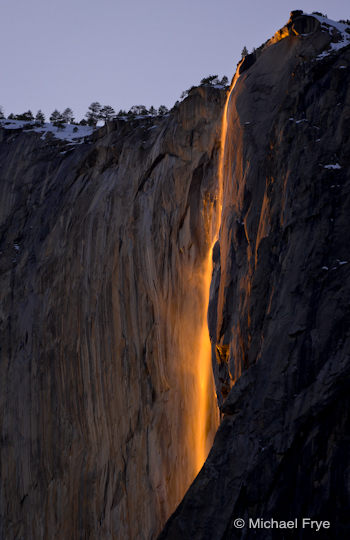 That special time of year is approaching, when children write letters to Santa Claus, people put colorful lights on the their houses and inflatable reindeer on their lawns, and… oh wait, wrong one. That other special time of year is approaching, when photographers of every stripe migrate to a sheltered valley in the Sierra Nevada, and Nikon and Canon users stand side by side in peace and harmony, hoping for a break in the clouds and a moment of magic. Yes, Horsetail Fall season is coming.

The forecast for the season is, well, iffy. After two months with no precipitation whatsoever, Horsetail Fall was completely dry. But last weekend two storms dumped over five inches of rain in Yosemite Valley, and that precipitation fell as snow up higher. Horsetail Fall is fed by snow melting from a small drainage on top of El Capitan, and there is now some snow there, finally. But that’s not enough—we need two or three more snow dumps between now and mid-February. Then we need a stretch of clear, warm weather at the right time to melt some of that snow, feed the waterfall, and allow the sun to cast it’s golden, late-day light on the water. Not too much to ask, is it?

So when is that right time? An excellent question, but a difficult one to answer. In January 2009 I put an article on my web site describing how I used one of the Yosemite web cams to determine the optimum time for photographing Horsetail Fall. This was the best method I could find since it’s difficult to get on-the-ground first-hand information in February (too many clouds!). I thought the best time was an eleven-day window from approximately February 12th to 22nd.

My observations last year, however, have led me to question that conclusion. I photographed Horsetail on February 11th, and again on the 15th, and I think even the 15th was too early.

The perfect Horsetail Fall photograph needs three things. First, there has to be enough water. Second, the sun has to be low in the sky when it’s still hitting the fall to give it that orange glow. Third, the cliff behind and to the left of Horsetail has to be in the shade when the water is on fire; the contrast between the backlit waterfall and dark background is what makes this event so dramatic.

While those web cam images were helpful in figuring out when the sun would be at its lowest angle when striking Horsetail, from that viewpoint you can’t tell whether the cliff behind the fall is in the shade. The only way to see that is to be on the ground at one of the Horsetail viewing locations on a clear evening at the right time of year. And my observations from on the ground last year showed that the cliff was not in the shade even as late as February 15th. So the best window has to start after February 15th. And I know that March 1st is too late—by then the nose of El Capitan blocks the sun before it sinks low enough to create that orange glow.

I’ve posted four images here, with dates, to show what I mean. The photograph at the top of the post was made on February 19th, 2009, and shows excellent conditions: enough water, that orange light, and the shaded cliff to the left of the fall.

The photographs below include ones I made last year on February 11th and 15th. The image from the 11th was made at the Southside Drive location. Even taking into account the low water level, too much of the background cliff is in the sun. (And note that this was the very last light—the sun had already left the bottom of the fall.) The photograph from February 15th was made from the other side of the valley (I call this spot “Rowell’s View), and again the waterfall doesn’t stand out very dramatically because that background cliff is lit. This image was made at 5:26, and sunset was 5:39 (the light was cut off by clouds before the sun hit the horizon), but I don’t think that shadow line could move that far in 13 minutes.

Finally you’ll see an image from February 22nd, 2010. Here the background cliff is nicely shaded, but the color is not as rich as in some other photographs. It’s hard to judge the color here though because this was a brief moment when the sun broke through clouds. If the skies had been clear the sun would probably have reached a lower angle, with more colorful light, before leaving the waterfall.

It’s hard to draw any definite conclusions from this scanty evidence, but I now think that the best window begins sometime after February 15th, and probably ends before the 25th. So I’ll say February 16th through 23rd until I gather more information.

You can actually help with this process. There are plenty of Horsetail Fall photos on the web, but few give the date they were made or include the EXIF data. So if you’ve captured a Horsetail Fall image with good light during the dates in question—let’s say from February 12th to 28th—post a link to it in the comments, or email a small JPEG to me, and include in the comments or email the date and time the image was captured. But please only do this if you’re sure the information is accurate; I know it’s all too easy to have the wrong time or date set in your camera.

Thanks in advance for your help! And good luck to all of you with Horsetail Fall aspirations this year. 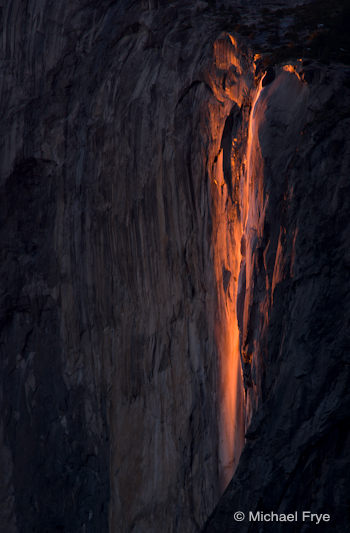 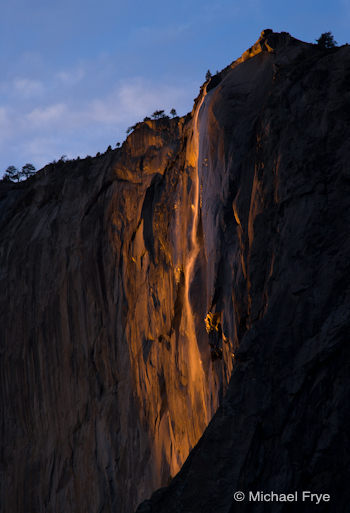 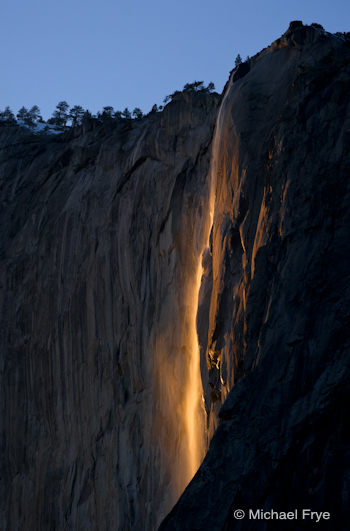