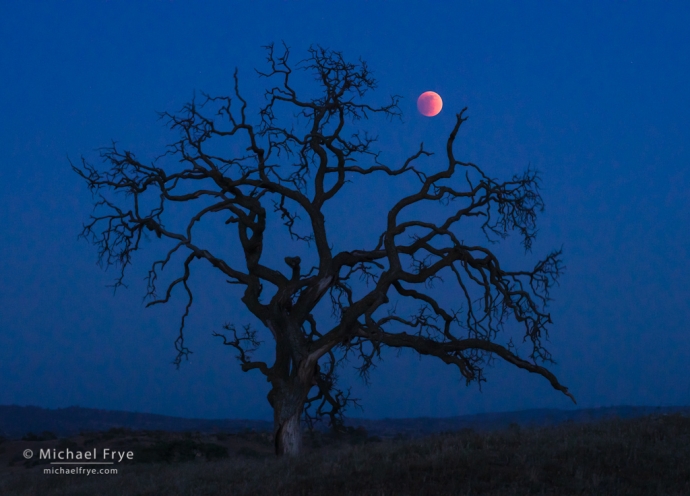 END_OF_DOCUMENT_TOKEN_TO_BE_REPLACED

Views From the Canyon 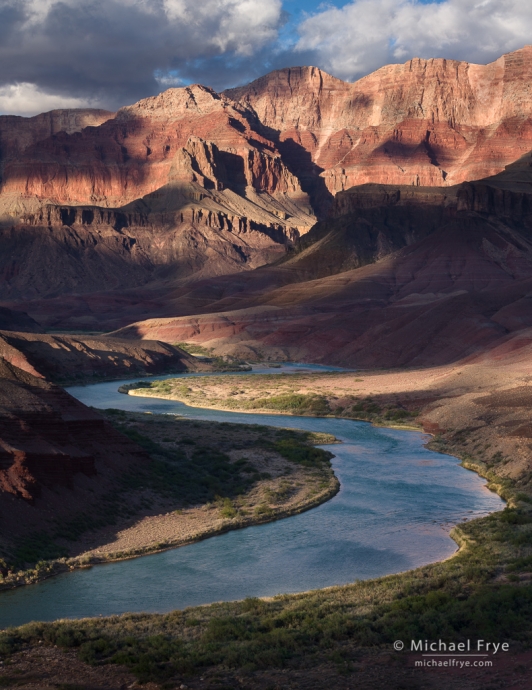 Dappled light along the Colorado River, Grand Canyon National Park. Watching the cloud shadows move across the canyon from this spot was one of the highlights of the trip for me.

Most people make their best photographs of places or subjects they’re familiar with.

In landscape photography, it helps immensely if you know an area well, and know what spots might work best under certain conditions, so you can put yourself in the right place at the right time.

I think it’s also natural and inevitable that we’re going to make our best and most meaningful images when we feel a connection with the subject or place. You can often trace a direct correlation between the depth of that connection and the depth of the imagery. And making those connections takes time.

END_OF_DOCUMENT_TOKEN_TO_BE_REPLACED

Through the Grand Canyon 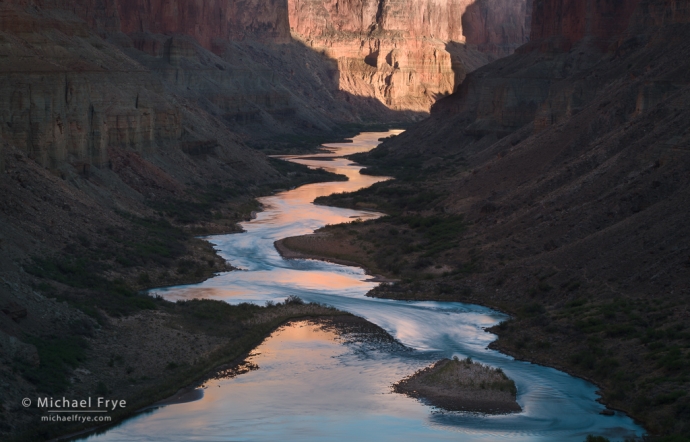 Claudia and I just emerged from the Grand Canyon on Thursday. What an incredible journey.

This was my second raft trip down the canyon, and it was just as wonderful as I remembered. Maybe even more so. As beautiful as the Grand Canyon is from the rim, the river is the beating heart of the canyon. We were deep in that heart for ten days, getting doused by the river’s (very cold) water in rapids, bathing in it, drinking it (filtered of course), and lulled to sleep at night by the roar of nearby rapids.

What made this trip even more special was the people we shared the journey with, including my amazing co-instructor, Jerry Dodrill, our wonderful guides Ed, Ellen, and Boh, and a super-nice group of photographers, who I’d now call friends for life. We couldn’t have asked for better companions.

END_OF_DOCUMENT_TOKEN_TO_BE_REPLACED 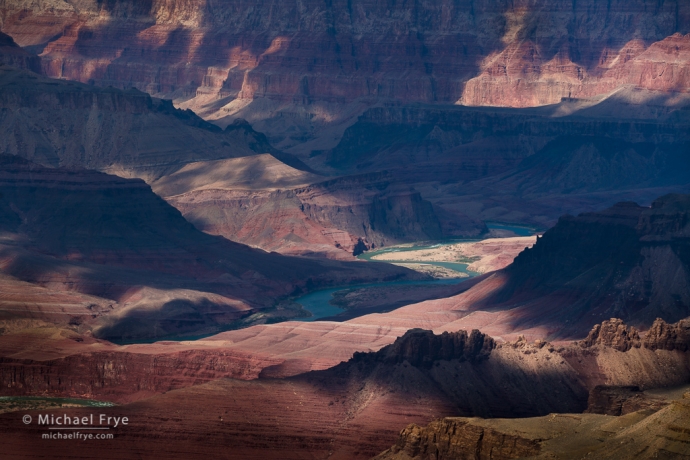 “We are three-quarters of a mile in the depths of the earth, and the great river shrinks to insignificance, as it dashes its angry waves against the walls and cliffs, that rise to the world above; they are but puny ripples, and we but pigmies, running up and down the sands, or lost among the boulders. We have an unknown distance yet to run, an unknown river to explore. What falls there are, we know not; what rocks beset the channel, we know not; what walls rise over the river, we know not.” — John Wesley Powell

Powell wrote those words to describe the challenge facing he and his eight companions as they began their epic journey through the Grand Canyon in 1869. They had already been traveling for two-and-a-half months down the Green and Colorado rivers, through territory that was almost completely unknown to Europeans at the time. They were low on food, their clothes had been worn to rags, and their boats were battered an in constant need of repair. Somehow, Powell and five of the men made it through the Grand Canyon, becoming the first to ever do so – as far as we know. (The three others decided to hike out of the canyon, and were never seen again.)

Of course the Colorado River through the Grand Canyon is well known now. Every mile has been thoroughly explored and mapped. But rafting down the river is still a great adventure.

END_OF_DOCUMENT_TOKEN_TO_BE_REPLACED 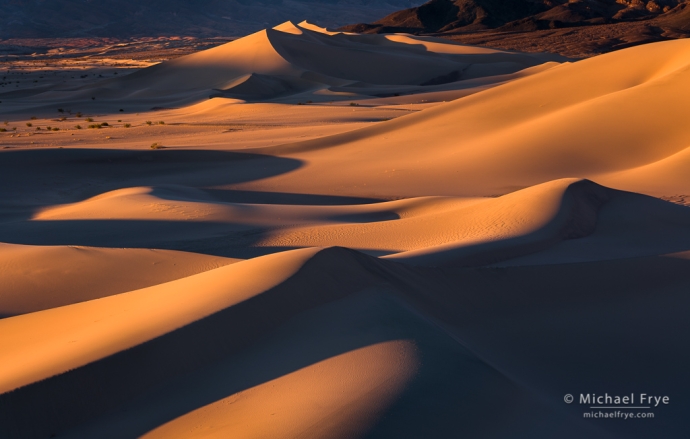 If you’ve been reading this blog, you know that I love sand dunes. Dunes make great photographic subjects, but it’s more than that. I love just being in the dunes. When walking out to the Mesquite Flat Dunes in Death Valley, there’s this moment when you move off of the surrounding salt crust and onto the sand, and suddenly it seems as if you’re in a different world – a special realm that’s magical, beautiful, and a little surreal.

Children also love sand dunes of course. What kid wouldn’t love playing in a giant sandbox? When our son Kevin was little we took him to sand dunes whenever possible – not just in Death Valley, but to the Oceano Dunes along the California Coast, to the Kelso Dunes, and to the Imperial Dunes near the border with Mexico. He loved playing the sand, and when he was old enough we took him up the highest dune in the Mesquite Flat Dunes, which was a great adventure, and big accomplishment for him.

END_OF_DOCUMENT_TOKEN_TO_BE_REPLACED 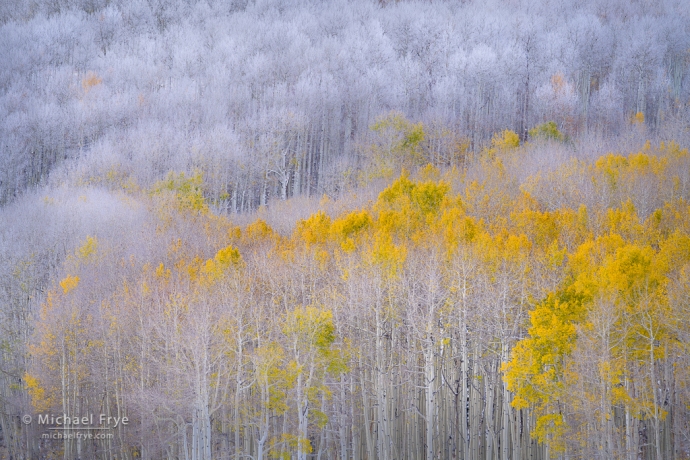 When posting my nominees for best photos of 2021, I realized that I hadn’t posted some of my favorites before. That’s especially true for images I made this fall. We traveled to Yellowstone, Colorado, Utah, and the Oregon Coast, with little break in between trips, and not much time to process everything and post the images.

For me, one of the special treats this autumn (among many!) was the opportunity to photograph autumn aspens with snow. I did write about our brief trip to the eastern Sierra in early October, where I got to photograph some colorful aspens coated with snow. And then we got to do that several more times in Colorado.