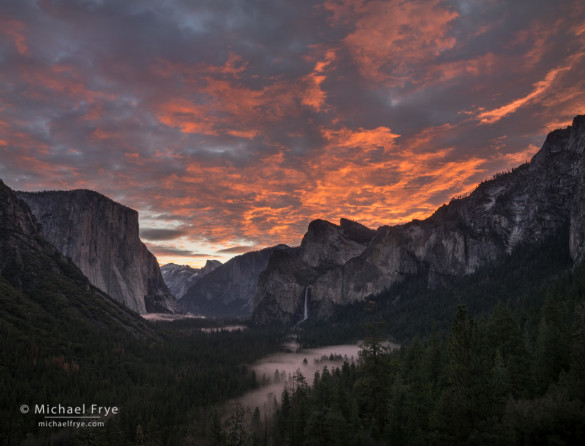 Yosemite Valley got about three inches of rain from the storms over the weekend. That’s not a drought-busting amount, but it helps, and I’m grateful for every drop.

The first wave of rain arrived Friday night, and lingered through Saturday. Early Sunday morning I looked at the satellite and radar images online, and saw thin, high clouds moving in ahead of the next system. Thinking that those clouds might light up at sunrise, I made the trip up to Tunnel View. Soon after I got there a bit of color appeared behind Half Dome, and then within minutes the whole sky caught on fire. It turned into the most colorful sunrise I’ve ever seen from that spot; you can see a photograph above.

The second wave of rain arrived Sunday evening. It started slowly, but around 9:30 p.m. a band of heavy rain passed through Mariposa County and headed toward Yosemite. I was actually out driving during this squall, and had to stop and pull off the road four separate times because it was raining so hard I could only see about 20 feet ahead.

Judging by the webcams, it looked like a pretty sunrise Monday morning in Yosemite Valley. Unfortunately I couldn’t get there because the torrential rain caused a rockslide which closed the road! I made it up to the Valley in the afternoon after the road reopened, and found the waterfalls roaring. Yosemite Falls looked more like May than February.

And yes, Horsetail was flowing too. It was barely trickling Sunday morning, but yesterday afternoon it was flowing well, at about average levels for February. There was enough water and wind to blow spray around, and make it possible to photograph Horsetail from an angle behind the cliff, as you can see in the photograph below. Without the wind I couldn’t have even seen the waterfall from this spot. 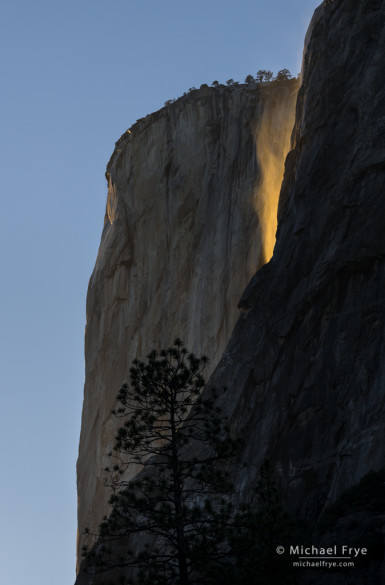 Unfortunately, the temporary boost from rain runoff will diminish quickly. Horsetail’s tiny watershed consists mostly of sloping granite slabs, with a few trees and pockets of sandy soil. A downpour in that drainage runs off like a bucket of water on a tin roof. The only thing that provides a sustained water flow is melting snow, and there is hardly any snow in Horsetail’s drainage. These were warm storms, and snow levels were above 9,000 feet during most of the weekend, well above Horsetail’s watershed. At the tail end of the second storm temperatures dropped, and snow fell down to around 7,000 feet. Parts of Horsetail’s drainage probably got a few inches of snow, but that will melt quickly.

So although the window of best light for Horsetail Fall is around February 16th through 23rd (I explain why in this post), this year it might be better to go before that. You won’t get ideal lighting, but at least you’ll have water. With no more precipitation in the seven-day forecast, I suspect the flow will be down to a trickle again by the 16th.

The same goes for the other waterfalls too. Yosemite Falls is gushing now, but will also diminish over the next week (although more slowly than Horsetail). But for the next few days there’s an opportunity to photograph it with lots of water and winter light. For example, you can see a rainbow on the Upper Fall from the east end of Cook’s Meadow early in the morning from the very eastern end of Cook’s Meadow, or catch low-angle morning sidelight on the falls from Swinging Bridge. (Of course you can find information about those locations, and the best spots to photograph Horsetail Fall, in my Photographer’s Guide to Yosemite book and app.)

I hope I’m wrong about Horsetail, and the flow lasts a couple of weeks. Or maybe we’ll get some more not-yet-forecast precipitation. We’ll see!