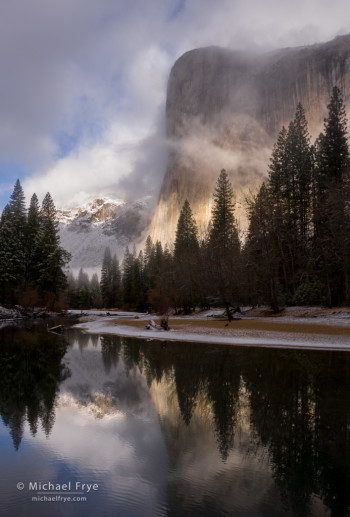 El Capitan and the Merced River during a clearing storm, Friday morning, Yosemite

A clearing storm in Yosemite Valley can be a memorable event, but not all clearing storms are equally photogenic. Some clear gradually, while others finish abruptly and spectacularly. Some storms clear at night, some in the middle of the day, but for photography you’d like the storm to clear just before sunrise or sunset.

Last Thursday, Yosemite Valley got two inches of rain, the first real precipitation in almost two months. Higher elevations got snow, and the temperature dropped enough to give the Valley a slight dusting at the tail end of the storm. The main part of the storm cleared around midday on Thursday – not the best time for photography, though still beautiful. But then showers resumed Thursday night, with the last of them moving through just before sunrise. Perfect timing.

My two brothers were visiting from Washington State, and the three of us rose early, drove up to Yosemite Valley, and headed for one of my favorite spots along the Merced River. The sun broke through the clouds and illuminated El Capitan briefly before the fog thickened and all the cliffs disappeared. But after about ten minutes El Cap re-emerged, the sun broke through, and we were treated to a classic Yosemite clearing storm. The first photograph here is probably my favorite from the morning, but I’ve posted a couple more images below, including a later image from Tunnel View – still a photogenic spot at 10:00 a.m.

We’ve seen a few showers since then, and the forecast calls for more precipitation this week – nothing major, but we’ll take it. There’s probably a foot of snow on top of El Capitan now, so prospects for Horsetail Fall later this month look better, though another foot or two of snow would be very helpful. The window for the best light on Horsetail Fall is around February 16-23, so there’s still some time. (For more about the light and conditions for photographing Horsetail Fall, go here and here.)

Did any of you photograph the clearing storm Friday morning in Yosemite? Or the midday break last Thursday? If so, I’d love to see some photos, so please post a link in the comments! 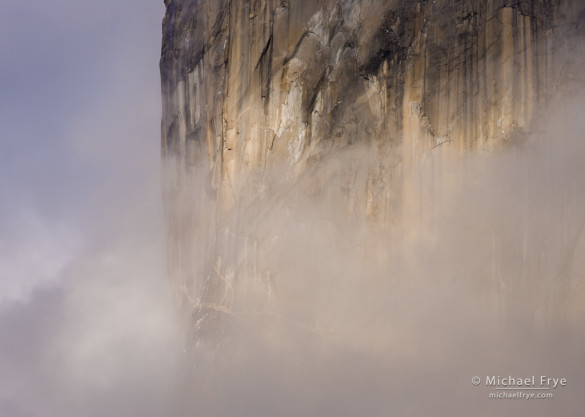 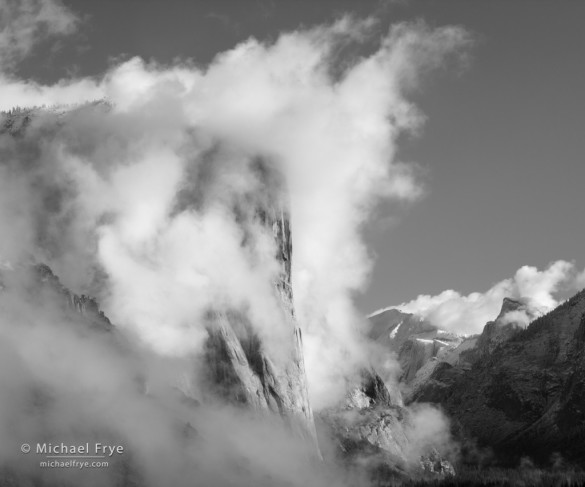