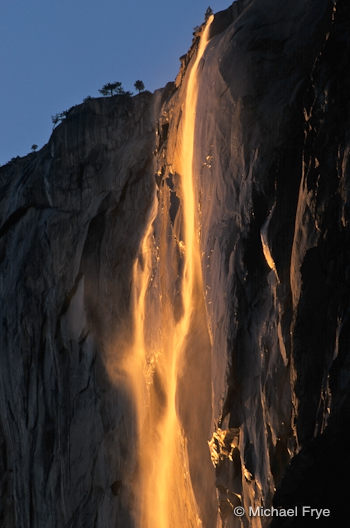 What makes Horsetail Fall so special? It seemed appropriate at this time of year to re-post this article from my 25 Years in Yosemite blog, where I talk about the photographic history of this waterfall, and the unique topography that creates the lighting phenomenon so many photographers have tried to capture:

Many people remember Yosemite’s firefall. On summer evenings from 1872 until 1968 the owners and employees of the Glacier Point Hotel pushed burning hot embers off the top of the Glacier Point cliff toward Yosemite Valley. The effect resembled a waterfall of fire. When the hotel burned down in 1969 the park service decided to end the ritual because this unnatural event caused visitors to trample meadows in their attempts to find a viewing spot.

I first visited Yosemite in 1980, so I never saw the firefall. On the park’s centennial anniversary in 1990 rumors spread that the park service would reenact the firefall, unannounced, but it never happened.

Yosemite, though, has an amazing natural “firefall.” For about ten days each February, if conditions are right, a thin ribbon of water dropping from the East Buttress of El Capitan, called Horsetail Fall, turns vivid orange when backlit by the setting sun.

Most waterfalls lie in amphitheaters, so even if they’re struck by the setting sun—or the rising sun for that matter—it would be impossible to stand on the other side of the water and see light shining through the fall. To view a backlit waterfall at sunrise or sunset, the fall has to descend over a high, open cliff so it can catch that early- or late-day light, and the cliff has to be oriented east-west (with the waterfall facing north or south) so that you can be looking through the water toward the sun—i.e., standing to the west of the fall looking east at sunrise, or to the east of the fall looking west at sunset.

How many waterfalls fit that description? Not many. I’ve never heard about another fall that turns orange or red at sunset. It may be that Yosemite’s unique topography creates the world’s only natural firefall. 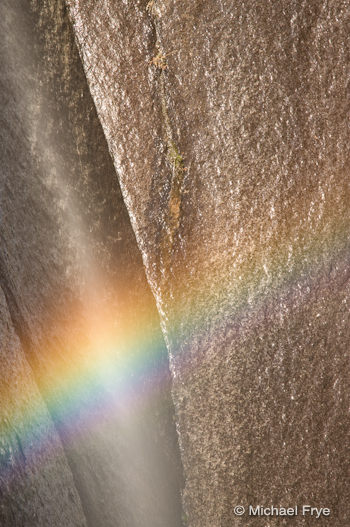 Rainbow at the base of Horsetail Fall

No one knows when this phenomenon was first discovered. John Muir, who made it a point to notice such things, never mentioned it in his voluminous writings. Ansel Adams made a photograph of Horsetail Fall in the 1930s in mid-afternoon light (he called it El Capitan Fall), but he never said anything about the color at sunset. The first documented discovery of the firefall phenomenon was by famed photographer Galen Rowell. His iconic image from 1973 is still a classic, and one of the photographs that made him famous. He describes spotting the golden light hitting the fall, then driving around the valley at high speed to photograph it, getting there just before the light faded.

Although Rowell’s image became well known, for many years few other photographers attempted to duplicate his work. Perhaps they assumed that the same conditions wouldn’t recur, or maybe they didn’t want to imitate someone else’s photograph.

But by the 1990s word began to leak out that this unique light on Horsetail Fall was visible every February under the right conditions. I certainly knew about it by then, and made the photograph that opens this entry in February of 1995. But I rarely showed this image to anyone, because I felt it was derivative, an imitation of Rowell’s famous work.

In 2000 I put Horsetail Fall in my book, The Photographer’s Guide to Yosemite (now also an iPhone app). But it was the growth of the internet that really brought Horsetail to the attention of photographers. People posted their versions of this scene on web pages, and later on photo-sharing sites like Flickr, and upon seeing these images other photographers decided they wanted Horsetail Fall photos of their own. Now hundreds—perhaps thousands—of photographers inundate Yosemite Valley each February to try to capture their own version of this famous scene. For most of the month it’s hard to find a parking spot at the two most popular viewing areas.

Perhaps the reason that this light show remained undiscovered for so long is because the right conditions are rare. In dry winters there isn’t enough water in this ephemeral fall. Even with sufficient snow on the summit of El Capitan—Horsetail’s source—the weather in February has to be warm enough to melt some of that snow and send it over the cliff. And in wet winters, the kind that produce sufficient flow, February is often stormy, and potential sunsets are frequently snuffed out by clouds.

When I made my photograph of Horsetail Fall in February of 1995 there was so much water pouring over the cliff that it formed a double waterfall, and it seemed that every evening was perfectly clear. But now I realize how unusual those conditions were. The window of best light is short—only about 10 days long. (This post discusses the timing of this window.) In many winters those days pass without a single good evening for viewing Horsetail Fall—either there’s not enough water, or clouds block the light. So most of the photographers who come to Yosemite each February hoping to photograph the “firefall” go home disappointed.

But its rarity makes this event more special. No one who has ever viewed it will ever forget the sight of neon-orange water cascading down a 1500-foot-high cliff. The firefall from Glacier Point may never return, but the unique natural incandescence of Horsetail Fall should be visible for centuries to come. 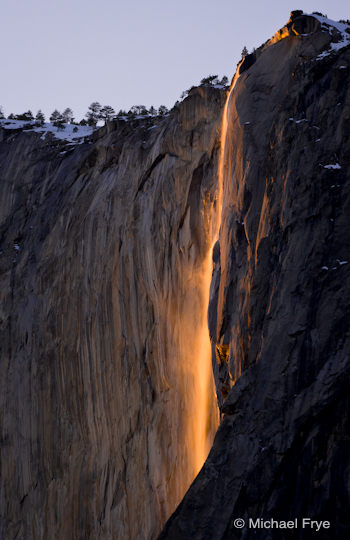 Horsetail Fall, February 19th, 2009 (the one good evening that year)