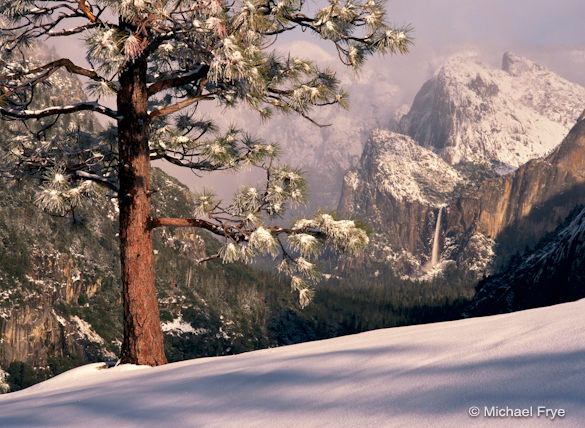 February light on Bridalveil Fall from near Turtleback Dome

First, I’m going to have a big announcement later this week—stay tuned!

Next, I’ve been getting lots of questions about Horsetail Fall. Since my last post about this not much has changed; there is little water in Horsetail right now. There’s snow in the forecast for tonight and tomorrow, so that should help, but they’re only predicting 6-8 inches, and I don’t know whether that will be enough to make a significant difference. If the weather warms immediately afterward and melts some of that new snow the water volume could get a bump, but it’s likely to be short-lived.

But there are other things to photograph in Yosemite in February. That storm is predicted to be a cold one, which means fresh snow in Yosemite Valley. And when the storm ends we could see some nice clearing storm conditions.

Even without snow and mist there are always things to photograph. Yosemite Falls is flowing fairly well, and gets nice early sunlight throughout the month. You may still be able to see a rainbow on the upper fall when the sun first hits it in the morning from the very eastern end of Cook’s Meadow, near Yosemite Village, or the Ahwahnee Meadow.

As we get closer to the spring equinox Cathedral Rocks and Bridalveil Fall get more afternoon sunlight. This means that late-day photographs from Valley View (aka Gates of the Valley) and Tunnel View have better balance than at other times of year—the sun hits both El Capitan on the left and Cathedral Rocks on the right.

And of course there are always interesting details to photograph, like ice and reflections along the Merced River. So if you make a trip to photograph Horsetail Fall and find there’s not enough water, don’t despair. It’s still Yosemite!

Naturally all the details about the best light in February, and throughout the year, can be found in my book and iPhone/iPad app versions of The Photographer’s Guide to Yosemite.