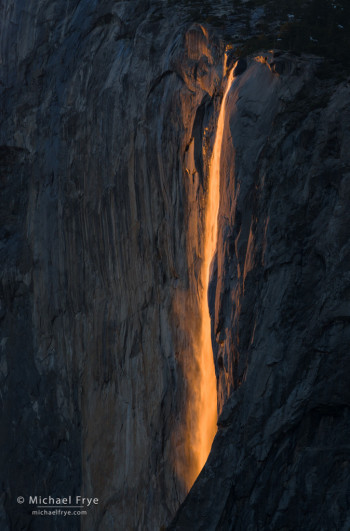 February has been completely dry around here so far, with very warm temperatures. That warm weather has been melting the snow on top of El Capitan and creating a strong flow in Horsetail Fall – easily the most water in the fall since 2010. Yesterday was another clear, warm day (the high in Yosemite Valley was 67 degrees), with nearly ideal conditions for Horsetail. I wondered when I might see such conditions again, so I decided to head up to Yosemite Valley.

A first-hand look at Horsetail actually revealed less water than I expected. With the exceptionally warm weather we’ve been having I thought Horsetail would really be gushing, perhaps even approaching the high flow shown in this photograph from 1995. But nevertheless it was flowing well. I’d say the water level was a little above average for February (and, of course, way more than anything we’ve seen during the last four years of drought).

I decided to go to Southside Drive, since the only photographs I’ve made from that area were during the drought, with meager water flow. People had told me that traffic was terrible over the weekend, so I was prepared for the worst, but the traffic and parking weren’t bad at all. The park service had blocked off a lane on Southside Drive for parking, which helped. (I saw later that they blocked off a lane on Northside Drive too.)

Some high clouds sliding down from the north late in the day dimmed the light occasionally. But Horsetail lit up nicely between about 5:20 and 5:27, and the wind played with the spray a bit, making the fall look bigger. Then the light dimmed, no doubt blocked by a thin cloud out to the west. Around 5:35 the glow intensified again, and we got another couple minutes of strong, colorful light before sunset (which, depending on which app you consulted, was at 5:37 or 5:39) – though the wind died, and the water fell straight down. All in all it was a very good night for Horsetail.

The window of best light on Horsetail extends for about another week, until maybe February 23rd. A storm is expected to arrive this afternoon – our first storm in weeks. Snow levels are forecast to start off around 8,000 feet, which is above Horsetail’s drainage. The rain will temporarily increase the runoff, but toward the tail end of the storm the snow level is expected to drop to around 5,000 feet. That means more snow to help feed the fall, but the lowering temperatures will also slow the melting and diminish the flow. There should still be plenty of water, but probably not as much as during the last few days. After the storm exits on Thursday the temperatures are predicted to warm gradually, climbing back up into the upper 60’s by Tuesday, which should kick Horsetail back into high gear for the tail end of the window.

Skies will probably be overcast this evening, but there’s a chance they could clear in time for sunset tomorrow. After that it’s expected to be sunny, though often after a storm we’ll get into a pattern where condensation clouds build up late in the afternoon along the west end of Yosemite Valley, blocking the light. That can be frustrating if you’re trying to photograph Horsetail. Skies will be clear all day, then just as the light is starting to get good the clouds move in and the light disappears. But sometimes the sun can break through those condensation clouds for a brief minute or two, so don’t give up.

As long-time readers know, I’ve been trying for many years to nail down the best dates for photographing Horsetail Fall. I’d reached the conclusion that the window of best light starts about February 16th, and my observations last night seemed to confirm that. The photograph above, captured at 5:27, shows some light hitting the cliff behind (and to the left of) the top of the fall. The photograph below, taken at 5:37, shows the ideal, classic Horsetail Fall light, with only the waterfall lit, making it seem as though the fall were glowing with its own inner light: 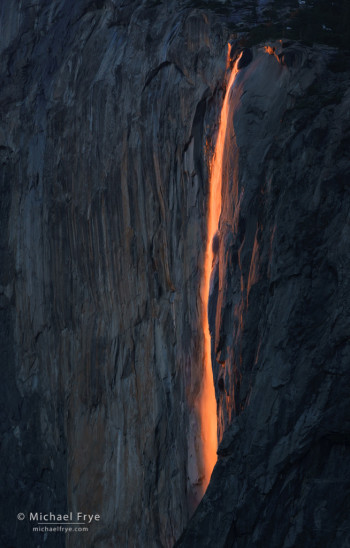 So that perfect, classic light can happen on February 16th, but only just before sunset. Observations from past years have shown me that it doesn’t happen at all a couple of days earlier, not even at the last possible moment before sunset. Over the next week or so, as the sun sets a little further north and a little later each day, that shadow line to the left of Horsetail (created by the Nose of El Cap) will reach the fall earlier – ten minutes before sunset, then fifteen minutes, then twenty minutes. That creates a longer window for capturing that ideal light, but eventually the very last light on Horsetail (assuming perfectly clear skies) will become less colorful. Up until February 20th (or perhaps a day or two longer) it’s possible to see red-orange color on Horsetail with the very last light, but after that the Nose of El Capitan will begin to cut off the light before the sun reaches the horizon, so after about the 23rd the most intense color will be orange. By March 1st the most intense color will be gold, and by mid-March there won’t be any color to speak of. It’s hard to determine an exact cutoff date, because the light doesn’t change greatly from one day to the next, but there’s definitely a big difference between February 20th and March 1st.

Of course I’m nitpicking this. The light for the photograph at the top of this post is pretty striking, despite the sun hitting a small portion of the cliff behind the fall. And I saw some photographs of Horsetail from this past Saturday (February 13th) that looked great because the wind really kicked up and blew the spray around, making the fall look bigger, and mostly hiding the cliff behind the fall. So with enough water, and some wind, the days around mid-February can be great. At the other end of the window (around maybe February 23rd to 25th) you may not get that red-orange color, but you can still get some intense orange, and that can often be more striking. By the time the sun gets low enough to create the red-orange color on Horsetail it’s sunk into haze, dampening the intensity of the light a bit (unless the skies to the west are exceptionally clear). The neon-orange color that you can get about ten minutes before sunset usually has more contrast and intensity.

So there you have it: more information than you ever wanted to know about this famous, tiny waterfall. This looks like the best year for photographing the Horsetail lighting event since at least 2010. If you come this weekend, be prepared for traffic jams and large crowds. 🙂 For information about where to photograph Horsetail Fall, see this post.