The Third Dimension in Photography 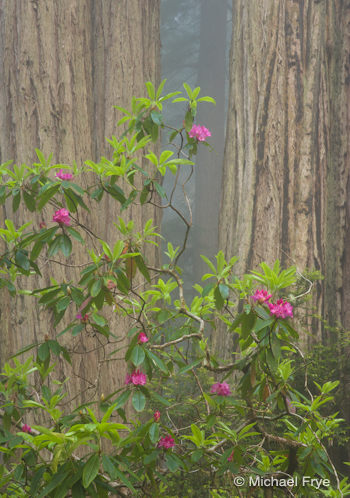 A Tale of Two Photographs

Reading David duChemin’s eBook A Deeper Frame got me thinking about how we perceive depth and space in photographs, and how lens choice affects that perception.

David says that because photography turns “a world of three dimensions into two,” that “if we aim to create photographs that create within the reader a deeper, fuller, longer experience, it falls to us to recreate that depth.”

There’s no question that wide-angle lenses are better tools for creating a sense of depth in a photograph than telephoto lenses. Telephotos make objects appear closer together than they really are, compressing space and flattening the perspective. Wide-angle lenses make objects appear farther apart than they really are, expanding the sense of space, and, if used correctly, creating an illusion of depth.

These two photographs from my recent trip to the redwoods illustrate the difference. Both images include the same rhododendrons and redwoods.

In the top image I stepped back with a telephoto lens (130mm) and isolated part of the bush against two redwood trunks. It looks like the rhododendrons are only a few feet in front of the trees, but they’re not. They’re at least 20 feet away—illustrating the compression effect of the telephoto lens. The sense of depth is minimal. 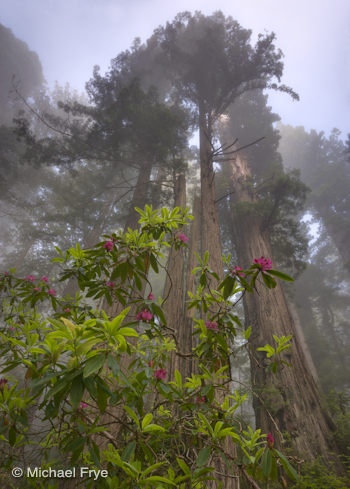 In the next photograph (left) I moved underneath the rhododendron bush and looked up. The focal length was 22mm, and here there’s a considerable sense of depth. What creates this illusion? First, there’s the size difference between the foreground and background. Even if you’ve never been to a redwood grove before, everyone knows that trees are bigger than flowers and leaves. Yet in the photograph the flowers and foreground leaves look relatively large compared to the trees. This gives us a visual cue that the rhododendron bush must be much closer to the camera than the redwoods. Second, the long, converging lines of the trunks, leading to an invisible vanishing point in the sky, create perspective, enhancing the illusion of depth, distance, and, in this case, height.

Which image is better? That’s hard to say. The wide-angle version certainly shows the height and size of the redwoods better. But the telephoto image is simpler, cleaner, and communicates the essential ideas—redwoods, rhododendrons, and fog—more directly. It even conveys some sense of place, although probably not as much as the wide-angle photograph.

David calls wider lenses “inclusive,” and telephotos “isolation lenses.” I think that sums things up pretty well, and points out the benefits and drawbacks to each.

Wider lenses automatically tend to include more, and if used well, invite the viewer into the photograph. On the other hand, the single most common photographic mistake is including too much in the frame—cluttering up the image with extraneous junk. And that’s all too easy to do with short focal lengths. It takes skill to use wide-angle lenses well because it’s so hard to keep the compositions simple.

Of course it takes skill to use telephoto lenses also, but longer focal lengths encourage you to simplify, and include only the most essential elements of a scene. The word “isolation” usually has a negative connotation. But in photography our task is to take an infinite and chaotic world, put a frame around a little piece of it, and make that rectangle communicate a mood, or a feeling—or at least be interesting. Isolating the most essential elements of an idea, the ones that tell the story most vividly, can be a good thing.

Other Ways to Create Depth

Of course David rightly points out several ways to create a sense of depth that aren’t lens-specific, such as through focus, color, light, and the emotional power of the subject.

I’ll point out another: atmosphere. My favorite photograph from my recent trip to the redwoods was made with a moderately-wide focal length (33mm), and while I think it has a considerable sense of depth, it doesn’t use optics, or perspective, to create that. The fog does that almost automatically, making the trees fade and recede into the distance. Haze can do the same thing in expansive landscapes.

When “Flat” is a Good Thing

But flat images, without much sense of depth, can also be effective. Think of M.C. Escher’s “Symmetry” drawings (click the link and go to “Picture Gallery,” and then “Symmetry”). Here’s an example from my own portfolio, where I used a 200mm lens to compress the space, flatten the perspective, and create a pattern out of ice and water. Such images tend to be more abstract, and less about mood than about creating a visual surprise, but I like them on that level. 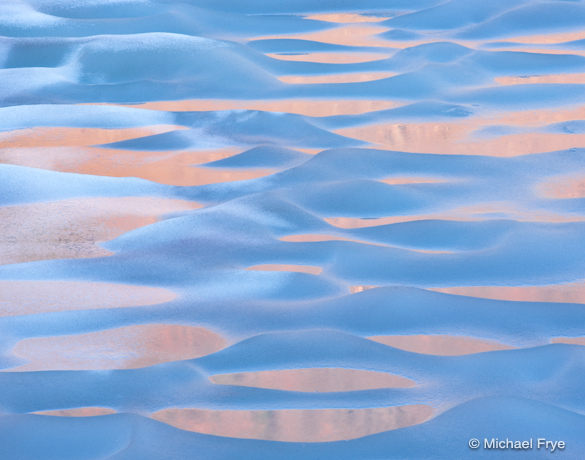 And here’s another example—a very different one—of how compressing space can work to your advantage. These light-painted cacti are actually much farther apart than they look. The red one just right of center, for example, is at least thirty feet from the central cactus. A short telephoto lens (150mm on 6×4.5 cm film) compressed the space and brought these cacti into closer visual proximity with each other, creating a cohesive composition out of widely-scattered elements. 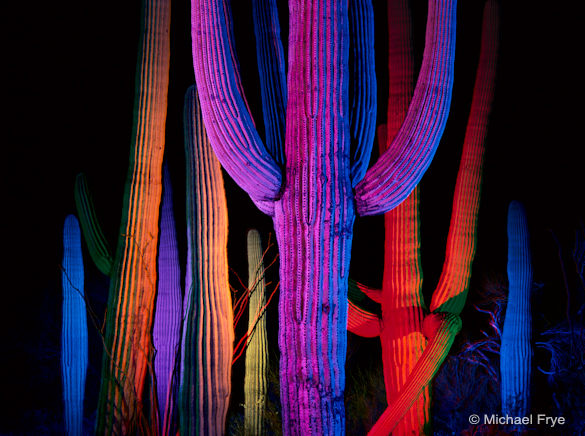 A sense of depth can certainly add another dimension to a photograph (pardon the pun). But the simplicity and flatter perspectives created by telephoto lenses can also be effective arrows in the photographer’s quiver. One isn’t better than the other—it’s more a matter of choosing the right tool for the job at hand, the perspective that conveys your idea best. Learn to use both these tools well—to create a sense of depth with wide-angle lenses, and compress space with telephotos—and you’ll become a more effective communicator with your camera.

I tend to use long focal lengths more often than short ones (I wrote about that last August), but reading David’s book may make me rethink that, and try to incorporate more depth into my images. What about you? Do you find yourself gravitating to one perspective or another, or do you make “inclusive” and “isolating” photographs with equal frequency? Do you think about depth in your images—about creating the illusion of depth, or deliberately flattening the perspective? Post a comment and let us know.