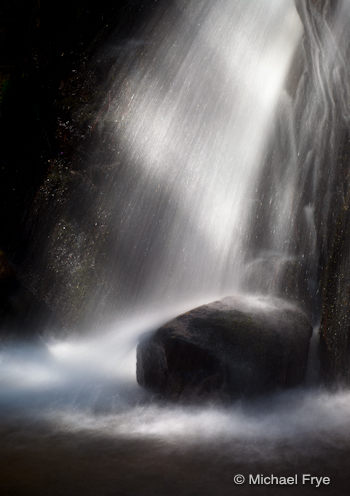 Everyone develops routines and habits: waking up at the same time every day, eating the same thing for breakfast, taking the same route to work… and on and on. Routines are beneficial in some ways—they help us avoid spending time and energy making small, unimportant decisions every day.

In photography, routines can help with the technical, left-brained stuff. Always putting lens caps in the same place in your camera bag, or the same pants pocket, can help save time and avoid frustration. Checking off a mental list before pressing the shutter can prevent mistakes. Did you adjust the polarizer? Focus? Set the right aperture? Shutter speed? Did you check the histogram? What’s your ISO?

But routines also dull the senses, and in photography that can be deadly. I’ve photographed this small waterfall in Yosemite many times, but always in the shade. Soft light works well for subjects like this—it makes it easy to use slow shutter speeds, and simplifies the lighting. So I’d never even considered visiting this spot when sunlight was hitting the water.

Last weekend I was shooting footage for some instructional videos in Yosemite Valley. I wanted to talk about using slow shutter speeds with moving water, but the crew only had one day in Yosemite, and the schedule only allowed us to visit this waterfall at noon. As we approached the fall I thought, hmm, this might work. Backlight filtering through the trees created some interesting patterns, and as the sun moved it started to highlight just the right spots. As I was demonstrating how different shutter speeds affected the appearance of the water, I was looking at the images on my viewfinder and thinking, “Wow, that looks pretty cool!”

So a tight shooting schedule forced me out of my routine, we visited a familiar spot at an unfamiliar time, and I ended up making perhaps my favorite image of this waterfall yet. Which makes me wonder: what other mental ruts have I fallen into, and how can I get out of them?

While the left brain likes routines, the right brain—the creative side—needs stimulation. We all fall into photographic ruts, preferring certain lenses, or the same kind of light, or particular subjects. Even when visiting a new location we tend to photograph it in the same way as the last spot. But all it takes to break out of that routine is to try something new. Use the “wrong” lens. Photograph in “bad” light. Fill the viewfinder with mostly empty space—and make it work. Put your subject in the center—or on the edge of the frame.

I’m going to give myself an assignment: to identify my own photographic rules and boundaries, and break them. What are some of your boundaries? How could you break your routines and stimulate your imagination? I’d love to hear your thoughts about this.

Related Posts: The Third Dimension in Photography; Capturing a Mood