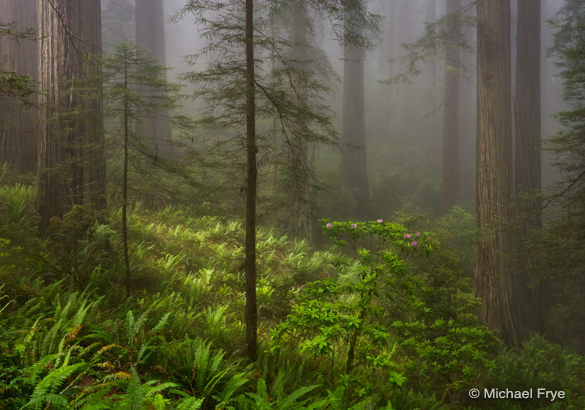 Redwoods, ferns, and rhododendrons near the northern California coast

Last week my wife Claudia and I visited our son Kevin in Arcata, California (he goes to Humboldt State University there). Arcata is just north of Eureka, along the northern coast of California, in redwood country.

Eleven years ago we’d camped in this area, and hiked a beautiful trail through the redwoods (nine-year-old Kevin complaining the whole way, especially on the steep climb back). The next morning I returned alone with my camera, found the forest enveloped in dense fog, and made one of my favorite photos ever.

I’d never gone back to that spot, but forecasters predicted patchy fog for last Wednesday morning, and it seemed like a good time to go. So we rose early and drove through fog, then sun, and back into fog. As we neared the trailhead I caught a glimpse of a roadside redwood grove that took my breath away. In the fog it was just so beautiful, so… primeval. I felt I’d traveled back in time a million years.

That feeling persisted as we walked along the trail, underneath 300-foot redwoods disappearing into the mist overhead. It smelled damp and earthy, and the only sounds were the soft, echoing calls of birds.

Claudia and Kevin continued down the trail while I became completely and happily absorbed in photographing redwoods and rhododendrons. I eventually found the spot where I’d made that photograph eleven years ago, and it looked exactly the same—the same trees, the same fog. But I wasn’t interested in repeating myself, and concentrated on capturing juxtapositions of redwoods and rhododendrons, and on areas where the sun was breaking through the mist. I made many photographs that morning; I’ll show you more in a later post. But my favorite is the one here, because to me it perfectly captures the mood of this place.

The feeling here is very different than in the photograph I made eleven years ago. This combination of sunlight and fog is more uplifting, where the eleven-year-old photo, with thick fog but no sunlight, is more mysterious. But it doesn’t matter to me, really, what the mood is—as long the photograph has one. While I’m happy to make photographs that are just pretty eye-candy, what I hope to do, strive to do, every time I pick up my camera is to convey some kind a mood—to show not just what something looked like, but how it felt to be there.

This is not surprising. Communicating a feeling through a photograph—a mere flat rectangle with lines, shapes, tones, and (sometimes) colors—is not easy. But it can be done.

How? Partly by understanding light, making strong compositions, getting the right exposures—in other words, developing your eye and technique. As you gain experience, you’ll learn how simple visual elements like lines or colors can convey feeling. (I write about this in my book, Digital Landscape Photography.)

Luck also helps. I found a great combination of light, weather, and subject last week. But this wasn’t just good fortune. I paid attention to the weather forecasts, and chose a location near to the coast, where fog was more likely. And yes, I also knew the rhododendrons would be blooming.

Another piece of the puzzle is how you feel about what you’re photographing. I talk about this in the “Photographs That Inspire” post that I linked to earlier—how you can’t expect to make images that inspire others unless you’re inspired yourself. And that means photographing things you’re passionate about. I was walking around this redwood forest in absolute awestruck wonder last week, and when you feel that strong a connection with your subject, it’s bound to show in your photographs.

In David duChemin’s eBook that I reviewed yesterday he writes about creating depth in photographs, and gives many practical suggestions for doing that. But he ends by talking about conveying “deeper emotions,” and saying, “Don’t look for depth, look for the things that move us.” Well said.

But here’s the most important, essential step to capturing a mood in your photographs: try. We often walk around with a camera looking for an interesting subject, or thinking about the exposure, or wondering what filter to use, and forget why we’re doing those things. For me, the overriding “why” is to communicate a feeling. This doesn’t happen every time I pick up a camera—far from it. But I try—I try to photograph things I’m passionate about, and I look for special situations where light, weather, and subject give me a chance to capture a strong mood. If you look for mood, you’ll find it.