Creating Depth: Beyond the Wide-Angle Formula 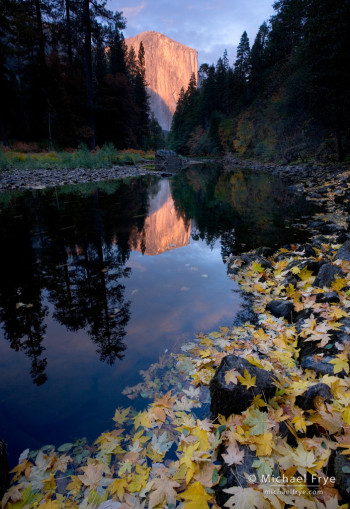 Depth can be a powerful tool in photography. Our medium is two-dimensional, but a sense of depth, an illusion of space and distance, can make the viewer feel like part of the scene, and literally and figuratively add another dimension to a photograph.

This image of El Capitan follows a common formula for creating a three-dimensional effect in landscape photographs: find an interesting foreground (preferably with some leading lines), get the camera low and close to that foreground, and use a wide-angle lens.

A wide-angle lens by itself can’t create a sense of depth. Wide-angle lenses make things look smaller, and therefore more distant, but if everything looks small and distant there’s no sense of depth. The 3-D effect only happens when you put the wide-angle lens close to something in the foreground. That proximity makes the foreground look big, but things in the background still look small. The optics create an exaggerated size difference between near and far objects, and our brains interpret that as depth and distance.

This wide-angle, near-far look is common today, but it wasn’t always so. Though he wasn’t the first to use this perspective, master landscape photographer David Muench popularized this technique through his many beautiful books, and a lot of people have followed his lead.

But this look has become so popular that I think landscape photographers have stopped looking for other ways to create a sense of depth, and by doing that we’ve limited our options. We owe it to ourselves and our viewers to explore other paths, and create images with depth and meaning that go beyond this one formula.

Other Ways of Creating Depth

In his eBook A Deeper Frame David duChemin suggests some alternatives. He talks about the obvious ones of course, like perspective and optics, but also discusses some less-obvious techniques like using color, light, and selective focus. I won’t elaborate here, as it’s better to hear it from David, and the eBook is only five dollars.

But after reading David’s book, and writing a post about the third dimension in photography, I couldn’t help thinking that there must be even more ways of creating depth that we landscape photographers haven’t taken advantage of.

About a year ago, while visiting the Getty Museum, I encountered this JMW Turner painting of Rome. I was struck by its great sense of depth. (It helps to click on the image and see it larger, though viewing the original is much better.) It doesn’t use a wide-angle perspective, which was unknown before the advent of photography. The angle of view is similar to a “normal” lens — i.e., 50mm on a full-frame sensor. 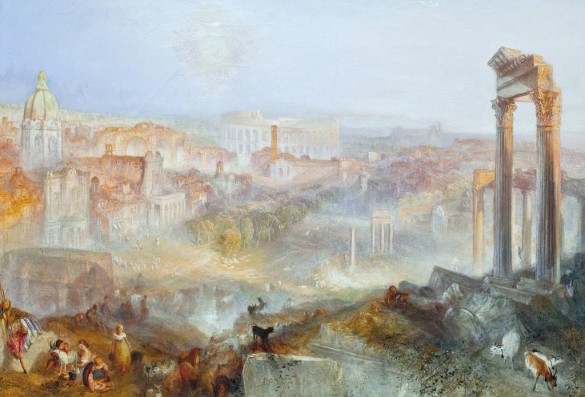 Turner created depth with an older formula: he included a foreground, middle ground, and background. This arrangement helps produce a size comparison: we see that people and structures near the bottom of his canvas look larger than similar objects in the middle, implying that the smaller objects are more distant. You might also notice some subtle perspective lines that converge near the center of the painting. And Turner added smoke or haze; notice how the shadows are darker and the contrast stronger in the foreground, while the background colors and contrast are faded, an atmospheric effect that adds to the illusion of depth and distance.

This got me thinking, and I started looking for images from our own medium that had depth, but didn’t depend on a near-far, wide-angle perspective. It didn’t take long. My favorite Ansel Adams photograph, Clearing Winter Storm, has, I think, a great sense of depth, but it was made with a “normal” lens (12 ¼ inches on an 8 x 10 camera, roughly equivalent to a 45mm lens on a full-frame sensor), and the closest objects, the foreground trees, are at least a hundred feet away.

Like Turner’s painting, Clearing Winter Storm has atmospheric effects — the mist in the distance. It also has a foreground, middle ground, and background, setting up a size comparison between the relatively large trees near the bottom of the frame and the smaller ones in the middle.

Ansel again used a normal lens (the same 12 ¼ inch model) for Mt. Williamson, Sierra Nevada, from Manzanar. The foreground here is more prominent, but not pushed into the viewer’s face. Beyond, there’s a middle ground and background, plus, once again, atmospheric effects. But one of the strongest three-dimensional cues here is the repeating shapes of the foreground rocks that gradually diminish in size in the distance.

I don’t want to compare myself to Turner and Adams, but I’ll show this example to demonstrate that we mortals can do this too. This photograph of redwoods and rhododendrons from my own files has all of the elements we just discussed. The atmospheric effect — fog — is obvious. There’s a foreground, middle ground, and background (though not a distant background), and a repeating element that diminishes in size with distance: the ferns. The focal length was 32mm on a full-frame sensor, only slightly wider than a normal lens. 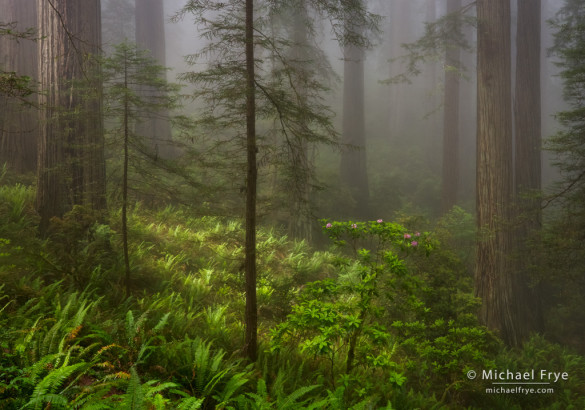 Redwoods, ferns, and rhododendrons near the northern California coast, USA

A near-far juxtaposition can create a feeling of depth even with a telephoto lens, as in this image of Bridalveil Fall and a Jeffrey pine. I used a 150mm lens on 645 film, equivalent to about a 90mm lens with a full-frame sensor. There’s really no middle ground here, but the nearby tree looks much larger than the cliffs and waterfall, so our brains assume there must be a great distance between the foreground and background. 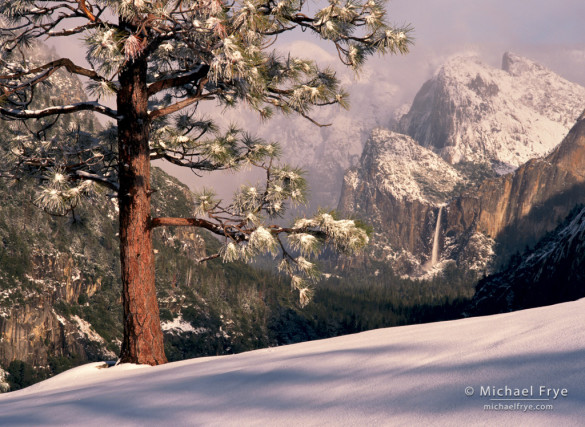 Leading lines, converging lines, and s-curves — those visual cues about perspective and distance — can also work with telephoto lenses. This winter scene along the Merced River uses those elements to create a subtle but palpable sense of depth. Of course it also has a little mist for atmospheric effect. You might say that there’s a foreground, middle ground, and background here, though I think that’s stretching it a bit. The focal length was 91mm on a full-frame sensor. 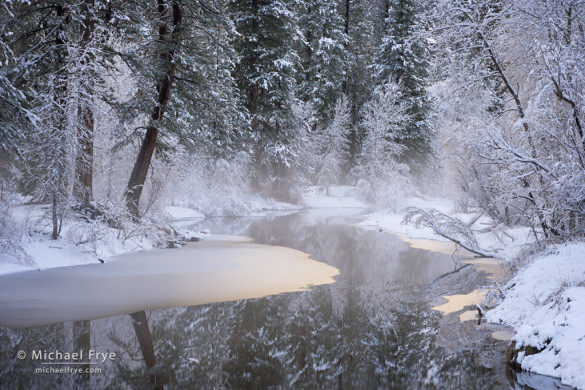 There’s another element, a tool for creating a sense of depth, that I haven’t mentioned yet, but most of the images I’ve shown or linked to so far have it. It’s related to the artist’s vantage point. Can you guess what it is before reading further?

What I’m alluding to is that most of these images were made from an elevated position. The photographer or painter was on a hill, or a rise of some kind. This height helps visually separate the foreground, middle ground, and background, and makes perspective lines and size comparisons more apparent.

It doesn’t have to be a big hill; a slight rise is enough. For the last image of the Merced River I was standing on Swinging Bridge, about 15 feet above the water, high enough to show the converging lines of the river’s banks and the s-curve — a perspective you wouldn’t see if the camera had been placed at water level.

Following this paragraph you’ll find two images of El Capitan. The first was made near the edge of the Merced River. The second was captured nearby, but on top of an embankment which provided an elevated vantage point. I think the second image has a greater sense of depth. Notice how the banks of the river in this second photograph converge, and the trees on the right diminish in size as they recede into the distance. Interestingly, I think this 3-D effect also makes El Capitan look taller. 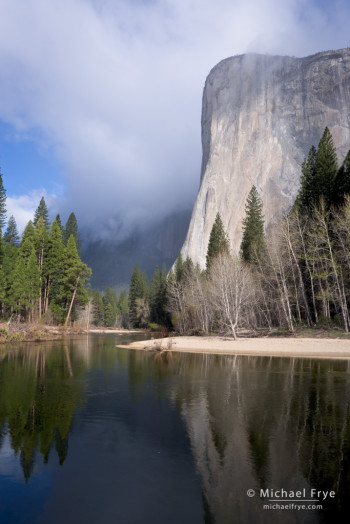 For the image of redwoods and rhododendrons above I was also standing on a rise, with the tripod as high as possible, looking over a small swale. It might not be apparent when viewing the photograph, but the ground sloped steeply down from my feet to a point just beyond the rhododendron bush, where the terrain rose again toward the most distant redwoods. This elevated position helps the viewer see over the foreground ferns and into the swale, and sets up the visual size comparison, where the ferns in the lower-left corner look relatively large, then diminish in stature toward the middle of the frame.

For the wide-angle, near-far look I talked about at the beginning, you actually take the opposite approach — you put the camera low to the ground to make the foreground appear larger and more prominent. But that low position often hides or diminishes the middle ground. If you’re trying to create a sense of depth with a normal or telephoto lens, or even with a less-exaggerated wide-angle perspective, gaining elevation helps by visually separating the foreground, middle ground, and background, which makes perspective lines and size comparisons more apparent.

The last thing I want to do is replace one formula with another. Not every landscape needs a foreground, middle ground, and background. Elevated viewpoints, atmospheric haze, near-far juxtapositions, and perspective lines are entirely optional. These are just a few ideas, ones that I hope will get you thinking about different ways to create depth. I’m sure we’ll find many other depth-enhancing techniques once we start looking for them. If you have any ideas please let me know.

And while depth can add power to a photograph, it shouldn’t be a goal in itself. The goal is to make expressive images, and a sense of depth isn’t a requirement for this. Some of the world’s greatest landscape photographs have no foreground or middle ground, no atmospheric haze, and little sense of depth. Think of Ansel’s Moon and Half Dome, or Galen Rowell’s Last Light on Horsetail Fall.

As Ansel and Galen understood, sometimes it’s better to embrace photography’s true nature and let the image be graphic and two-dimensional. These classic images don’t need an illusion of physical depth because they have something more vital: emotional depth. Make images with great depth of feeling and no one will care what lens you used.