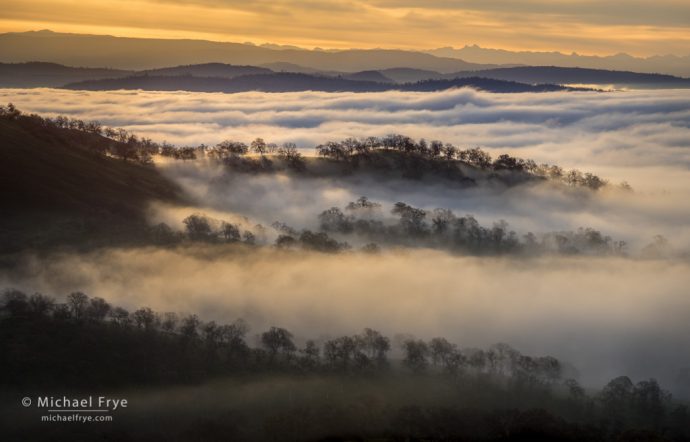 But it is possible to make images with a sense of depth using telephoto lenses. A telephoto landscape may never have the immersive feeling that a well-done wide-angle view might, but it may still be able to convey some feeling of depth – along with, perhaps, the kind of patterns that long lenses are so good at emphasizing.

You can suggest depth with any lens by showing near-far juxtapositions and atmospheric effects. Showing a near-far juxtaposition with a telephoto lens usually requires a far-away background in order to show a significant size difference between near and far objects. That means finding an elevated vantage point with a distant view, or a wide-open space like a prairie or seashore.

In the photograph above, made with a fairly long telephoto lens (170mm), I was able to climb a hilltop in the Sierra foothills to get above the fog and look southeast toward the peaks of the southern Sierra, over 100 miles away. Despite the telephoto compression, the extreme distance between the foreground and background allows you to see size differences between foreground and background objects, as both the trees and ridges look smaller as they get closer to the top of the frame. Our brains interpret this to mean that the smaller objects are farther away, and we get a feeling of depth from a two-dimensional photograph.

The air above the fog was actually quite clear, but because the background was so far away there’s enough haze to make the distant peaks look more faded than the nearby ridges. The foreground ridges contain the deepest blacks, while the background mountains became pastel shades of blue and gold. Atmospheric effects like this have been used by painters for ages to suggest depth and distance.

So there’s some sense of depth in this image, along with a strong pattern that the long lens helped emphasize: the repeating horizontal lines of the layered ridges.

Wide-open places like prairies, lakeshores, or seashores can also yield distant views, allowing you to show atmospheric effects and near-far juxtapositions with long lenses. Here’s an example, made with a 70mm lens, from the northern California coast: 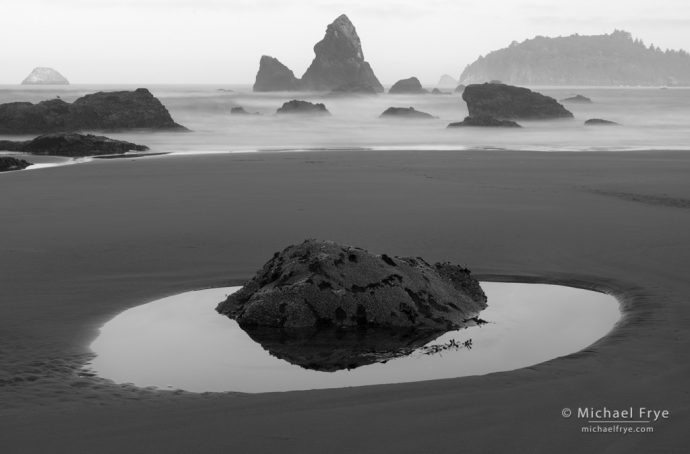 And when fog makes the air thicker, you don’t need a distant view to get strong atmospheric effects (150mm): 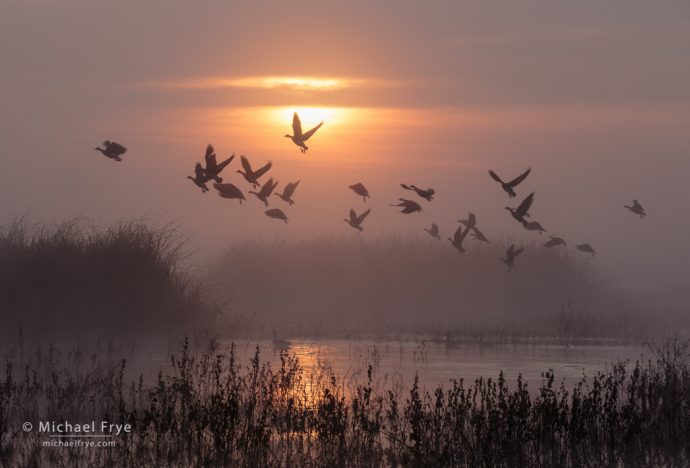 Perspective lines – lines that seem to converge on a “vanishing point” in the distance – are a great way to convey depth and distance. Wide-angle lenses tend to amplify this perspective, but it’s certainly possible to use perspective lines with telephoto lenses. The focal length here was 145mm: 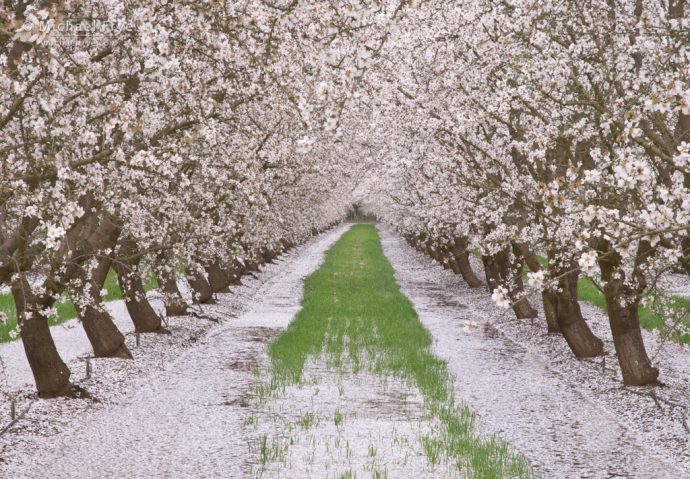 People often use leading lines and s-curves to connect a foreground and background with wide-angle compositions. The same idea works with telephoto lenses too. There’s an obvious reverse s-curve in the following image from Yosemite Valley, which helps lead your eye through the frame, and suggests depth and distance (78mm): 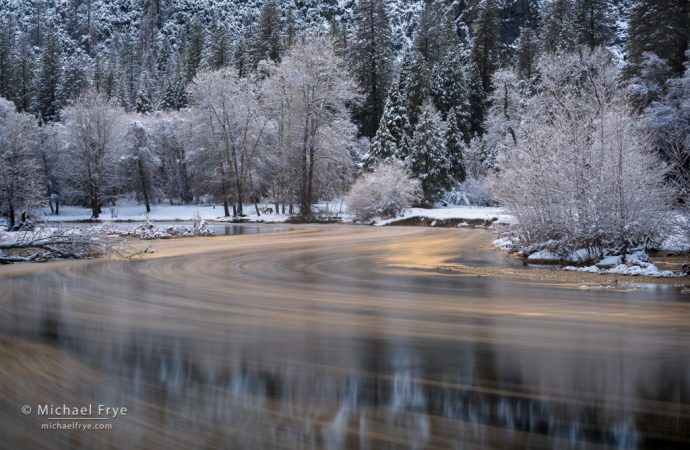 Light – especially sidelight – can also help give a three-dimensional look to a photograph. I don’t think this next image has a strong sense of near-far depth, but the sidelight brings out the textures and rounded forms of the landscape, giving the photograph a 3-D feeling like a relief map (111mm): 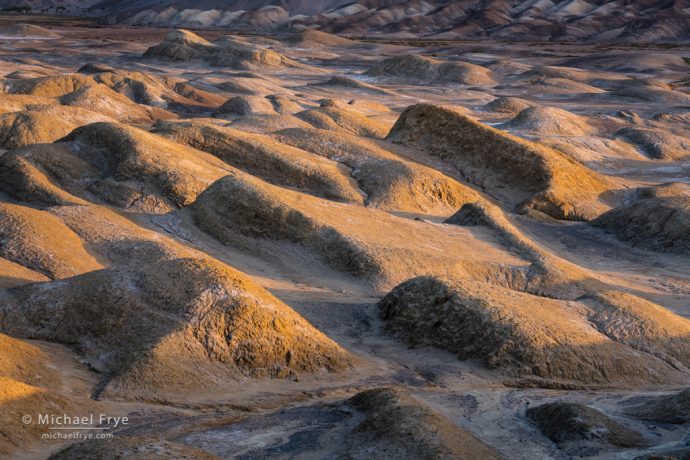 There’s not much feeling of near-and-far depth in this next photograph of aspens either; it’s more about an overall pattern of lines. But the soft sidelight emphasizes the smooth, rounded forms of the trunks, making the image more three-dimensional and, I think, stronger than if the trunks looked flat and pasted onto the background (70mm): 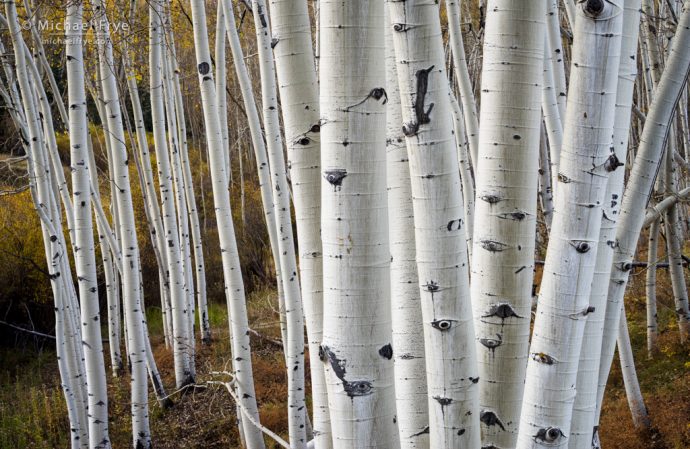 And somehow a light-against-dark, chiaroscuro effect seems to add a sense of depth and dimension to a photograph even without sidelight, texture, three-dimensional forms, or any near-far juxtaposition (81mm): 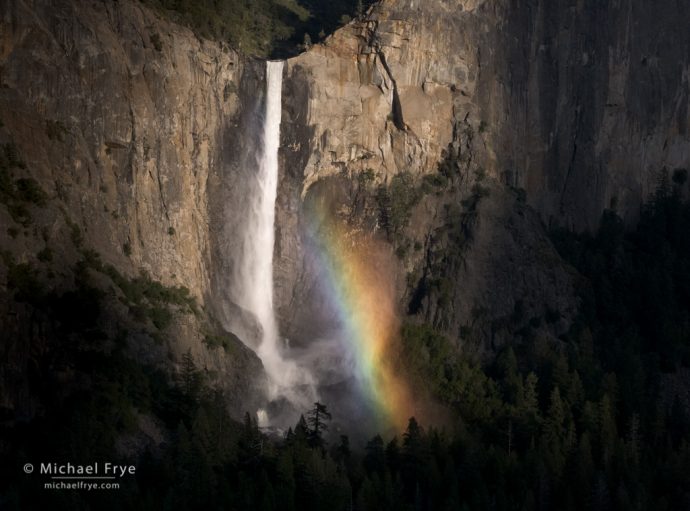 It will always be challenging to make photographs with a sense of depth using telephoto lenses, but when you can pull it off the resulting images can be powerful, because they create a look and feeling we don’t often see in landscape photographs. This next image has atmosphere in the form of fog, and tree trunks that diminish in size in the distance, both of which help give it a feeling of depth. But it also has the kind of strong patterns that telephotos lenses can emphasize (118mm). That, to me, is the best of both worlds: 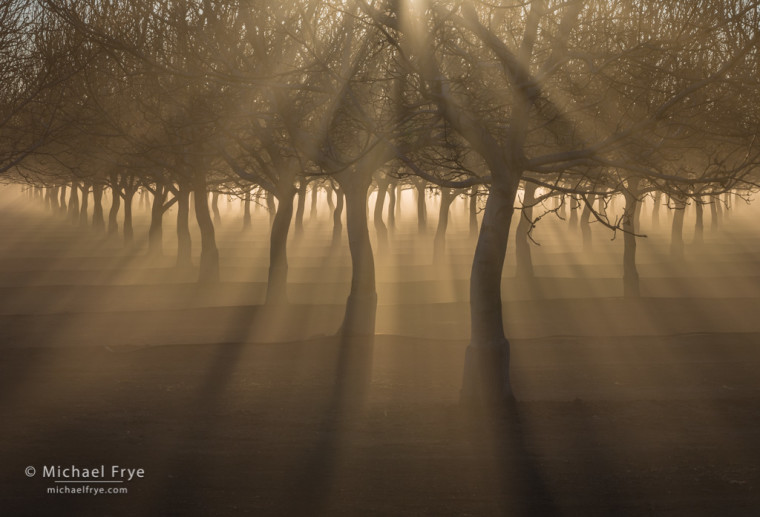 Sunbeams and fog in a Sacramento Valley orchard, California (118mm)

Related Posts: Creating Depth: Beyond the Wide-Angle Formula; The Third Dimension in Photography