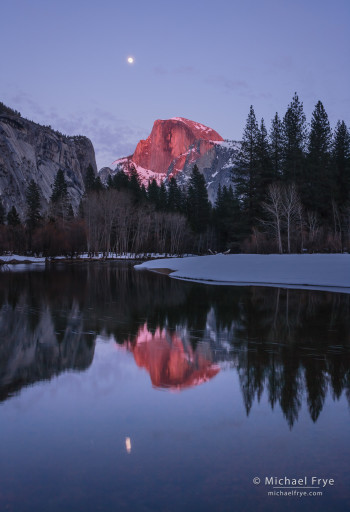 There’s something magical about the moon. Putting the moon in a photograph adds a sense of mystery and timelessness, and can elevate an otherwise ordinary scene into something special. Ansel Adams confessed to being “moonstruck,” and I suppose I am too.

The moon will be full next Tuesday (at 1:28 a.m. here on the west coast), and I’m sure many photographers will be trying to capture a rising or setting moon during the coming days, so I thought I would share some ideas about photographing the full moon, and clear up some misconceptions.

Another misconception is that moonrise or moonset photos are made on the date when your calendar says “full moon.” This can work if the terrain is flat, or you’re at a high vantage point. But if there are mountains or ridges blocking your view of the horizon, you’re better off photographing a moonrise one to three days before the full moon, and a moonset one to three days after the full moon. While the moon won’t technically be full, it will look full enough, and be in a better position than on the actual full moon night. Here’s why:

A full moon is frontlit. During it’s 28-day orbit around the earth, the moon has swung around to the side opposite the sun, so as we view the moon, the light from the sun is behind us, illuminating all of the moon’s surface.

So by definition a full moon is on the exact opposite side of the earth from the sun. That means that, from our perspective on earth, the full moon rises when the sun sets, and sets when the sun rises. But one day before it’s full, the moon rises, on average, 50 minutes earlier, or 50 minutes before sunset. Two days before it’s full, the moon rises approximately 1 hour and 40 minutes before sunset. So on the days before it becomes full, the moon has a chance to rise above mountains and ridges to the east before the sun sets to the west, and you can find balanced lighting between the moon and the landscape. On the full moon date the moon usually rises too late, so by the time it’s visible the landscape below is too dark, and it’s difficult or impossible to get a good exposure for both.

Now I said that the moon rises and sets approximately 50 minutes later each day, but that interval varies greatly depending on the time of year and the stage of the moon’s orbit. The interval can be as short as 30 minutes or as long as 1 hour and 10 minutes. 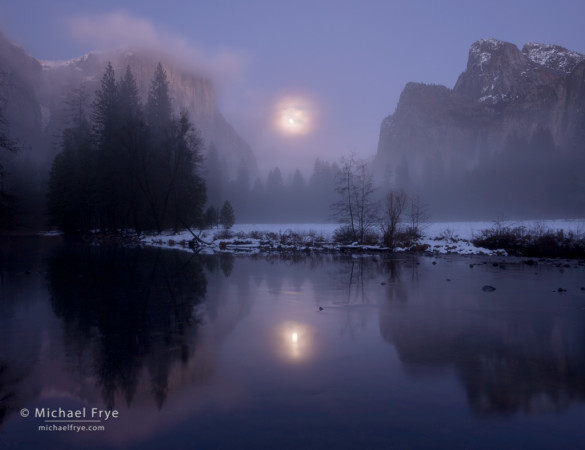 All of these astronomical gyrations can get quite complex, but luckily there are some tools to help you figure all this stuff out. A new one is an app called PhotoPills. It’s excellent, but only available for the iPhone (so far). The Photographer’s Ephemeris has been the gold standard for this type of program for years. TPE is free for the desktop, and $8.99 for iOS or Android. Both PhotoPills and The Photographer’s Ephemeris are great tools for figuring out not only when and where the moon will rise, but whether it might be high enough to clear a ridge or mountain before sunset. There are excellent tutorials on both the PhotoPills and TPE websites, and if you want to capture a moonrise or moonset it’s worth learning how to use one of these programs.

Since the moon will be full during the wee hours on this coming Tuesday, the actual full moon night is Monday night, not Tuesday. So that should mean that the best evenings for photographing the rising moon in Yosemite Valley would be Saturday and Sunday. Looking at TPE confirms this. On Saturday evening the moon should rise to the left of Half Dome from locations in the eastern end of Yosemite Valley, like Cook’s Meadow, or near Sentinel Bridge. Sunday could be a good night to photograph the rising moon from Valley View or Tunnel View.

I hope this little astronomy lesson helps you understand the moon’s movements. Once you wrap your head around some of these concepts it’s not that difficult to predict when and where the moon will rise so you can put yourself in the right position to capture a moonrise or moonset. Good luck! 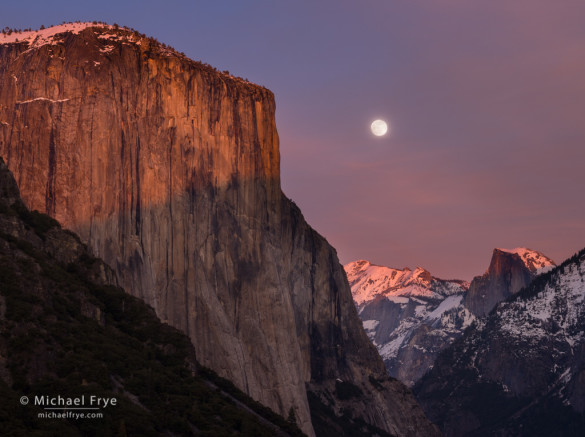 Moon rising between El Capitan and Half Dome from Tunnel View, January 18th, 2011 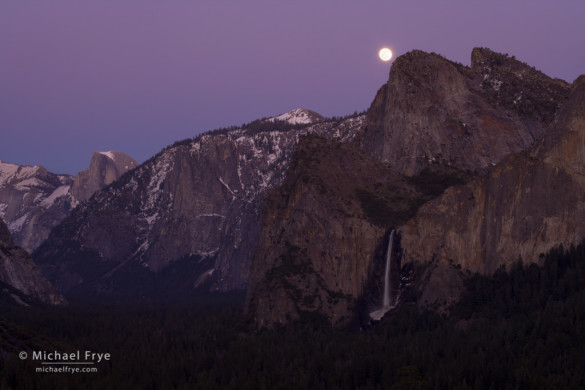 Moon rising over Cathedral Rocks from Tunnel View, February 24th, 2013. On this February evening the moon had already swung more to the right (south), away from Half Dome. As winter moves into spring and summer, the full moon rises further and further to the right. 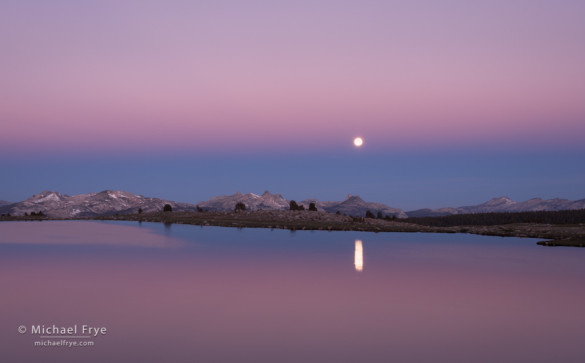