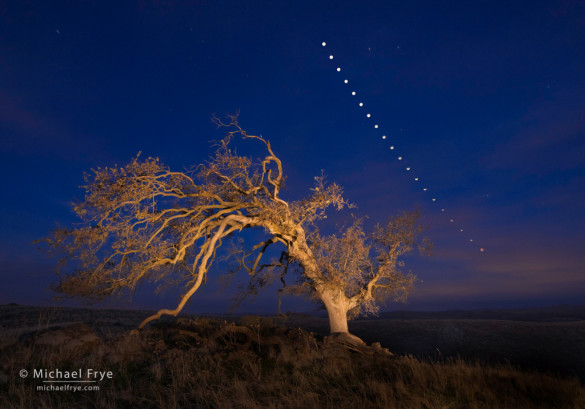 One of my most popular posts this year was a recent one, called Moonstruck. This article focused on how to capture moonrise and moonset photographs, with a discussion about how to predict the moon’s movements, and apps that can help with figuring out the precise position of the sun and moon.

While the Moonstruck article focused on photographing moonrises and moonsets, I’ve also written about photographing by moonlight. Tips for Photographing Lunar Rainbows delves into the specifics of moonlight photography: camera settings, shutter speeds, and how to focus in the dark. And in another post from 2012 I described the experience of photographing lunar rainbows in Yosemite, first with the crowds of photographers in Cook’s Meadow, then along the Upper Yosemite Falls Trail. And then late last year I wrote about my most memorable New Year’s Eve, and how that inspired me to make a photograph of the Three Brothers by moonlight.

And while we’re talking about the moon, one of the most spectacular celestial events is a lunar eclipse. In 2014 there will be two total lunar eclipses: one on April 15th that will be visible throughout most of North America, and another on October 8th, visible from Europe and Africa. If you’d like to photograph either of these events you might want to look at this post with tips for photographing a lunar eclipse, or this one where I describe making the photograph above in the Sierra foothills.