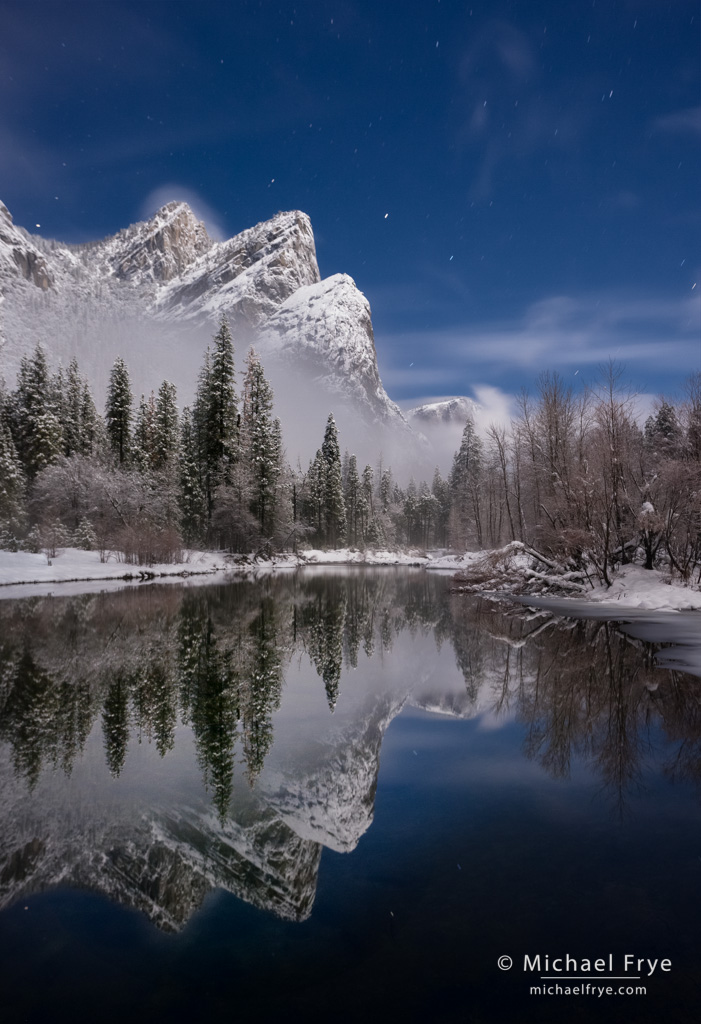 It was 1985 — I think. My fiancé Claudia and I had started working at The Ansel Adams Gallery in Yosemite Valley in September. On New Year’s Eve it snowed, but after dark the storm broke, and a full moon appeared through rifts in the clouds.

Someone suggested going cross-country skiing in the moonlight. With a few co-workers from the gallery and other valley friends we gathered our ski equipment and headed out to the Ahwahnee Meadow. There were nine of us altogether (I only know that because a snapshot of the group has survived). Most of the group weren’t experienced skiers, and I remember a lot of flailing and falling while we were trying to cross a ditch in the meadow.

Then someone had the brilliant idea of skiing to Mirror Lake, about two miles away. In our youthful exuberance and folly we all thought this sounded great. We skied out past the Ahwahnee Hotel and along the old roads that lead to the lake. At one point Claudia, myself, and a few others got behind the rest of the group, only to be ambushed by snowballs as we entered a stand of trees.

We eventually made it to Mirror Lake around midnight. None of us thought to bring any champagne, but it didn’t matter — we were quite happy anyway, and thought it was a fitting way to greet the new year.

One of my memories from that night is how indescribably beautiful it was to watch a snowstorm clearing by moonlight. As we skied out to the lake I kept looking up at Glacier Point, Half Dome, and the moon. The clouds and mist glowed, and the snowy cliffs seemed impossibly bright.

For the past several years, spurred by the memory of that New Year’s Eve, I’ve wanted to capture a photograph of a clearing snowstorm by moonlight. It’s not often that a storm clears after dark while the moon is full, but I finally got that opportunity last Wednesday.

A series of storms had left over a foot of fresh snow on the valley floor. Watching radar and satellite images online I realized that the skies would clear in the evening, and the moon was almost full, so I dressed, packed my camera gear and some food, and drove up to Yosemite Valley.

When I left my house in Mariposa the moon was out, so I thought it might be too late by the time I reached the park. But I was just in time. The mist actually lingered and swirled around the valley for hours, and I photographed from Tunnel View, Cook’s Meadow, and along the Merced River near El Capitan. This photograph of Three Brothers is my favorite image from the evening — the one that best captures the feeling of that moonlit, misty night. And it evokes memories of that New Year’s Eve twenty-seven years ago.

The new year has almost arrived, so that means it’s time once again to pick my best images from the past year. Tomorrow I’ll post a selection of my top photographs from 2012, and let you vote for your favorites. This has become an annual tradition on this blog, and is always a popular event, so keep an eye out for that post tomorrow!