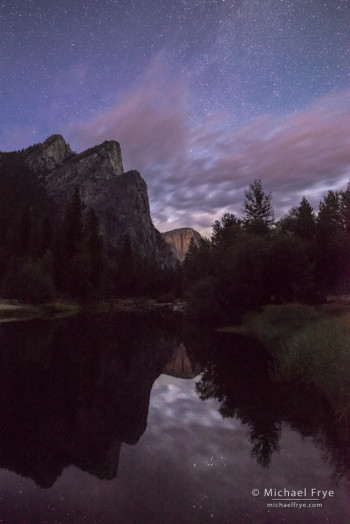 Tuesday evening Claudia and I drove to Yosemite Valley. The moon was due to rise about 90 minutes after sunset, so I hoped to photograph the northern end of the Milky Way over Three Brothers, with the rising moon adding a bit of light to the peaks.

We got to the Valley well before sunset, but there were some interesting clouds, so we decided to head to Tunnel View, where we found the usual August assortment of tour buses and people taking selfies in front of the panorama. I photographed some interesting patterns of dappled sunlight and clouds, then, just at sunset, after the crowds had thinned, the sky turned pink and a beautiful array of tufted clouds drifted overhead (below).

We had a little picnic along the Merced River as we waited for the sky to get dark, then I started taking photos of Three Brothers. At first the clouds blocked most of the stars. But the sky gradually cleared, revealing more stars, and then, looking at the photos on my camera’s LCD screen, I could see the clouds taking on a pink hue, and a hint of light on Yosemite Point in the distance. This was the lunar equivalent of a predawn glow, with the moon still below the horizon, but already adding some light and color to the scene. My eyes couldn’t see the color, but the camera could (right).

Later, as the moon rose for real, the clouds and peaks turned gold, just as they would at sunrise. Again, it was too dark for the cones in my retinas to pick up the color, but the camera recorded it perfectly. And some of the cloud formations were spectacular, fanning out in big V shapes above Three Brothers (below).

Normally you want clear skies for star photographs. But moonlight can make nighttime clouds spectacular. And low-angle moonlight is like low-angle sunlight, creating gold, orange, and pink hues just like you see at sunrise and sunset. (I used this same idea – low-angle moonlight – to photograph Horsetail Fall a few years ago.) While the quantity of light from the moon is low, the quality of light is essentially the same as sunlight. With enough exposure, a moonlit scene can look just like a daytime scene – only with stars in the sky. 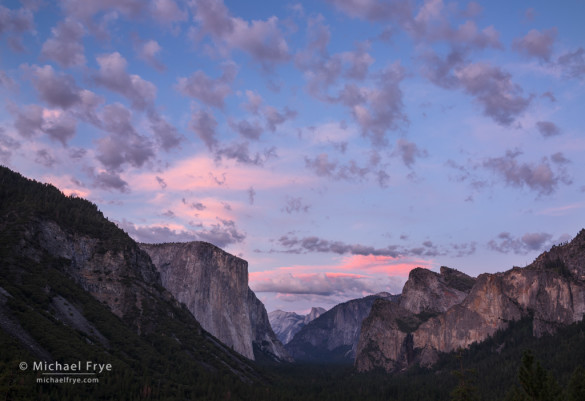 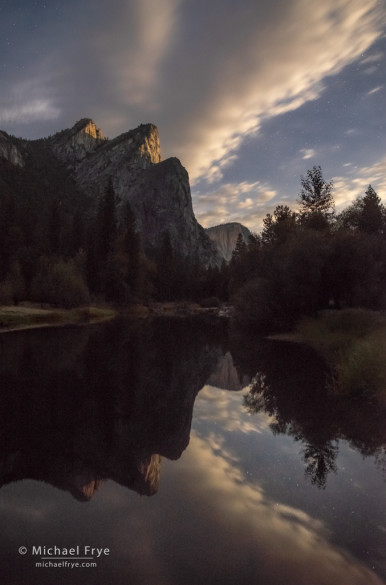