Moon Above Half Dome 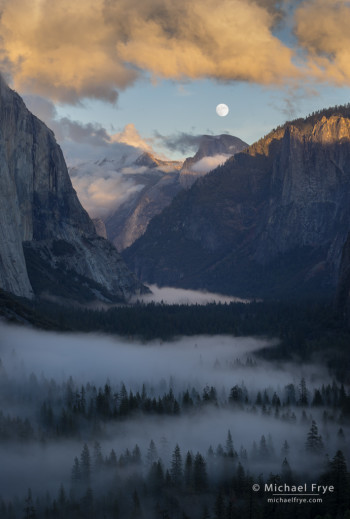 Last Thursday evening the moon was due to rise in an interesting spot. I checked PhotoPills and The Photographer’s Ephemeris, and it looked like you’d see the nearly-full moon rise right over Half Dome if you were standing at Tunnel View. But I wasn’t sure the moon would be visible, as there were a lot of clouds.

On Tuesday and Wednesday most of California had received a good soaking – the biggest storm the state has seen in two years. Yosemite Valley got about 1.4 inches of rain, and a foot or two of snow above 8,000 feet; a decent amount, and enough to get the waterfalls flowing again, but some areas to the north and south got much more precipitation. The drought is far from over, as we need many more storms like this just to reach average rainfall levels for the winter. But it was a good start.

The storm started to clear early Thursday morning, so I drove up to Tunnel View for sunrise. It was too cloudy at first, but then the sun broke through and hit El Cap, and some beautiful sunbeams appeared to the right of Cathedral Rocks (see the image below).

Since I had some business in the valley that afternoon, I hung around, napping in my car and working on my laptop. During my meeting later I kept checking the satellite images and webcams on my iPhone, but it looked like there were a lot of clouds. We took a break at 3:45 p.m., so I stepped outside, and the weather actually looked more promising. The clouds were broken, with shafts of light reaching the cliffs. Even if the moon didn’t appear, it could be an interesting sunset. Gotta go!

There were, not surprisingly, quite a few photographers at Tunnel View. Everyone was anxiously awaiting the moon, but there were a lot of clouds around Half Dome. Gradually, however, the clouds started to dissipate. Then the edge of the moon appeared right above Half Dome. It was pretty quiet for the next ten minutes, except for the sound of shutters clicking. The moon was in a great position, and the clouds and misty valley floor added an extra dimension to the scene.

After sunset I returned to the meeting. But on my way home later I found some beautiful, moonlit, clearing-storm scenes at Gates of the Valley and Tunnel View (see below). The moon was high overhead, so these scenes didn’t have the color I found in El Cap Meadow the other night, but I liked the silvery light in these images.

This was another really beautiful day (and night) in Yosemite. I know there were a lot of other photographers in the valley on Thursday, and I always like to see what other people are up to, so if you photographed that moonrise, or would like to share other photos of Yosemite from last week, please post a link to your images in the comments!

P.S. For more information about photographing moonrises and moonsets, see this post. 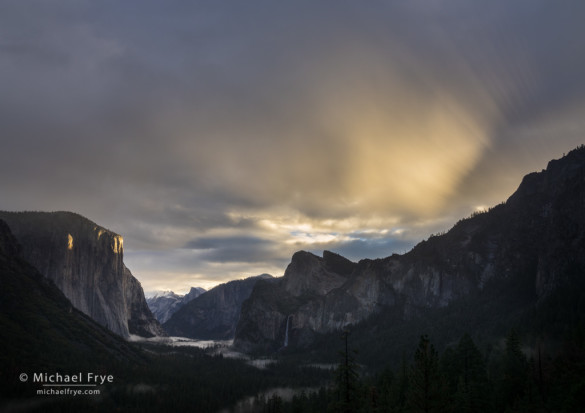 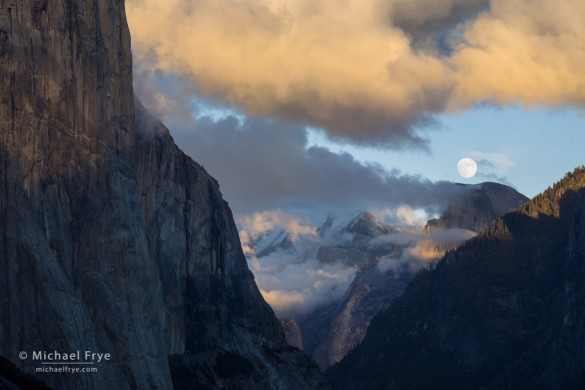 Moon rising above Half Dome, Thursday evening (this image was made a few minutes earlier than the one at the top of the post) 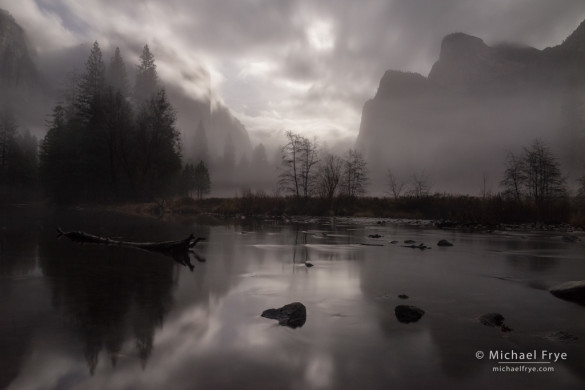 Clearing storm by moonlight, Gates of the Valley, about 6:30 p.m. Thursday 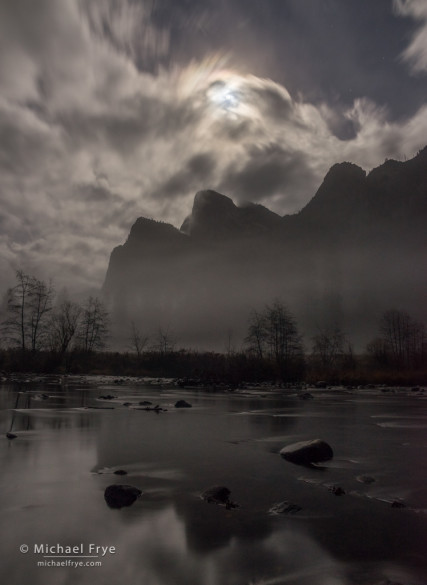 Moon, clouds, and Cathedral Rocks reflected in the Merced River, about 6:40 p.m. Thursday 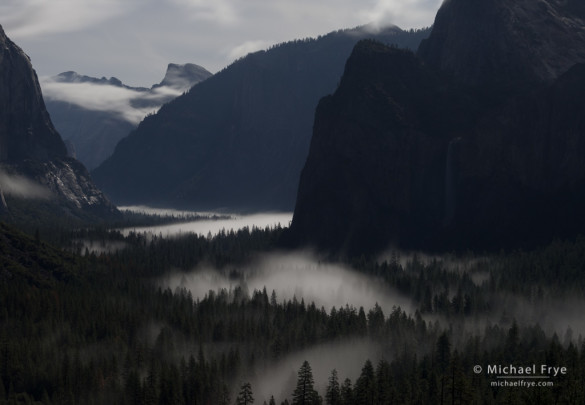