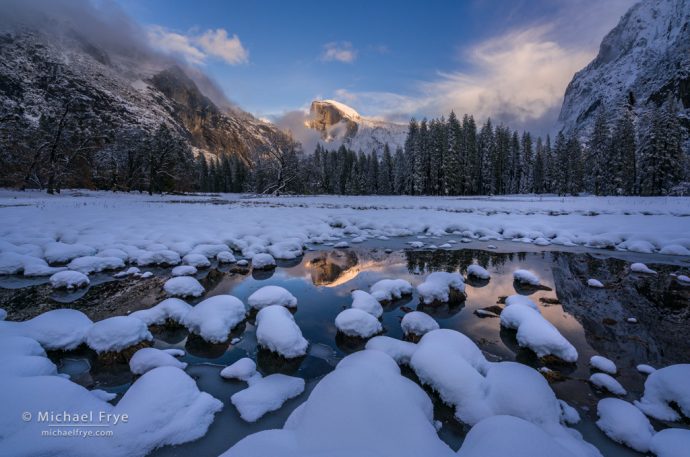 Late-afternoon light on Half Dome from Cook’s Meadow, Yosemite

I haven’t had a chance to post here recently, but I wanted to write about the big snow in Yosemite nine days ago. California was hit by three storms in a row, and the last two brought snow to Yosemite Valley – a lot of snow. The final storm in the sequence moved through slowly on Sunday and Sunday night (January 22nd), but by early Monday morning it showed signs of clearing, so Claudia and I woke early and drove up to the valley. We found about 18 inches of snow in open areas, more than we’d seen in years.

Because of all the snow, and tree limbs falling on the roads under the weight of that snow, the park service closed highways 120 and 41, so the only access to the valley was via Highway 140. About 10 a.m. they even closed 140 to inbound traffic, so there was no access to Yosemite Valley at all for a few hours. But as the snowfall diminished the limbs stopped falling, the snowplows were able to catch up a bit, and they reopened 140 to incoming traffic early in the afternoon.

It kept snowing off and on for awhile after we arrived that morning, so at first I concentrated on photographing snowy trees. The deep snow made breaking trail on foot difficult. I even got out my snowshoes at one point, and was glad I had them.

The water levels were still high (for January), and the meadows all partially submerged. That meant there were innumerable small ponds in the meadows, any of which could provide an interesting and unusual photo opportunity, especially in the snow. In the afternoon, as Half Dome emerged from the clouds, I headed to Cook’s Meadow, joining a dozen other photographers who were also drawn to this spot. There were some great foregrounds there, with snow-covered mounds poking out of a shallow pond. I spent most of the afternoon exploring that area, finding different angles and arrangements of snow mounds.

I was first drawn to the foreground in the photograph below, with its nice pattern of snow mounds. I especially liked the one prominent mound just right of center, about a quarter of the way up from the bottom of the frame, which created a foreground focal point to juxtapose with Half Dome. 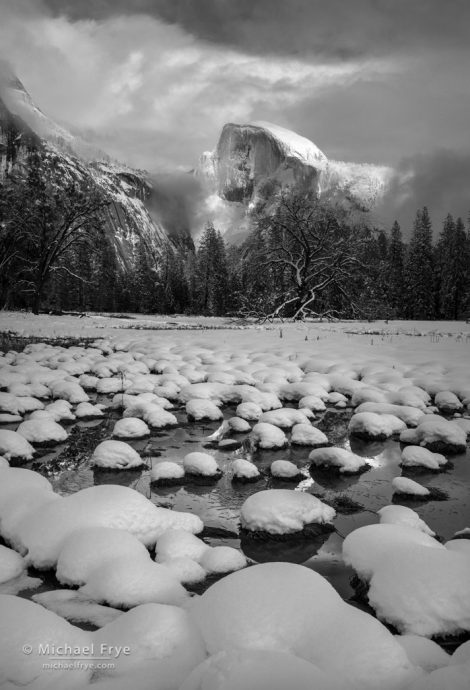 Later, about 45 minutes before sunset, I moved to the right and found the foreground shown in the photograph at the top of this post. The snow-mound pattern there wasn’t as strong as the other spot, but it had a nice reflection of Half Dome. This foreground was better suited to a really wide (16mm) view in a horizontal orientation, and luckily, shortly after I found this spot, some clouds formed to the right and left of Half Dome, filling in what otherwise would have been empty, uninteresting parts of the photograph.

In addition to the patterns they created, what I especially liked about these snow mounds was how their rounded shapes echoed the rounded shape of Half Dome. Any time you add a foreground to a photograph it helps immensely if there’s something to tie the foreground and background together – similar lines, shapes, colors, or a line that draws the eye from foreground to background.

In both cases I positioned the camera carefully. In the photograph at the top of this post I payed close attention to the reflection of Half Dome, fitting it into a gap between the snow mounds. In the black-and-white, vertical image above, I didn’t want to put that prominent snow mound directly in the center of the frame, and line it up right underneath Half Dome, because I thought that would be too static. So I moved it just to the right of center, setting up a slight dynamic tension between the two focal points.

The camera height was also critical in both of these compositions. In situation like this, getting the camera low makes the foreground objects larger and more prominent, which is usually a good thing. On the other hand, putting the camera too low foreshortens the foreground, and hides the middle ground. A too-low camera position also creates visual mergers between foreground objects, rather than keeping them separate and distinct.

So in both of these compositions I put the camera a little below eye level – about neck level in the first image, and about chest level in the second. In each case, putting the camera lower would have created unwanted visual mergers in the foreground. For example, in the second image, lowering the camera would have merged that prominent snow mound (the one just right of center, about a quarter of the way up from the bottom) with other mounds below and above. If you look to the left and right of that mound you can see other places where mergers would have occurred if the camera were lowered. In fact the whole foreground pattern would have disappeared if the camera had been positioned too low.

At times that afternoon the light and clouds around Sentinel Rock were pretty striking, so I moved around to the other side of the pond to get a better view. While I liked the foregrounds in those two previous images of Half Dome, I was less successful finding a foreground for Sentinel Rock. I actually like the foreground overall in the photograph below, but that foreground is full of rounded shapes, while top part of the image is dominated by diagonals and the pointy shape of Sentinel Rock, so the composition isn’t as harmonious as the two previous ones. 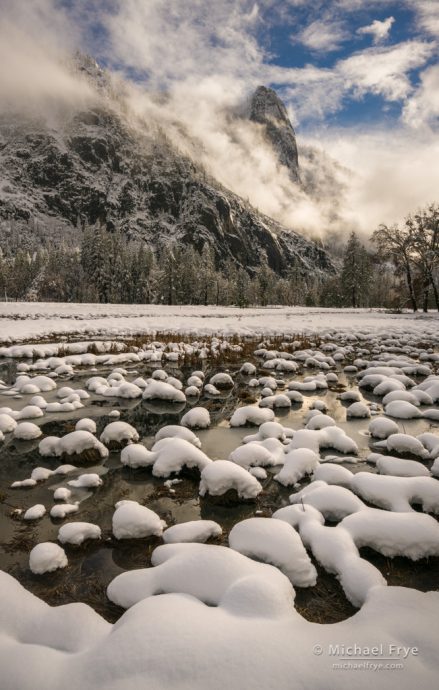 Despite the difficulty walking around that day, and our wariness of falling limbs, Claudia and I had a great time photographing in the snow, me with my big camera (if you can call the Sony big), her with her iPhone. It was a beautiful day, and great to see all that snow. Maybe I’ll share some snowy tree photos from that day in another post.

Related Posts: A Wild Week in Yosemite; When Should You Include a Foreground in a Landscape Photograph?; Creating Depth: Beyond the Wide-Angle Formula