When Should You Include a Foreground in a Landscape Photograph?

On the other hand, many classic landscape images do have foregrounds – prominent ones – like another Ansel Adams photograph, Mount Williamson from Manzanar, or many images by landscape master David Muench.

So how do you know when to include a foreground in your own landscapes? Ask yourself these questions:

Is the foreground compelling?

This might seem like an obvious question, but some photographers think that a foreground is an absolute requirement, and include one whether it’s interesting or not. A boring foreground just takes up valuable image space and distracts from other, more interesting parts of the photograph.

On the other hand, finding a truly eye-catching foreground can add greatly to a scene, especially if the background is not that compelling. While I liked the shapes of the dunes in New Mexico’s White Sands National Monument, I thought this lone yucca was even more interesting. This image is all about the foreground, while the background takes a secondary role: 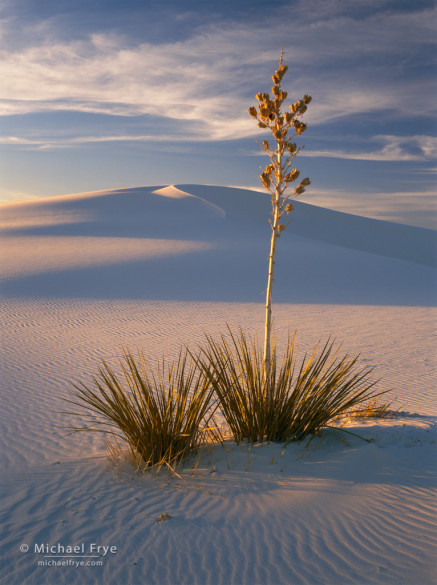 How interesting is the background?

Is the background compelling enough to stand on its own? If so, you probably don’t need a foreground, and including one will just draw attention away from that interesting background.

This scene at California’s Mono Lake, with a rainbow and spectacular storm clouds, doesn’t need a foreground. Bushes or trees at the bottom of of the frame would only be a distraction. I didn’t think for a second about trying to find a foreground here, and used a telephoto lens to fill the frame with all that drama on the other side of the lake: 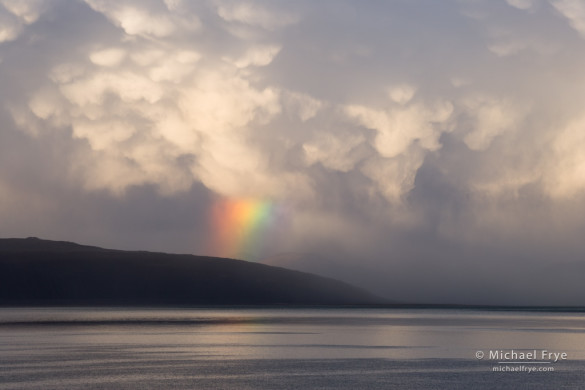 Does the foreground complement the background?

You can have a great foreground, and a wonderful background, but if the two don’t mesh the final photograph will look like two different images stuck together. For the foreground and background to complement each other they have to have similar lines, shapes, or colors, or the foreground has to lead the viewer’s eye to the background.

This photograph from Yosemite has beautiful swirling ice patterns in the foreground, and mist-shrouded El Capitan in the background. But it doesn’t work—the two halves of the image don’t fit together because the lines in the bottom are mostly horizontal, while the lines in the top are mostly vertical. It looks disjointed: 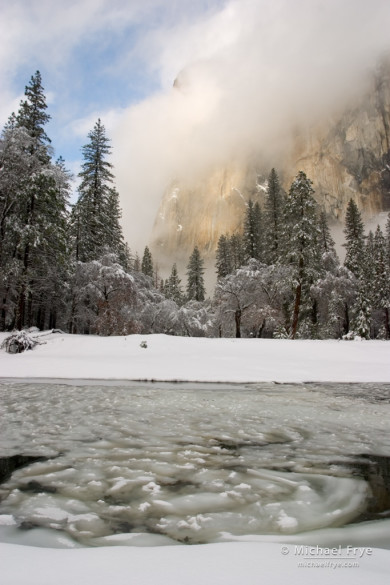 In this next photograph of Three Brothers, made only about 100 feet from the previous example, the foreground and background complement each other because they have similar shapes. The triangular shapes of the snow mounds echo the triangular shapes of the peaks, and those foreground triangles actually form arrows that point to the background, leading the viewer’s eye into the frame: 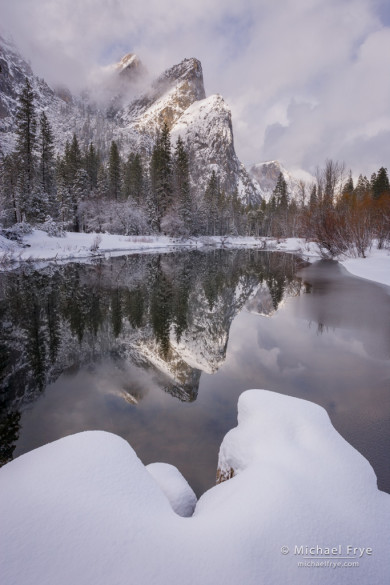 Related Posts: Creating Depth: Beyond the Wide-Angle Formula; Where Should You Place the Horizon in Landscape Photographs?