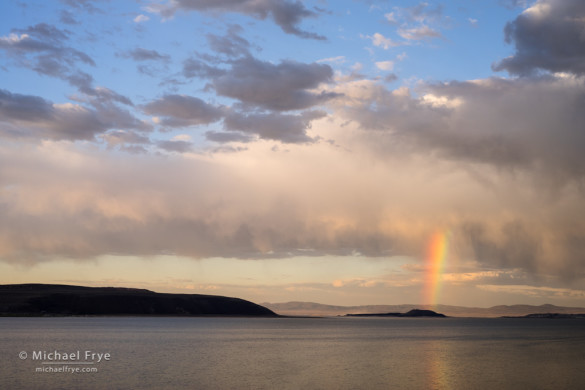 Rainbow over Negit Island, Mono Lake, California. Although I made other compositions of this scene with longer lenses, I liked the slightly wider perspective created by a normal 50mm lens, because it allowed me to include some of the blue sky.

The “normal” lens doesn’t get much love. Longer and shorter focal lengths seem more attractive, because they create unusual perspectives. As I wrote in this recent post, wide-angle lenses stretch space and make things look farther apart, sometimes creating a sense of depth, while telephoto lenses compress space and makes objects look closer together, helping to emphasize patterns and juxtapositions.

I, too, was guilty of disdain for the normal lens for many years. Although I used normal lenses (around 50mm for full-frame cameras, or about 35mm for APS-size sensors) for two decades with my film cameras, for a ten-year stretch the only lenses I used with my Canon DSLRs were 17-40mm and 70-200mm zooms. I never felt the need to fill the gap between 40mm and 70mm because I usually wanted to go either wide or long. On the rare occasions when I needed a focal length between 40mm and 70mm, I used 40mm and cropped.

When I bought my Sony A7r last year, I also got a Novoflex adapter so I could test some old Nikon lenses I had lying around. One of those lenses was a 50mm f/1.8 that I bought in the early ’90s. I think it was Nikon’s cheapest lens back then; it probably cost around $60. When I tested it on the A7r, this lens turned out to be extremely sharp – not wide open (no surprise for an inexpensive lens of that era), but from f/5.6 to f/16 it was tacky sharp from corner to corner. It’s probably the sharpest lens I own.

So for the price of the adapter I now have a very sharp lens for those occasions when 40mm is too short, and 70mm too long. And I’ve been surprised at how often I use this lens. It fills a gap, of course, but also serves as both a short telephoto and long wide angle. It can sometimes be used to create a sense of depth, but with tighter framing than a wide-angle lens, and without making background objects look too small. It also works for creating patterns in situations where I just can’t fit in everything at 70mm.

So I’ve developed a new appreciation for the lowly, under-appreciated normal lens. Some of my favorite images over the last year were made with that Nikon 50mm lens, and I couldn’t live without it now. I’ve included a small gallery of normal-lens images here, with extended captions to talk about the use of perspective. 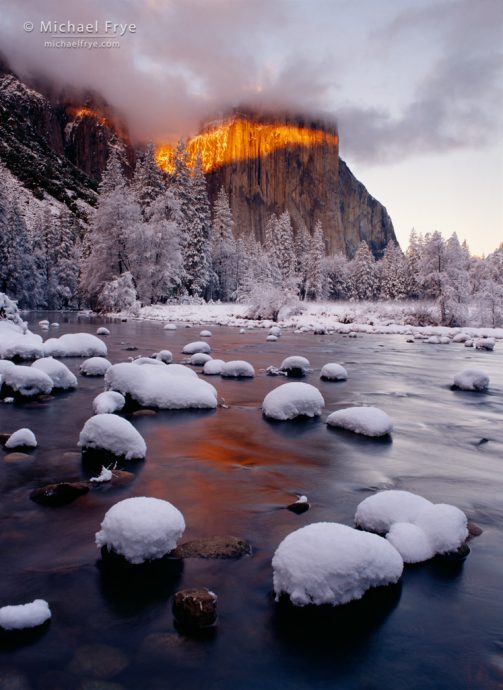 This might be my best-known photograph, and it was made with a normal lens on a Mamiya 645 camera.

I first tried my 45mm lens (equivalent to about 28mm on a full-frame sensor), but quickly realized it was too wide, because it made El Capitan look small and insignificant (imagine El Cap looking half the size it does here: half the height, half the width). On the other hand, I wanted to include the snow-covered rocks in the foreground, which wouldn’t be possible with a telephoto lens. So I switched to the normal lens for that format (80mm), and stepped back to include the snow-covered rocks. The longer lens made El Cap look larger and more prominent, which was essential for showcasing that dramatic light.

Using that 80mm focal length required stopping down to f/22 and focusing carefully to get both foreground and background in focus. But although it would have been easier to keep everything sharp with the wide-angle lens, I’m glad I switched to the longer focal length. In this case the normal lens served as a long wide-angle, allowing me to create a near-far perspective while keeping the background prominent. 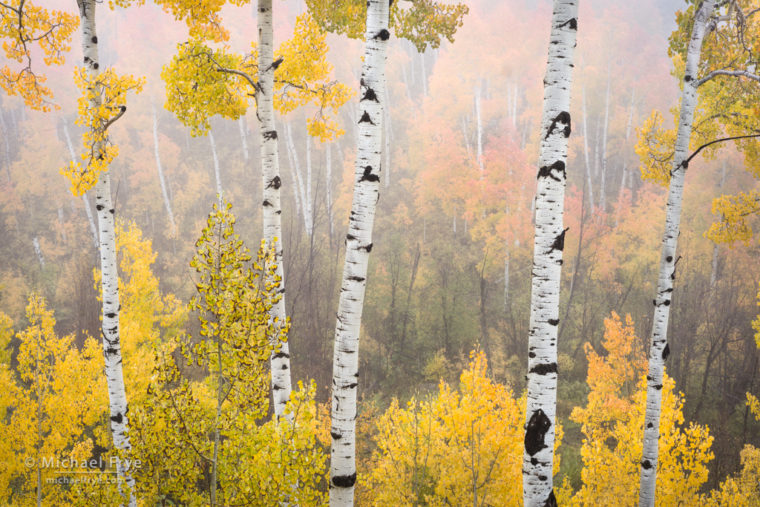 This is one of my favorite photographs from last year, made on a beautifully foggy morning in Colorado.

Claudia and I were driving along a dirt road when I spotted this juxtaposition of foreground aspens against a more distant aspen-covered hillside. A wide-angle lens would have been too wide here, forcing me to include either the bright, distracting sky that’s just out of the frame at the top, or roadside weeds at the bottom. A telephoto lens would have been too long; I wouldn’t have been able to fit all five foreground trunks in the photograph, or the leaves along the top and bottom that frame the view of the background hillside.

I think of this as a short telephoto perspective. The normal lens (that Nikon 50mm on the A7r) created just enough spacial compression to form a visual juxtaposition and comparison between the foreground and background trees, emphasizing the v-shaped patterns of the trunks both near and far.

Depth of field was an issue in this photograph as well. At f/16 I couldn’t quite get both the foreground and background trees critically sharp, no matter where I focused. I didn’t want to use f/22, as that small aperture would have created diffraction and softened the image. So I used focus-stacking, making three different exposures focused at three different distances (foreground, background, and in between), all at f/16, and then blended those three exposures together with Helicon Focus. 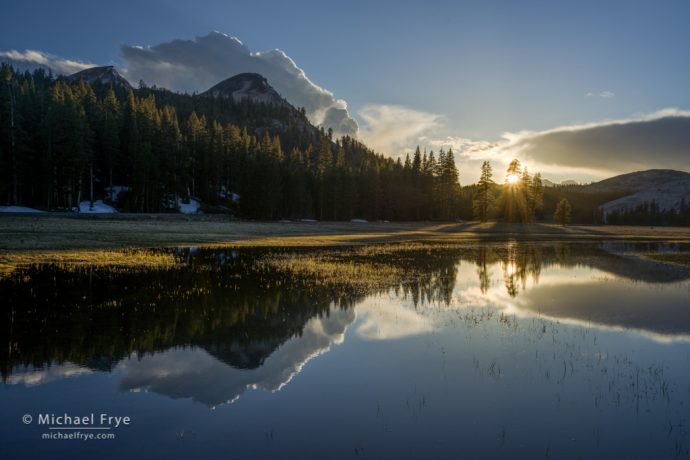 I think of this as a long wide-angle perspective. If I didn’t know better, I would have guessed that this photograph was made with a moderately short focal length, like 35mm. The mirror reflections of mountains and clouds give it a wide-angle feeling, and if you click on the image to see it larger you’ll notice grasses poking out of the water in the foreground, adding a hint of near-far perspective.

But this image was made with that Nikon 50mm lens on my Sony A7r. Again, a wider lens would have been too wide here, making the sun, trees, and mountains too small, and forcing me to include more blank, blue, uninteresting sky and reflections above and below. 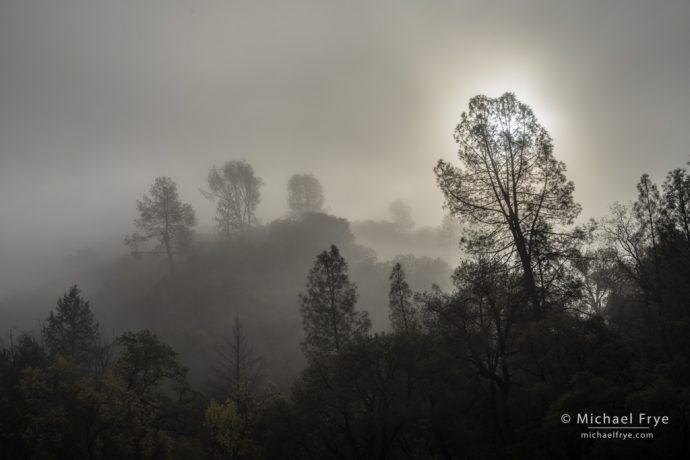 Here, if I didn’t know what focal length was used, I’d have guessed 90 or 100mm – short telephoto territory. It looks like the background trees have been “pulled in” by a longer lens, creating a juxtaposition and visual comparison with the foreground trees, as well as a repeating pattern.

But as you’ve probably guessed by now, this image was made with a 50mm lens (the Nikon on the A7r). I needed to include some darker areas above the sun to hold the viewer’s eye in the frame, and a longer lens wouldn’t have allowed me to do that and still keep the darker row of trees along the bottom, as well as the trees near the right and left edges. In this instance the normal lens served as a short telephoto.

While ultra-wide and long telephoto lenses seem sexy, the most attractive lens is the one that works for the situation at hand. Sometimes a normal lens is just right.

What about you – do you ever use those in-between focal lengths, or do you always go wide or long?

Related Posts: Lenses and Perspective: The Long and the Short of It; Creating Depth: Beyond the Wide-Angle Formula