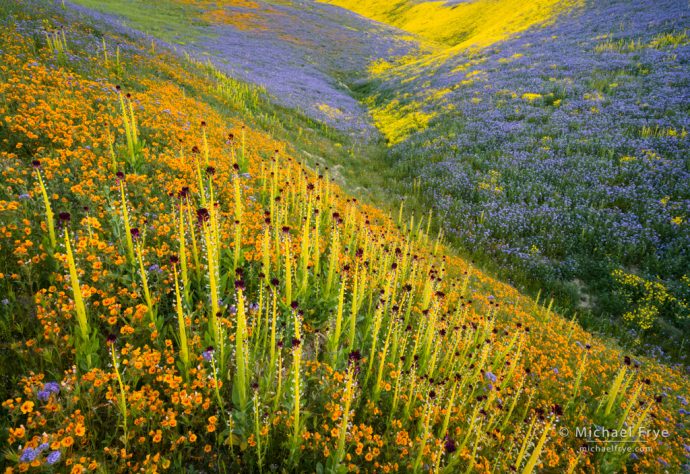 Wildflowers in the Temblor Range, with desert candles, blazing stars, tansy phacelia, and hillside daisies, Carrizo Plain National Monument. I used a wide-angle lens (20mm) to be able to look down into the stand of flowers in the foreground and show more of the orange color (the blazing stars), while also including part of the colorful hillside in the background. 1/6 second at f/16, 800 ISO.

Many years ago – perhaps around 2005 – I saw a striking photograph of flowers in the Temblor Range, bordering the Carrizo Plain. I wanted to go there, and in April of 2006 I did, finding a route up the steep ridges of these mountains to a colorful hillside. The flowers weren’t as abundant that year as they were in the photo I saw, but it was still beautiful, and I was able to make a couple of images I liked.

In 2010, after seeing reports of a great flower bloom in the Carrizo Plain, I returned to the area and hiked up into the Temblors again. It was spectacular – the most amazing flower display I had ever seen. I could only spend one afternoon and one morning there, but it was a wonderful 24 hours. The hills were enveloped in thick fog on my one morning there, and spots of sunlight breaking through the fog created some beautiful light. I could see, however, that the flowers wouldn’t last long, and I wasn’t able to go back that spring, but ever since then I’ve wanted to return.

2011 wasn’t a great flower year in the Carrizo Plain, and then we had five years of drought. Finally, this year, that area received above-average rainfall, and the flowers took off. In my last post I showed some photographs I made of the plain, which was incredibly beautiful. But I was also finally able to return to the Temblors in a good flower year.

In some places, as in 2010, it looked like someone had spilled buckets of yellow, purple, and orange paint over the hills. People often think the orange flowers in these hills are poppies, but they’re actually blazing stars (Mentzelia pectinata). (Well, there are some poppies in the Temblors, but not many, and the blazing stars are much more common.) The splashes of yellow are created by hillside daisies (Monolopia lanceola), and the purple is from tansy phacelia (Phacelia tanacetifolia). And what you can’t see from a distance, but discover once you get up there, is that there are acres and acres of desert candles – one of my favorite flowers.

Claudia, Robert and I had a wonderful time in these hills. The climbs were steep, the footing sometimes difficult, and we were always on the lookout for rattlesnakes, but it was all worth it. Alas, it doesn’t look like we’ll be able to go back this year, but I’m already looking forward to the next good spring. 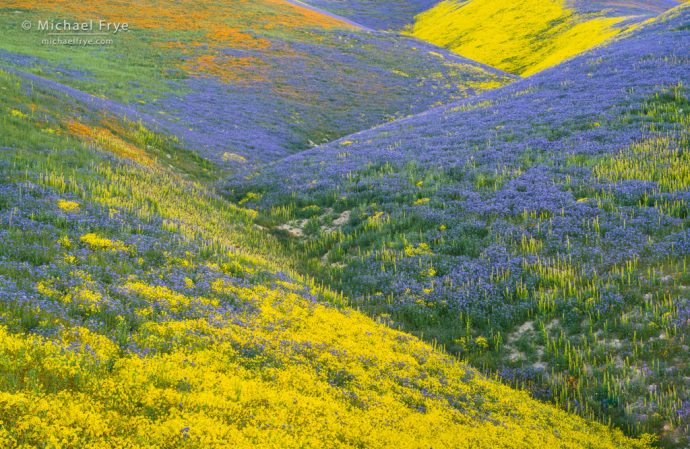 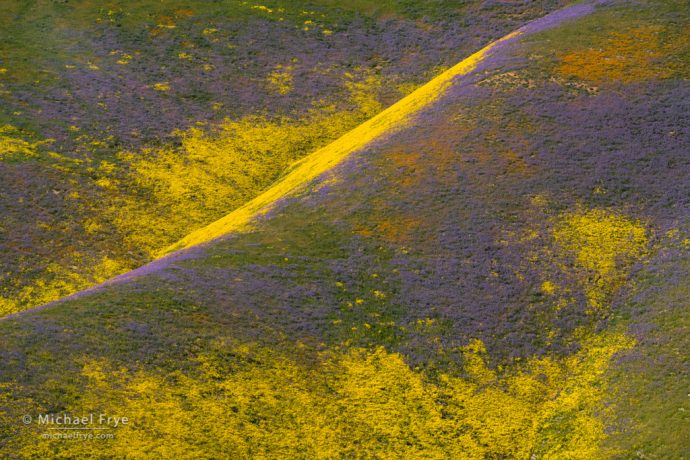 Flower-covered hills, Carrizo Plain National Monument. The same hillside shown in the previous two photos, but taken from across a canyon. 160mm, 1/45 second at f/11, 100 ISO. 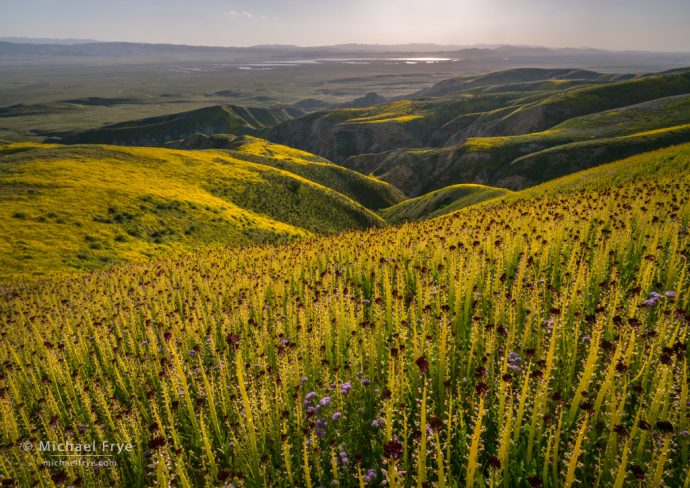 The Carrizo Plain from the Temblor Range, with Soda Lake in the distance and desert candles in the foreground. A wonderful spot, with acres of desert candles. I liked the sun reflecting off of Soda Lake in the distance, and used a very wide lens (16mm) to include the sweep from foreground to background. The sun was just above the frame, so I stuck my hand out to shade the lens and prevent flare. 1/90 second, f/16, 100 ISO. 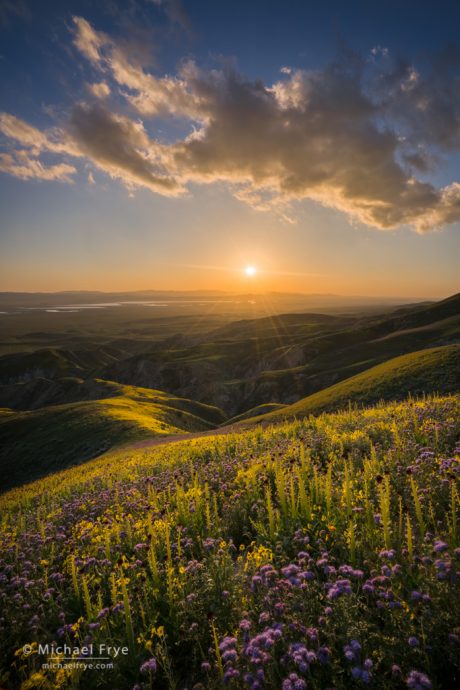 Setting sun from the Temblor Range, with desert candles, tansy phacelia, and hillside daisies in the foreground. We had one afternoon with a few clouds, and one cloud positioned itself nicely for this view. A five-shot bracketed sequence, each frame two stops apart, blended with Lightroom’s HDR Merge. 16mm, various shutter speeds, f/16, 200 ISO. 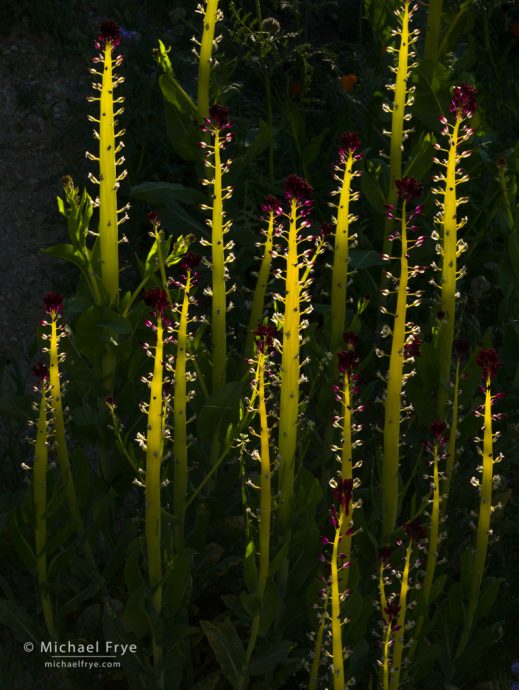 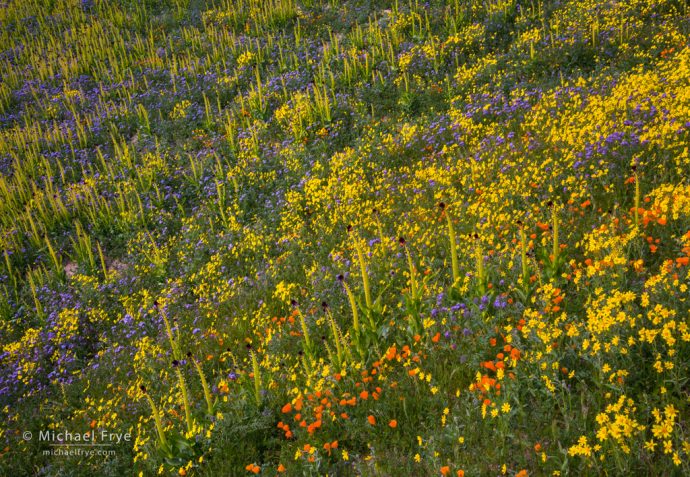 California poppies, desert candles, hillside daisies, and tansy phacelia, Carrizo Plain National Monument. There are a few poppies in the Temblors. Here we found a beautiful mix of flowers, and a passing cloud helped soften the light. 33mm, 1/90 second at f/16, 200 ISO. 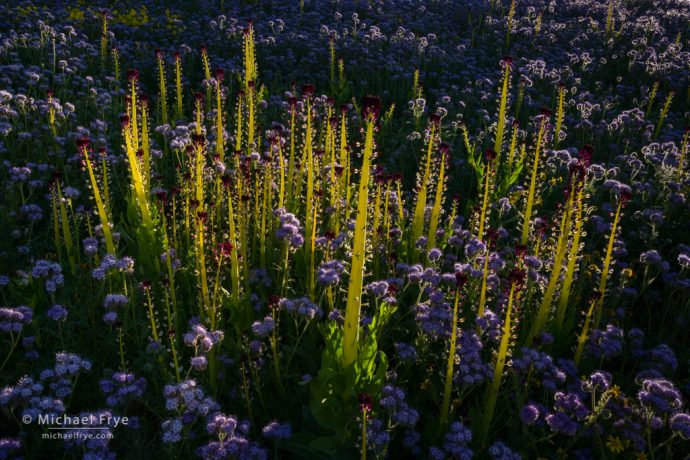 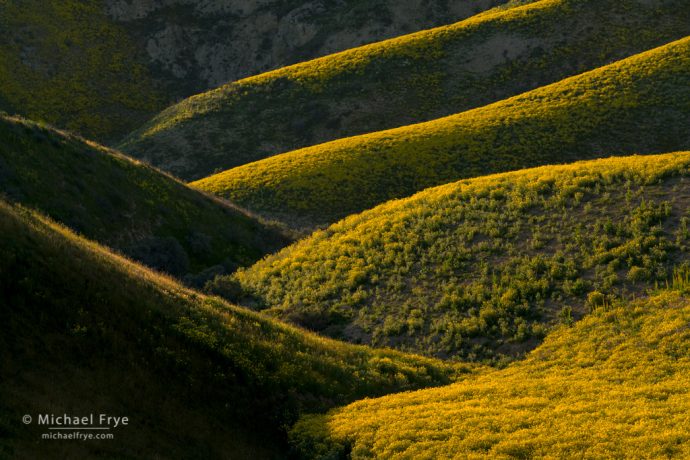 Flower-covered folds in the Temblor Range. While exploring a new area we stumbled upon this scene, with a beautiful zigzag pattern created by backlight on the daisy-covered ridges. 138mm, 1/125 second at f/11, 800 ISO. 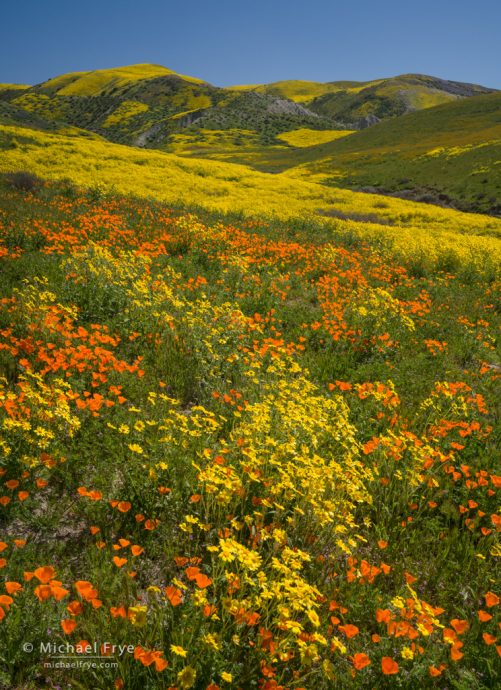 Poppies and hillside daisies in the Temblor Range. The largest patch of poppies we found, complemented by acres and acres of hillside daisies. A late-morning photograph, so the sun was high, but that high backlight worked for the poppies, which only open in sunlight. 35mm, 1/125 second at f/16, 200 ISO.

Related Posts: The Floweriest Piece of the World; Hunting Wildflowers