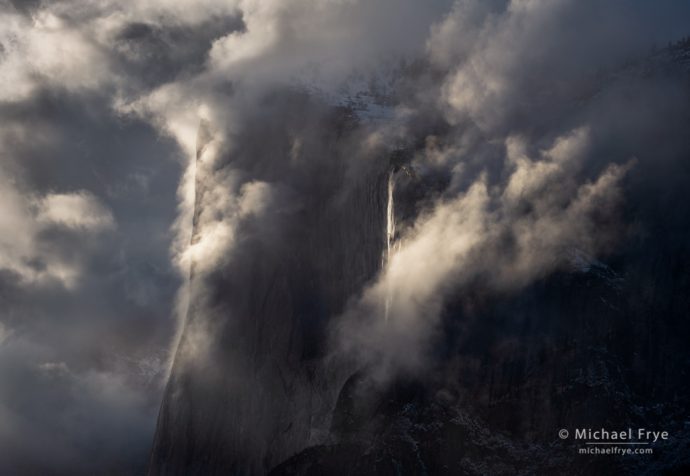 If light is our medium, it stands to reason that exceptional light has the potential to lead to exceptional photographs. It’s not a guarantee, of course; you still need to find a composition that works with that light, and execute the photograph technically. But the potential is there.

That doesn’t mean you can’t make meaningful photographs in ordinary light. I’ve made some of my favorite images in light that most people would consider unexceptional – like overcast, shade, or a clear, sunny day. In many cases, it’s about finding the light that will best showcase the subject, and tell the story I want to tell, and “ordinary” light can be the right choice for that.

But I’m always alert for moments of beautiful, exceptional light, because I know how much that kind of light can add to a photograph. In fact I’m not just alert for those moments – I seek them out. And that, to me, is one of the great joys of photography. What other pursuit motivates you to go to the world’s most beautiful places, at their most beautiful times?

In landscape photography, light is intimately linked to weather. Exceptional light is usually created by some combination of sun and clouds, or sun and fog, as light interacts with the atmosphere to create beautiful, unrepeatable moments.

Looking for such moments, I headed up to Yosemite Valley last Monday morning as a small storm was clearing. This storm brought rain, then snow, ultimately dropping about four inches of snow on the valley floor.

Weather models seemed to indicate that skies would start to clear between 9:00 a.m. and noon. A sunrise or sunset clearing would be better, of course, but there was always a chance that the storm could clear earlier than expected. And also, the forecasts showed that showers might linger throughout the rest of the day, until right before sunset, which increased the odds for some interesting late-day light.

The forecasts were spot on. When I arrived in the valley it was still snowing. The snow stopped by about 8:00 a.m., but it stayed cloudy until about 10:00 a.m., when the sun started to break through.

I photographed trees in the snow, and then that late-morning clearing. It wasn’t that sunrise clearing storm I was looking for, but I made some images I liked. 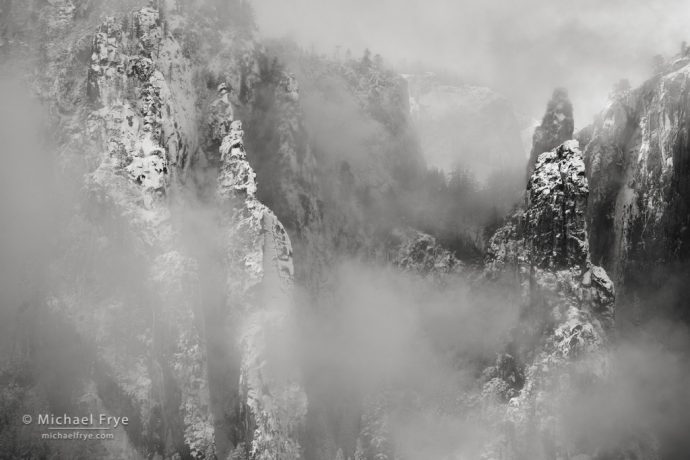 By noon the skies were mostly blue, with just a few clouds hanging around. As predicted, however, the afternoon brought a few snow showers.

Showery weather like that can often create interesting conditions, with mist, sun breaking through clouds, sunbeams, rainbows (though not when it’s snowing), or a miniature clearing storm. I caught one of those mini-clearings from Tunnel View… 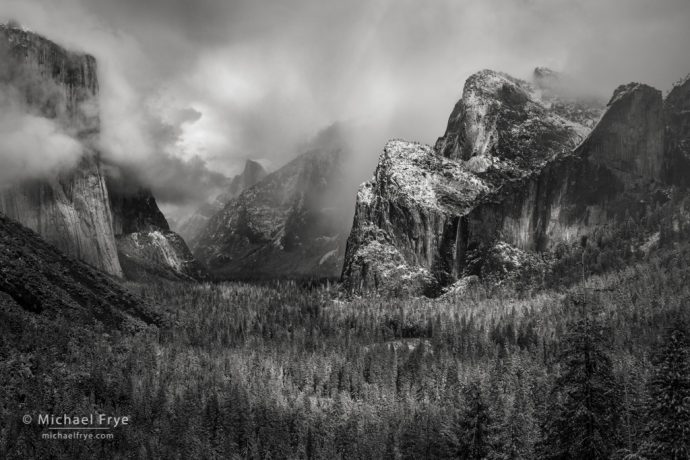 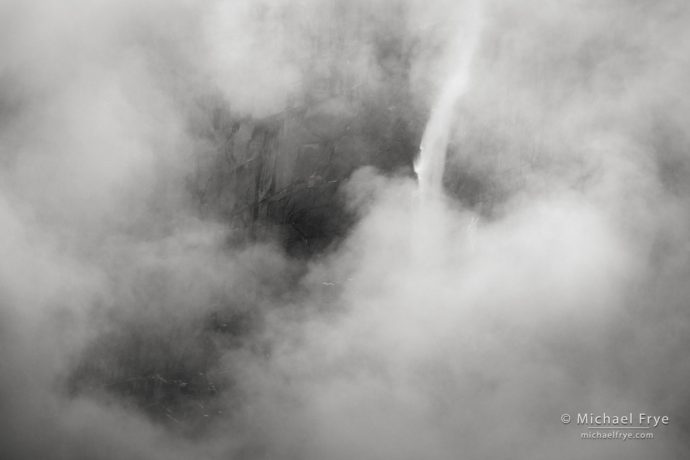 As a later snow squall arrived, I headed for a spot with a view of the west end of Yosemite Valley, hoping that I could get there in time to see skies clearing as this shower passed.

The squall lasted longer than I expected, so I actually had to wait. First I saw sunbeams above the clouds. Then sunlight broke through, hitting El Capitan, instantly generating streams of mist as the sun evaporated lingering moisture.

El Cap might be my favorite rock formation to photograph in Yosemite, partly because its improbably-huge cliff actually generates its own weather. It’s often cloaked in mist when every other formation in the valley is clear. So I’ve witnessed many wonderful moments with this enormous granite monolith wreathed in clouds, but for about five minutes on Monday afternoon I was treated to some of the most beautiful light and mist I’ve ever seen on El Cap.

At times like that things change rapidly, so I first had to switch from a 16-35mm lens to a 70-200mm lens to zoom in on El Cap, then kept adjusting my composition as the light and clouds moved. My favorite moment is the one shown at the top of this post.

Exceptional light is, by definition, rare, and hard to predict. But you can certainly increase your odds of seeing a beautiful light show by paying attention to the weather and going to photogenic locations when there’s a chance of something interesting happening. That means getting skunked sometimes. That means getting wet or cold sometimes. But you might get lucky and see one of the world’s most beautiful places at one of its most beautiful moments.