The Floweriest Piece of the World 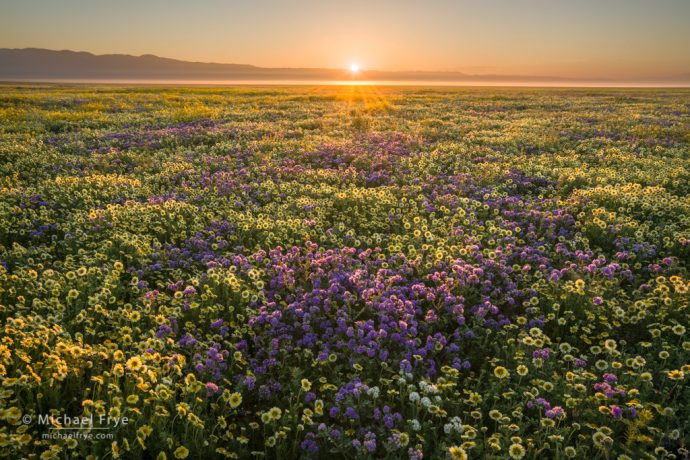 Endless flowers, Carrizo Plain National Monument. This was a very contrasty scene, so I bracketed five frames, each two stops apart, and blended them with Lightroom’s HDR Merge. Normally I would try to capture a photograph like this when just the edge of the sun first peeked over the horizon, in order to avoid lens flare. I did that here, but then kept shooting, knowing that the sun needed to get above the horizon to light the foreground flowers. In this image, made about two minutes after the sun first appeared, the sun was high enough to create some beautiful backlight on the flowers, but luckily there was still no flare. 22mm, f/16, 100 ISO

“The valley of the San Joaquin is the floweriest piece of world I ever walked, one vast level, even flower-bed, a sheet of flowers, a smooth sea ruffled a little by the tree fringing of the river and here and there of smaller cross streams from the mountains.” — John Muir

“The Great Central Plain of California, during the months of March, April, and May, was one smooth, continuous bed of honey-bloom, so marvelously rich that, in walking from one end of it to the other, a distance of more than 400 miles, your foot would press about a hundred flowers at every step.” — John Muir

The once-vast flower beds of California’s Central Valley that Muir described were paved over and plowed under a long time ago. Yet there is a small corner of California that, in a good year, still resembles Muir’s descriptions: the Carrizo Plain.

This remote, dry valley lies west of Bakersfield, separated from the San Joaquin Valley by the Temblor Range. There was never much development in the Carrizo Plain, and most of it remained ranch land until 1988, when the BLM, California Department of Fish and Game, and the Nature Conservancy joined together to purchase an 82,000 acre parcel of land, with the intent of preserving the plain’s unique ecosystem. This area became the Carrizo Plain Natural Area in 1996, and subsequently President Clinton established Carrizo Plain National Monument in 2001. The monument now encompasses 250,000 acres.

Most of the year the Carrizo Plain is a hot, brown, parched grassland, with hardly a tree in sight. But in spring, after above-average winter rains, it can have some of the best wildflower displays in California. Claudia and I camped there last week with our friend Robert Eckhardt, and we marveled at the vast fields of flowers. We found acres and acres of tidytips, phacelia, hillside daisies, fiddlenecks, and goldfields, growing together in dense mats, uninterrupted by shrubs or even a blade of grass. We had to tiptoe carefully to avoid crushing, in Muir’s words, “a hundred flowers at every step.” We also saw vast tracts of deep-yellow coreopsis, and in the middle of the monument we found a large, purple lake of valley phacelia.

We saw pronghorn antelope and tule elk, both reintroduced to this area. A herd of seven pronghorn came by soon after I made the photograph at the top of this post, snorting at our presence. One night, driving back from a hike into the Temblor Range, we saw three San Joaquin kit foxes (an endangered species), along with countless kangaroo rats (probably the endangered giant kangaroo rat). It truly seemed as if we’d stepped back in time, and were seeing what the Central Valley looked like 200 years ago.

Of course we went there to photograph flowers, and had a great time doing so. We found an endless array of potential subjects, and although we camped there for four nights, it seems as if we barely explored all the possibilities.

One of our favorite subjects was the tidytips. These daisy-like flowers, with yellow centers and white tips, have to be among the world’s most cheerful-looking flowers. We found extensive mats of tidytips, sometimes in pure stands, sometimes mixed with phacelia, hillside daisies, or fiddlenecks.

We don’t think of flowers as having behavior, but they do move. Many people know that California poppies only open in sunlight, and evening primroses only open at night. Did you also know that many daisy-like flowers turn to follow the sun throughout the day? This was true of the tidytips, hillside daisies, and coreopsis in the Carrizo Plain. In fact the tidytips anticipate the sunrise, and turn to face east before the sun comes up – as you can see in the photograph at the top of this post.

That was actually my second attempt at photographing sunrise from this area. The first time the temperature was lower, and all the flowers were drooped over and coated with frost. They eventually perked up when warmed by the sun, but I didn’t get my sunrise photo that day.

We thoroughly enjoyed our time in the Carrizo Plain. For a few days we were immersed in a flower-filled paradise, a beautiful remnant of what much of California once looked like. You’ll find some more of my photographs below. We also made a couple of hikes up into the Temblor Range, which was, perhaps, even more spectacular than the valley below. I’ll post some photos of the Temblors soon.

P.S. We didn’t see many clouds, so aside from a few sunrise or sunset images I concentrated on photographing more intimate scenes. Most of these were captured with telephoto lenses, and it often challenging to get everything in focus, so I used focus-stacking for many of the images. I’ve included extended captions to explain how these photographs were made.

P.P.S. If you want to photograph flowers in the Carrizo Plain, keep in mind that these photos were made a week ago (or more) so things have changed. Flowers don’t last long! That said, there may be new species blooming that we didn’t see. Also, I’ve seen online reports that many flowers have been trampled. This probably only applies to some of the more popular, easily-reached spots, and the flower beds of the Carrizo are vast, so I’m sure there are still unspoiled areas. But please minimize your own impact and avoid trampling the flowers, so that others may enjoy them, and the flowers can reproduce and bloom again. (This applies to any wildflower area, not just the Carrizo Plain.) 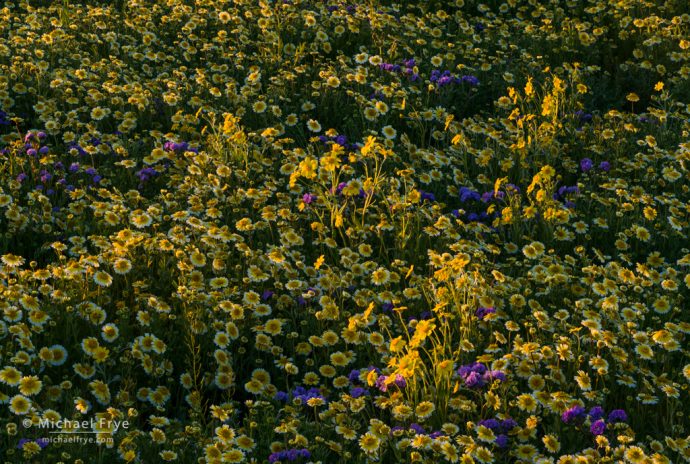 Hillside daisies, tidytips, and valley phacelia in late-afternoon light, Carrizo Plain National Monument. I rarely photograph flowers with sidelight, but these sidelit hillside daisies caught my eye, poking up out of a sea of tidytips and phacelia, catching the late-afternoon sun. 106mm, 1/4 second at f/16, 100 ISO, focus-stacked. 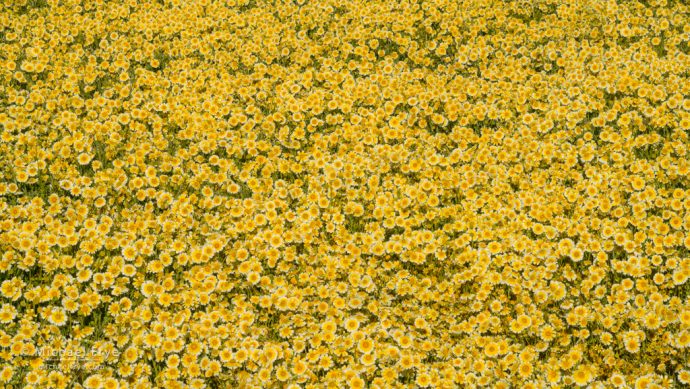 Wall of tidytips, Carrizo Plain National Monument. I had been concentrating on photographing tidytips with backlight, but then decided to turn around and see what they looked like with frontlight. They looked great, forming wonderful patterns. I picked out a particularly dense patch and zoomed in to fill the frame. 135mm, 1/45 second at f/16, 100 ISO, focus-stacked. 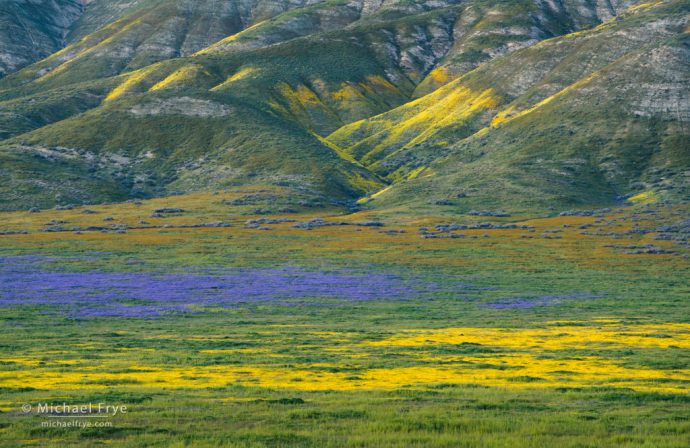 Wildflowers and hills of the Temblor Range, Carrizo Plain National Monument. I used a small hill to get a slightly-elevated view over this sea of flowers toward the hills beyond. 183mm, 8 seconds at f/11 (it was dusk), 200 ISO. 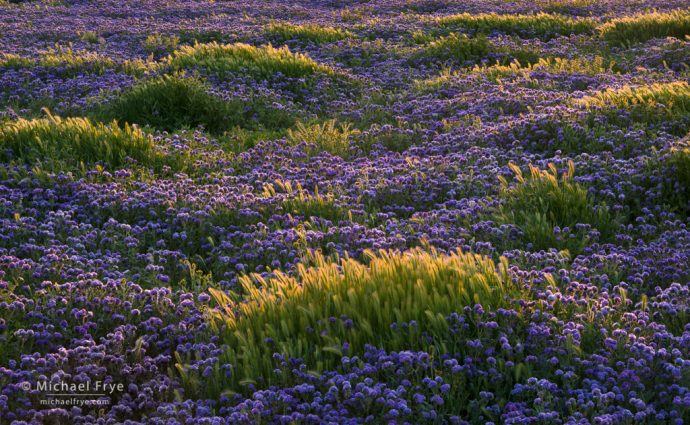 Waves of foxtail grass amid a sea of valley phacelia, Carrizo Plain National Monument. One afternoon we walked out toward the purple lake in the middle of the monument. Near the edge of this lake we found the phacelia mixed with some beautiful foxtail grasses, backlit in the warm, late-day light. 127mm, 1/6 second at f/16, 100 ISO, focus-stacked.