Before our recent redwoods workshop Claudia and I drove inland, toward the higher elevations of Redwoods National Park, and found a beautiful, dense patch of lupines in one of the “prairies,” as they call them in that part of California – an open, grassy area amid the dense surrounding forests. We also found some photographer friends there, Terry Donnelly and Mary Liz Austin, and met two other photographers, Ed Callaert and Bruce Jackson. It’s amazing how you meet photographers in the most out-of-the-way – yet beautiful – places.

On that first afternoon the light wasn’t particularly special, but I did manage to make one image I liked (the first one below) in soft light after the sun set. Two days later, in Crescent City, we woke early and saw a high fog bank, or marine layer, and thought maybe we might see fog among the lupines. Claudia and I arrived about 15 minutes before sunrise, and the lupines were right at the top of the fog bank, which was perfect, creating an opportunity to photograph sun, fog, and lupines together.

The grasses were soaking wet, so I put on rain pants and waterproof boots. It didn’t take long for the moisture to seep into my socks anyway, but I paid little attention, as the sunrise was starting to color the fog, and there were lupines waiting to have their picture taken. Claudia and I were alone for a little while, but soon Terry, Mary, Ed, and Bruce arrived, and we all photographed the lupines as the sun came up over the trees and lit the fog and flowers. We even had sunbeams for a short time.

All my images shown here were made with a wide-angle lens (Sony 16-35 f/4), which is unusual for me. But the lupines weren’t mixed with other flowers, and therefore didn’t lend themselves readily to tight views focused on patterns of flowers. Also, the lupines were tall, so in most cases you had to get up close to see over the flowers to the trees (and sometimes fog) beyond. That required using a wide-angle lens and pointing the camera down to try to fill the foreground with flowers. Being so close to the lupines also meant that the exact camera position (including height) was important. In each of these compositions I tried to put the camera in front of a thick patch of flowers, and find an interesting pattern among the color.

Unfortunately the lupines were past peak by the time our workshop started, but I’m glad I was able to catch some moments of fog, light, and flowers while they lasted. It’s been a great spring; we’ve photographed the amazing bloom in the Carrizo Plain, dogwoods in Yosemite, and then lupines and rhododendrons in the redwood country. And I’m hoping to photograph more wildflowers in the Yosemite high country this summer. 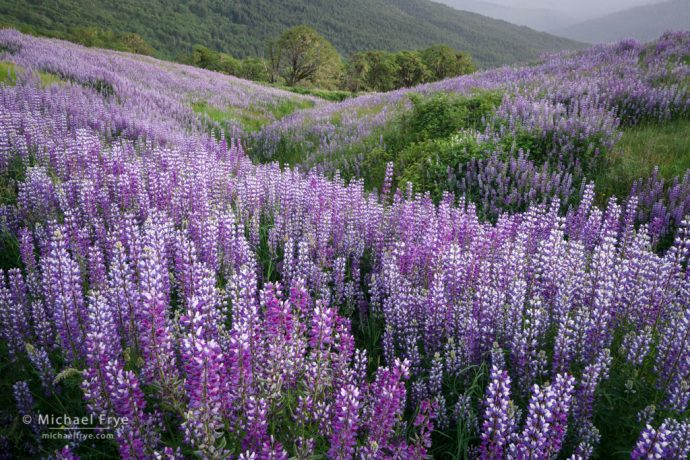 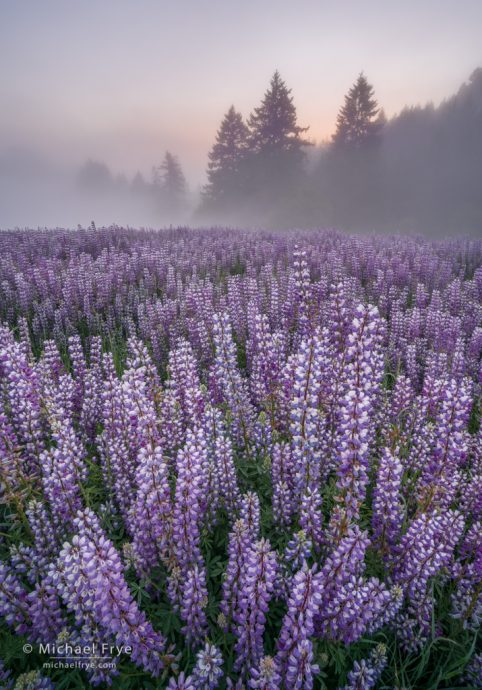