How to Shade Your Lens 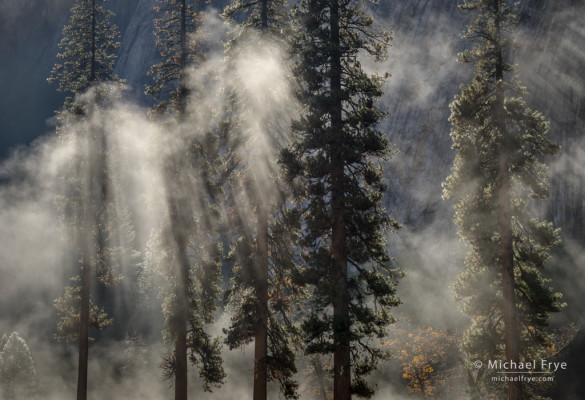 Natural light comes in an infinite variety of beautiful flavors. I love them all, but if I had to pick a favorite, it would probably be backlight, because it consistently delivers some of the most interesting images. All of the photographs from my last two posts, the ones from above the fog layer, were made with the camera pointing toward the sun. The photograph above, one I haven’t posted here before, captures a moment when backlit mist rose into the pines in Yosemite’s El Capitan Meadow. This next image, voted my top photograph of 2014, was also lit from behind, with the sun just above the frame: 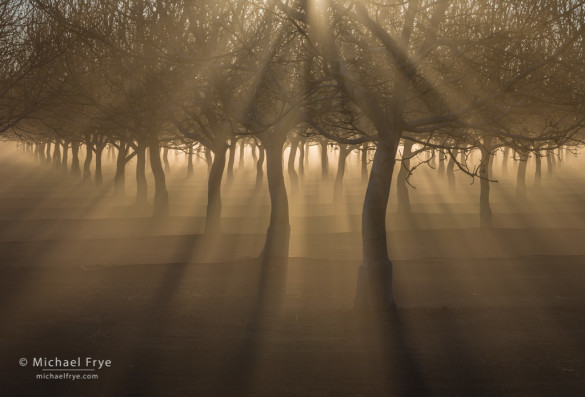 Sunbeams and fog in a Sacramento Valley orchard, California

The sun was also just above the picture here, in my second-most popular photograph of 2013: 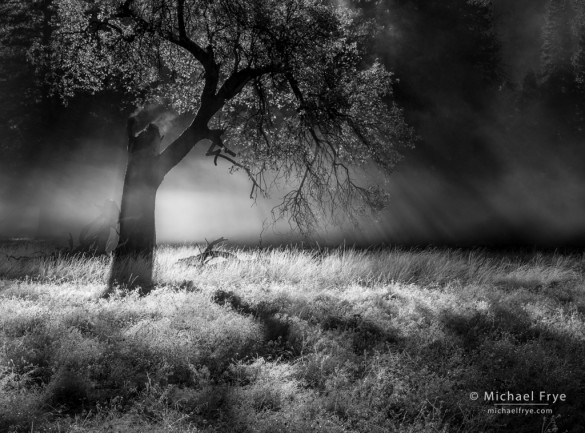 But while backlight can be beautiful, it’s difficult to work with. For one thing, looking into the sun is hard on the eyes. Backlight also creates a lot of contrast, so exposures can be challenging.

But perhaps the most difficult aspect of dealing with backlight is lens flare. Any time sunlight hits the front of your lens you risk getting flare in the form of bright spots, streaks, or an overall washed-out look to the photograph.

There are basically two ways to avoid flare while shooting into the sun: either hide the sun behind a tree, mountain, or some other object, or shade the lens with your hand or a hat. Putting the sun behind tree branches and creating a starburst effect can be very effective; I talked about that in this post. And it is sometimes possible to include the sun and avoid flare even without hiding the sun behind something. But today I’m going to discuss the art of shading the lens when the sun is just out of the frame.

First, forget about your lens hood: it’s almost useless for shading the lens. That doesn’t mean you should throw it away, because it still might protect your lens if your drop it, and it’s helpful for keeping the front glass dry when you’re photographing in the rain. But if the sun is just out of the frame, sunlight is still going to hit the front of your lens and create flare even with the hood on. So you’ll have to shade the lens with your hand, or a hat. I recommend using your hand, since it’s always available, but a hat will work too.

When the sun is just out of the frame, you need to get your hand (or hat) as far away from the lens as possible. If you reach out from the behind the camera your hand will probably be only a few inches in front of the lens, which makes it impossible to bring your hand down far enough to shade the lens without also getting your hand in the picture.

Instead, put the camera on a tripod, and step around in front of the camera, so you can get your hand about two feet away from the lens. Use the flat edge of the bottom of your hand, then watch the shadow your hand is casting, and bring that shadow down so it barely covers the front glass of the lens. Then use your other hand to trip the shutter with a cable release or remote (you can also use a two-second self-timer if you can reach the shutter button). Here’s a photo to show the basic position: 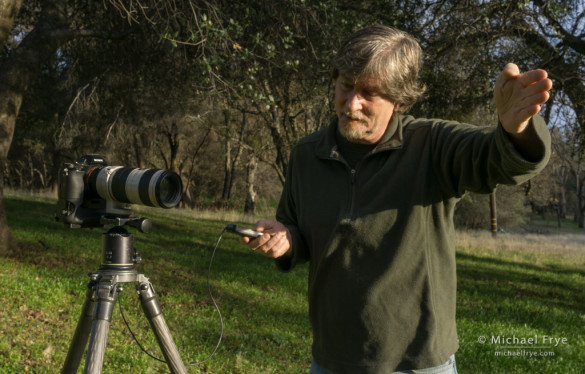 To shade the lens without getting your hand in the picture, step around in front of the camera and get your hand about two feet away

And here’s a closeup showing how the shadow of my hand just barely covers the glass, and no more (it’s a different lens, but you get the idea): 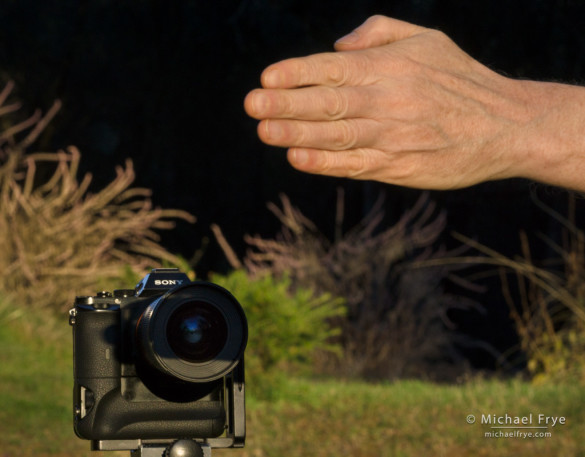 If the sun is off to the side, rather than above the frame, orient your hand vertically, and bring the shadow of your hand in from the side of the lens, rather than from above, like this: 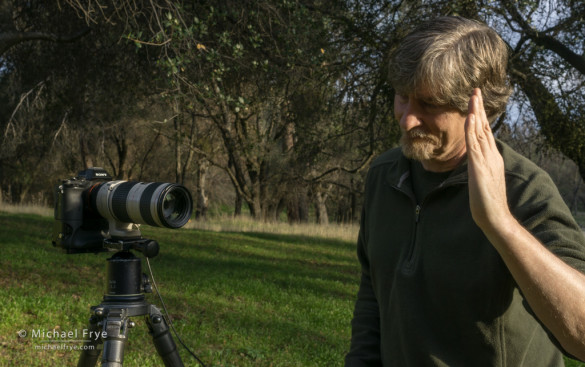 If the sun is to the left or right of the frame, turn your hand vertically and shade the lens from the side

After you trip the shutter, look at the photo you just took and see if your hand is in it. If it is, try again, and this time move your hand until the shadow only covers the two-thirds of the glass, or even half. Half is often enough to eliminate most of the flare. Or if your hand appears in just a corner of the frame, that means your hand was slanted. Try again, and make sure the bottom of your hand is straight, parallel to the ground (or vertical if you’re bringing it in from the side). If your sleeve appears in the photo, roll up your sleeve!

Here are three versions of one of the images from my last post. The sun was just above the top of the frame on the left side, which made shading the lens challenging. The first image was unshaded, and while there are no bright spots or streaks, flare made the photograph look more washed out than the other versions below (check the shadows, especially on the left side). I stepped around in front of the camera to shade the lens, but as you can see from the second version below, part of my hand got in the frame. So I tried again, this time bringing my hand down so it only covered the top two-thirds of the glass. That worked: the third image is the one I posted Monday, where I successfully shaded the lens, and eliminated most of the flare, without getting my hand in the picture. 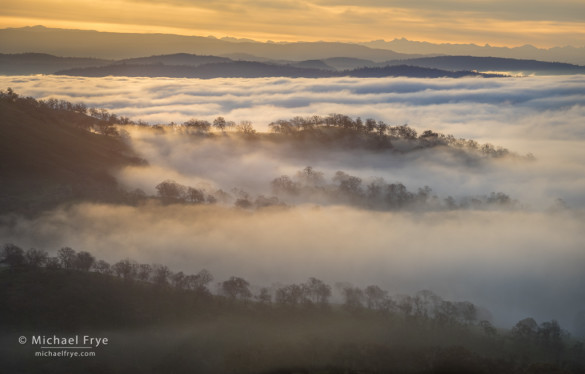 With the lens unshaded there are no obvious spots of flare, but the photograph looks washed out compared to the versions below 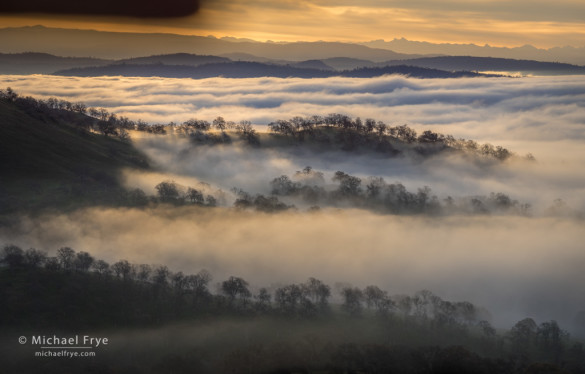 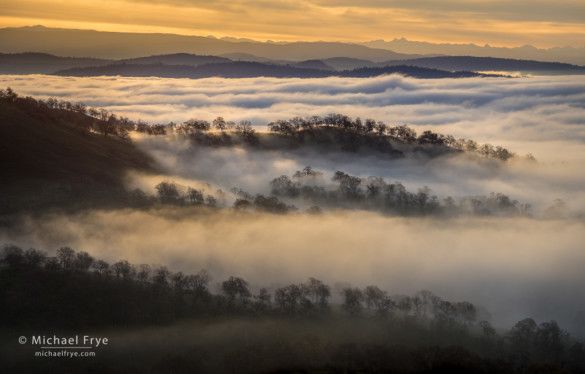 Learning how to do this takes practice, but it’s worth it. If you can shade your lens even when the sun is just barely out of the frame, you can photograph some of nature’s most beautiful light.