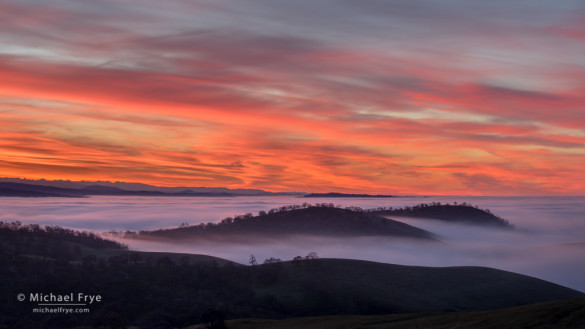 As I mentioned in my last post, the fog display on Thursday morning might have been even better than Wednesday morning. It didn’t look very promising at first. There was no fog at our house, and none in Mariposa either, so I knew I had to go lower. Claudia was with me this time, and we decided to take a back road that headed west into the lower foothills. At one point we crested a ridge, and there, below us, was the sea of fog.

Again I was fortunate to find a good viewpoint looking toward the southeast. This time there was a layer of high clouds above the fog, already starting to turn color with the sunrise. Best of all, a double-peaked hill was poking up out of the fog in that direction. The image at the top of this post is an early one from that morning, with a brilliant sunrise above the fog and hills.

After the sun rose, the fog lifted into some nearby ridges, getting high enough to almost – but not quite – obscure that double-peaked hill. Soft backlight filtered through the high clouds, bringing out beautiful textures in the fog (see the two images below).

All the photographs here and in the last post were made with my 70-200mm zoom. In some cases my view was restricted by nearby trees that I wanted to keep out of the frame, and a wider lens would have introduced distracting branches. But mostly I used the telephoto lens because the most interesting areas were small parts of the scenes in front of me, and the long focal lengths allowed me to fill the frame with those pieces.

Telephoto lenses also compress space, which helped create layered patterns out of ridges and bands of fog that were many miles apart. And in some of these images, the longer focal lengths helped to bring in the distant peaks of the southern Sierra, and make them look big enough to become part of the composition and the story.

It was very satisfying to be able to make photographs of something I’d had in mind for 30 years – not once, but twice. And I’m sure I’ll try again if the right conditions return. 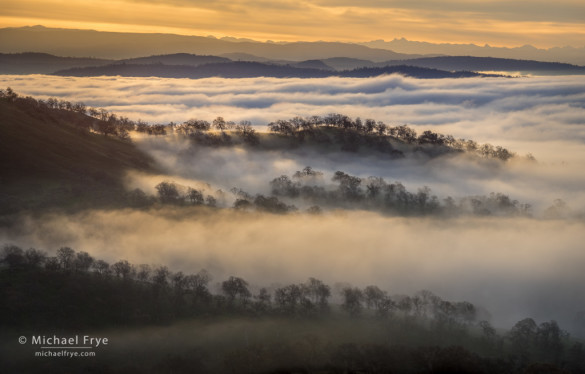 Foothill ridges rising above the fog with southern Sierra Nevada peaks in the distance, Mariposa County; focal length was 169mm 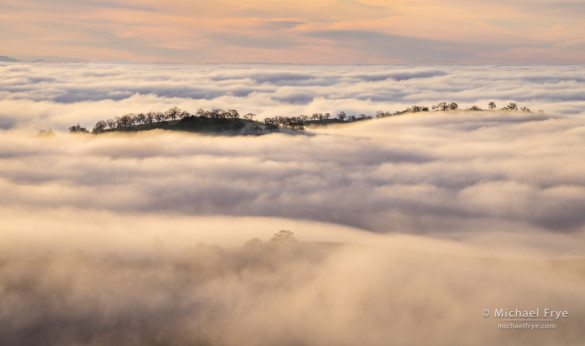 Related Posts: Oceans of Fog: Part One; Oaks in the Mist; “Ordinary” Landscapes