When a Scene Composes Itself 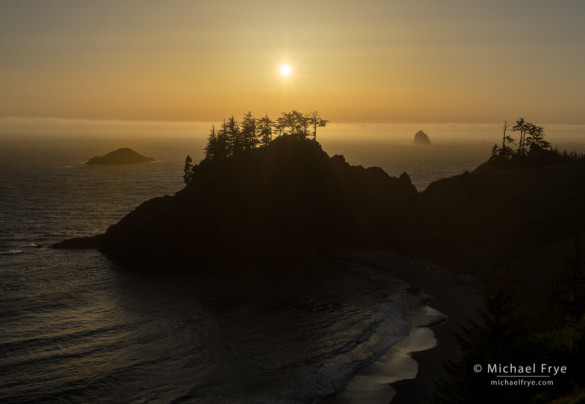 After our redwoods workshop, Claudia and I drove north and spent a couple of days along the Oregon coast. I’d never been to this area before, so on our first afternoon we scouted a number of locations north of the town of Brookings. We made several short hikes down steep trails to the coast, with correspondingly steep climbs back out. Though we found some nice spots, none made me jump up and down. Sunset was approaching, and I had to decide where to go. I could see some interesting sea stacks to the north, and decided to drive in that direction.

But we never made it to those sea stacks, because before we could get there we checked one more viewpoint, and immediately realized we didn’t need to go any further. We’d found a scene that practically composed itself, with all the elements nicely balanced and arranged: two stands of silhouetted trees on a ridgeline, with an offshore rock placed perfectly in the gap between the trees, and another rock spaced neatly out to the left. There was even a scalloped line of waves in the foreground to lead the eye toward that gap and the distant rock.

It’s all too rare to find a near-perfect arrangement like this. Even when something catches your eye right away, it usually takes at least a little bit of work to find the best way to frame it. But even when you find a ready-made composition, you still need the right light to make it work, and you still have to execute the photograph.

When we found this scene, we were looking right into the late-afternoon sun. My first thought was to wait until the sun set, which would reduce the contrast, make the exposure easier, add some color, and avoid problems with lens flare. But as I stood there, I was drawn to the light at that moment. The sun itself was nicely positioned, balanced between the two offshore rocks. The distant fog bank silhouetted the pyramid-shaped rock perfectly. There was a beautiful, late-day mood to the scene. So I decided to try it.

To deal with the contrast, I set the camera to auto-bracket three frames, each two stops apart, in case I needed to blend exposures together later. For the lens flare, I used a trick that a workshop student once taught me: using my thumb to block the sun. Basically it worked like this: I bracketed three photographs normally, then stuck my thumb into the top part of the frame, just far enough to cover the sun, and bracketed three more photographs. This gave me six images: three bracketed exposures with my thumb in the frame, but no flare, and three bracketed exposures with no thumb, but spots of flare in the bottom half.

Then I stacked three of those frames together as layers in Photoshop, and used layer masks to blend the layers together and create the finished image you see at the top of this post. The bottom two-thirds of that final image is all one frame: the lightest of the three images with my thumb in it. Since my thumb covered the sun, there’s no flare, and you don’t see the thumb in the finished image because I didn’t use the top part of that frame. The sky in the final image comes mostly from the middle exposure without my thumb. I also used the darkest of the thumb-free images to blend in a little more detail around the sun itself. To help you better understand this whole idea, I’ve included the three original images here: 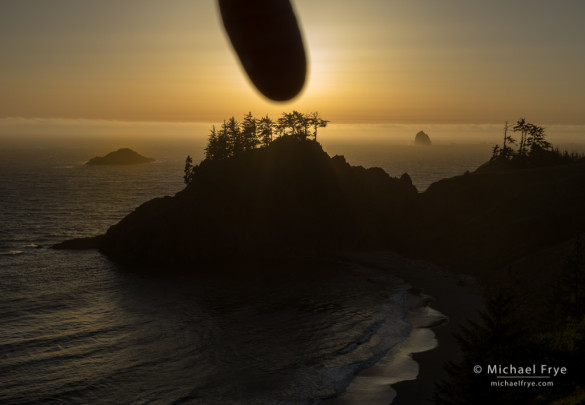 The bottom two-thirds of the final image comes from this frame, with my thumb over the sun to prevent flare. 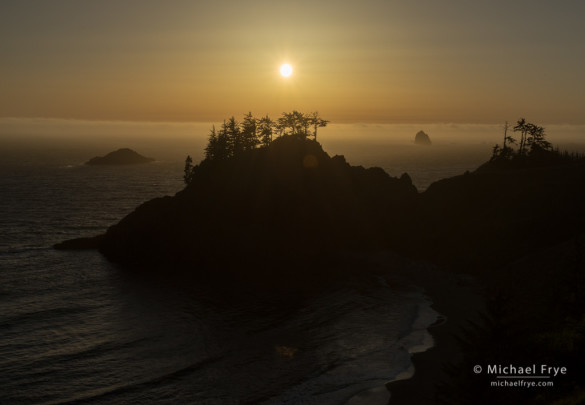 Most of the sky in the final image comes from this frame. (Note the spot of flare just below the trees, and another spot in the water near the bottom.) 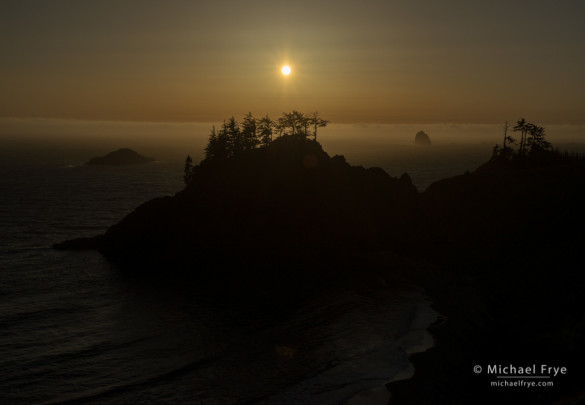 I used this frame to blend in more detail around the sun itself into the final image.

All this manipulation was done to achieve a final result that I hope looks natural and unmanipulated. To me the finished image closely resembles how the scene actually looked to my naked eye – with no lens flare (our eyes don’t create flare), and with about the same amount of detail in highlights and shadows.

I stayed at this spot until well after sunset, and made many other images, but ended up liking this first one, with the sun right in the frame, the best. So I guess one moral of this story is to trust your instincts. My instincts told me not to wait, despite the difficulty of photographing directly into the sun. I’m glad I listened.

On the other hand, most situations aren’t like this. Many times the best composition is not immediately obvious, and your second or third idea might work better than your first. And late in the day the light usually gets better as the sun gets lower. So if you find a great scene with good light, work it, and keep working it until the light is gone. That’s what I did here, and even though I ended up liking my first attempt the best, that’s the exception, not the rule.

Related Posts: Courting Luck, Part 2: Adapting Your Composition to the Conditions; When Separation is a Good Thing