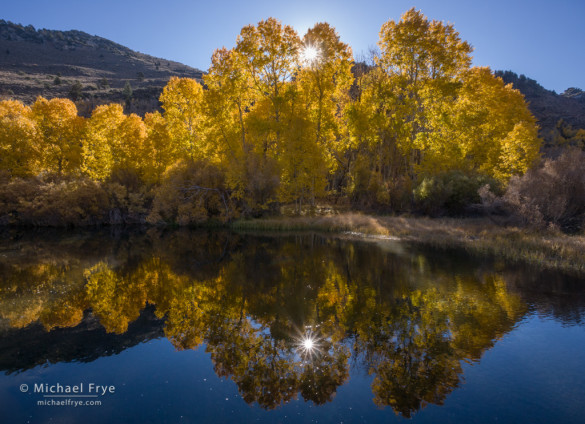 I’ve always felt that the best photographs capture a mood or feeling. It’s easier to convey a mood when the weather gets stormy, but how do you capture a mood on a clear, sunny day? The answer, I think, is to go with it—to emphasize the sun, the blue sky, and the brightness of the day. Find the visual elements that say “beautiful, sunny day,” and highlight them.

One way of doing this is to include the sun in the frame. Nothing says “sunny and bright” like the sun itself. But putting the sun in your photograph brings challenges. First, you’re likely to get lens flare. This is not the end of the world—in fact, many photographs use lens flare to great effect—but sometimes the flare can be distracting. The other challenge is getting the exposure right.

I made this photograph on Wednesday morning, the last day of my second Eastern Sierra Fall Color workshop. It was a beautiful scene, but technically quite challenging to capture. I wanted to show the sun, and get the sunburst effect, but I didn’t want flare. To avoid the flare I had to partially hide the sun behind branches and leaves, but this was doubly difficult because I had to get the position of both the sun and its reflection right. And, of course, the sun was constantly moving.

Handholding makes it easier to move and adapt to the changing sun position, but I wanted to bracket exposures here, in case I needed to blend images later, so that meant using a tripod to keep the framing consistent, and constant slight adjustments of the tripod position to adapt to the motion of the sun. Getting the sunburst effect required a small aperture, so I used f/22, and auto-bracketed three frames, each one stop apart. On many tries I didn’t get the sun in quite the right position, so I missed the sunburst effect in either the sun or its reflection. But on a few occasions I got it right, like in the version shown here.

When the sun is in the frame it can be difficult to judge exposures in the field. It’s normal and natural for the sun itself, and the sky around the sun, to be washed out, which means you should see a small spike at the right edge of the histogram, and some blinkies in and around the sun. In fact if you don’t see any blinkies around the sun the photograph is probably underexposed. On the other hand, you don’t want the whole sky blinking at you. I try to find an exposure that shows some blinkies in and around the sun, and bracket one stop on either side of that. (For more about histograms and blinkies, see this post.)

Since the release of Lightroom 4 and Adobe’s 2012 Process Version, with its phenomenal ability to balance high-contrast scenes in a natural-looking way, I rarely need to blend exposures any more. So even though I bracketed for insurance, I figured that one properly-exposed frame would probably be enough. In fact, processing this photograph in Lightroom was rather easy.

I used the middle exposure in my bracketed sequence, and started by making a compromise Exposure adjustment—something in between the ideal brightness for highlights and shadows. Then I pulled down the Highlights slider, pushed up Shadows, and used the Graduated Filter tool to lighten the water a bit more. I made a few other minor tweaks, but that’s basically it. Here’s what the original Raw file looked like at my default settings, and I’ve also included a screen shot of the Basic Panel settings in Lightroom for the finished image. 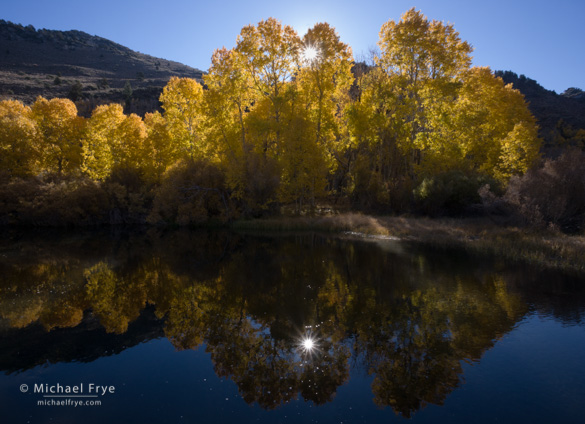 The unprocessed Raw file at my default settings 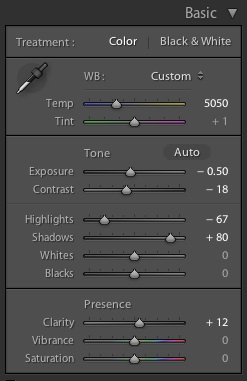 Basic Panel settings in Lightroom for the final, processed image (at the top of this post)

If you’re interested in a more in-depth look at these techniques, I demonstrate how to process high-contrast scenes in Lightroom at 21:04 in this free video tutorial. That video is actually the second part of a two-part series, and in the first video I explain how the Basic Panel Tone Controls in Lightroom work. And in my latest ebook, Landscapes in Lightroom 5, I take you step-by-step through processing six different images, including several high-contrast scenes.

So the next time you’re faced with those “boring” blue skies, take what nature gives you, and try to emphasize the feeling of that bright, sunny day. While including the sun can be tricky, it’s worth trying, because it can add greatly to the mood and emotional impact of the image.

P.S. By the way, do you know which way the sun was moving in this scene? I’ll give you two hints: it was morning, and I was in the northern hemisphere. That’s all you should need to know to figure out which direction the sun was headed. Knowing how the sun will move is a basic photographic skill, something you need to learn if you want to anticipate how the light will change.