Oceans of Fog: Part One 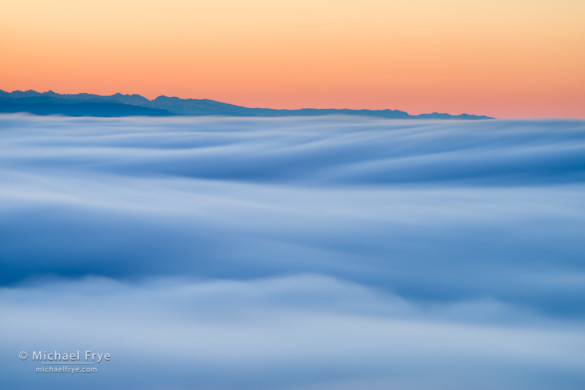 After the episode of dense fog in the Central Valley that I mentioned in my last post, the fog lifted into what meteorologists call a stratus deck last week – essentially a layer of fog that’s slightly above ground level. From the Central Valley the stratus deck would look like a low overcast. If you were to drive out of the valley into the Sierra, you’d climb into the clouds, and into a layer of fog, and then eventually get above the fog and into sunshine. And if you could find a hill or ridge that rose above the stratus deck, you’d be able to look out over a sea of fog.

That sight should be familiar to people who live in the San Francisco Bay Area, or anywhere along the California Coast. When I lived in the Bay Area in the early ’80s, I remember driving along Skyline Drive on the Peninsula and looking out to the west over a sea of fog covering the ocean. At that time my interest in photography was in its infancy, but it was a beautiful sight. I’ve had that mental image in my mind ever since, and have long wanted to make photographs from above a sea of fog.

Since then I’ve seen some wonderful images of the Golden Gate Bridge poking up through fog, and other photographs with a similar theme from the Bay Area, and other spots. Last summer I got a chance to look down on fog at the mouth of the Klamath River, and made a couple of photographs that I really liked, but that wasn’t really the sea of fog that I remember seeing long ago in the Bay Area.

So that stratus deck last week piqued my interest. It seemed possible to climb a hill and get above the fog somewhere, but it would require being in the right spot at the right time. The fog moved in and out, and up and down, in unpredictable ways.

Searching for the right situation, on Tuesday afternoon I drove up a local mountain with radio towers that every Sierra foothill town seems to have. By Sierra standards this mountain isn’t very big, but it’s summit reaches up over 4,200 feet, which is 2,000 feet above the surrounding valleys.

That afternoon the fog was moving in from the Central Valley. On my way up the mountain I drove through a thick layer of fog, then out into the sunshine above, with a sea of fog spreading out to the west. Unfortunately it’s hard to find good western views in this area (it’s mostly private property). But I did find one spot where I could photograph the sun setting over the sea of fog: 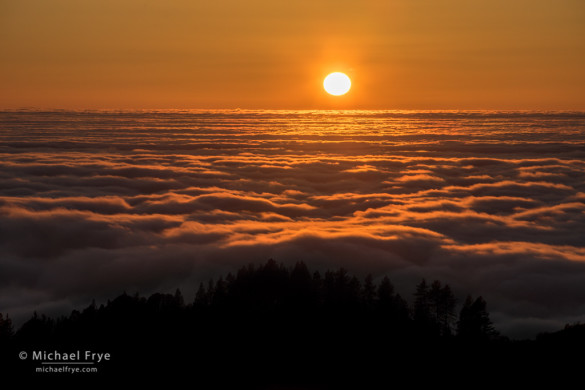 That evening I noticed a spot along the road with a good view to the southeast, so I decided to try again the next morning, hoping that the fog would spread further in that direction. And luckily it did. There was fog at my house that night, at 2,700 feet, which was a good sign, and when I got above the fog I could see a vast ocean of fog all around the mountain. The view to the southeast was spectacular, with the dawn coloring the sky above the distant high peaks of the southern Sierra, and oceans of fog below.

Probably my favorite photograph from that morning is the one at the top of this post. I used a 30-second exposure to blur the motion of the clouds, creating the pillowy texture in the fog. Then the sun cleared the peaks, and raked across the top of the clouds, creating some wonderful textures. I’ve included some more images from that morning below.

That was a beautiful sunrise, and I didn’t think that could be topped, but the next morning might have been even better. I’ll save those images for my next post. 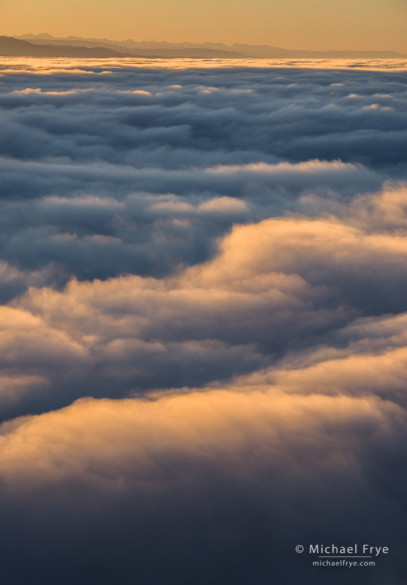 Fog and peaks of the Sierra Nevada from Mt. Bullion at sunrise, Mariposa County, Wednesday morning 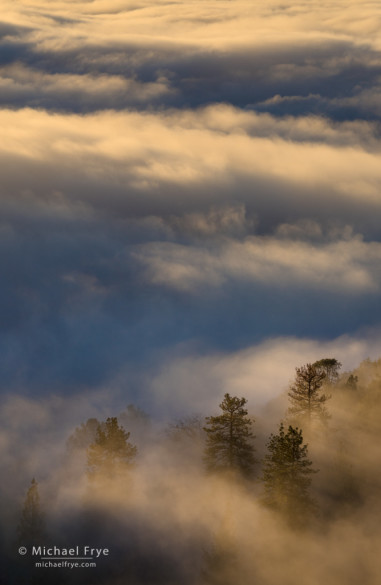 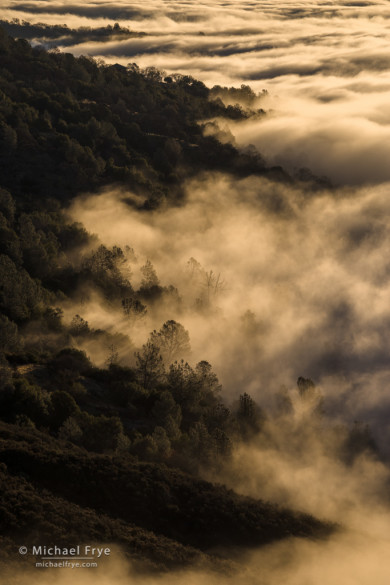