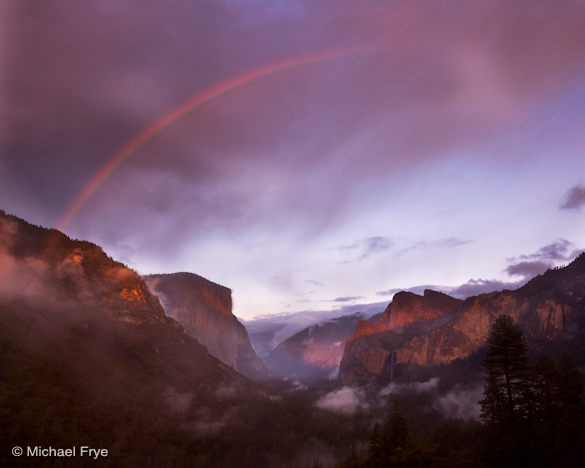 As the days get shorter and cooler, the photo opportunities in the Yosemite area get hotter. It’s time to take a look at what to expect during the next few months.

You won’t find much autumn color in Yosemite before October, but the indian rhubarb in Bridalveil and Leidig Meadows can add an early splash of yellow, as in this photo from the west end of Leidig. Near the fall equinox on September 22nd, and for a couple of weeks afterward, the sun sets at a good angle for Tunnel View, lighting both El Capitan on the left and Cathedral Rocks on the right. The two or three weeks before the spring equinox are even better, as there’s usually water in Bridalveil Fall, but fall can be great in the right weather conditions, like last year when I saw the rainbow at the top of this post.

On the east side of the Sierra Nevada the high-elevation aspens usually start turning yellow in late September. The Bishop Creek area, west of Bishop, and Convict Lake, just south of Mammoth Lakes, are two of the early season hot spots. The road to Virginia Lakes, north of Lee Vining, can also have early fall color.

In a typical year, the aspen color show progresses down the mountainsides on the east side of the range and reaches the lowest elevations near the third week of October. There’s no real peak, because the timing of the best color depends on the location. I prefer photographing the larger trees at lower elevations, so the third week is often my favorite time, but there’s usually plenty to photograph earlier in the month as well. Some of my favorite spots are Lundy Canyon, Lee Vining Canyon (right), and the June Lake Loop.

The maples, dogwoods, cottonwoods, and oaks in Yosemite Valley usually turn a bit later. The peak color typically arrives around the end of October or beginning of November. Dogwoods can can often be found turning gold or even red by mid-October at higher elevations along Highway 41, Highway 120 west of Crane Flat, and in the Tuolumne Grove.

Blueberry bushes lining the shores of Siesta Lake along the Tioga Pass Road also turn red and orange near the middle of the month (below). From Taft Point, a one-mile hike from the Glacier Point Road, the late-afternoon sun strikes El Capitan at a great angle.

This might be my favorite month in Yosemite Valley. The peak autumn color frequently arrives at the beginning of the month and yellow and gold leaves often linger for weeks afterward. Frost and ice begin forming in the meadows and along the creeks and rivers, and sometimes an early snowfall spices up the landscape. Sunlight has already reached winter angles, raking across the face of Half Dome in the late afternoon and turning El Capitan gold at sunset.

For more detailed information, including directions to most of the locations mentioned here, pick up a copy of my book The Photographer’s Guide to Yosemite.

Addendum, September 2011: Now The Photographer’s Guide to Yosemite is available as an iPhone app!