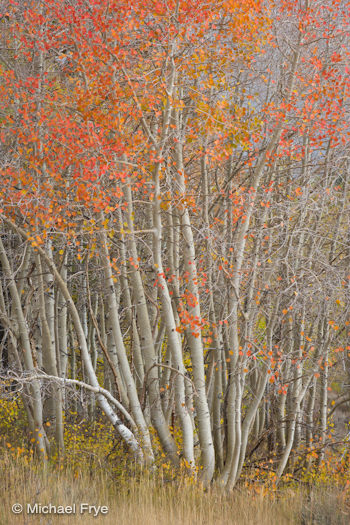 The first winter-like storm of the season passed through Yosemite during the last two days, bringing over two inches of rain to Yosemite Valley, and enough snow to close Tioga Pass and necessitate R2 chain requirements on Highways 41 and 120 yesterday. There’s no word on when Tioga Pass will reopen; if I had to guess, I’d say sometime this weekend.

Although autumn was off to a late start on the eastern side of the Sierra, some of the higher-elevation spots outside of Bishop already had turned color. A storm like this will usually blow off the leaves that have already changed, and make partially-turned leaves turn brown. The good news is that most of the aspens on the east side were still green, and probably won’t be affected by the storm. However, it will be a week or two before those green leaves turn yellow, and color might be sparse over there during the next week.

The same thing happened last year: a large storm closed Tioga Pass on October 4th, one day earlier than this year. And yellow aspens were scarce for a week or so. But we found some nice color on October 11th, as you can see in the accompanying photo, and even better color a week later.

Meanwhile in Yosemite it’s early for autumn color, and it’s likely to be a couple of weeks before things really start to change. Peak color in Yosemite Valley usually doesn’t arrive until the end of October or beginning of November. I’ll keep you posted on what I find. Another good way to follow current conditions is through the CalPhoto group on Yahoo. And if you’ve been out photographing fall color recently, please let us know what you found by posting a comment!

Related Posts: Wild Weather, and the Annual Fall Freakout; A Trip to the Eastern Sierra; Autumn in Yosemite