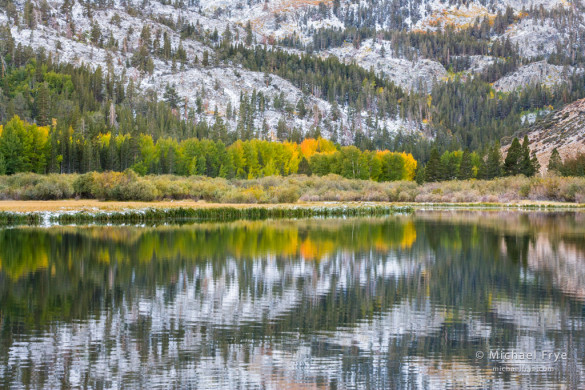 Reflections in North Lake on Sunday morning after a dusting of snow, Inyo NF, CA, USA

Last weekend my wife Claudia and I made our annual pilgrimage to the Millpond Music Festival in Bishop, over on the eastern side of the Sierra Nevada. We had a wonderful time, as usual; this is either the 14th or 15th consecutive year we’ve attended this event, so clearly we love it.

On the drive over we could see some color changes starting to appear in the highest aspen groves, like where Warren Canyon meets Lee Vining Canyon along Highway 120 east of Tioga Pass, and on the higher reaches of the Parker Bench, above the northern end of the June Lake Loop just southeast of Parker Lake.

Saturday evening it sprinkled in Bishop, and further north several inches of snow fell on Tioga Pass and Sonora Pass, temporarily closing both routes. I knew that the nearby upper reaches of Bishop Creek Canyon would likely have a dusting of snow in the morning, and I’d heard that the colors were already changing up there, so I rose early Sunday and drove up to North Lake before sunrise. 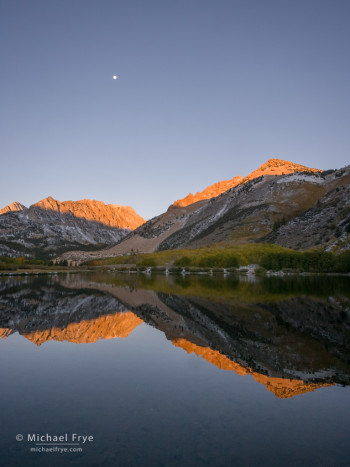 North Lake has become an extremely popular photo location in recent years; on an early-October morning several years ago I found at least 30 photographers lined up along the eastern shore. But on Sunday there were only a few photographers there, no doubt because the peak color hadn’t arrived yet. The lack of crowding allowed me to roam around and explore all the different viewpoints, and I made a number of different compositions. I did a version of the classic sunrise scene, with the setting moon overhead (shown here), but also worked with tighter views focused on reflections in the lake or along the outlet creek, with the dusting of snow adding a nice accent to some scenes.

After the sun reached the water and killed the reflections I drove up to Lake Sabrina, and found some nice color on the slopes above the far shore of the lake. But the water level was very low. Sabrina is really a reservoir; the entire eastern half of the lake near the dam was completely dry, and it was not an appealing scene.

I found a few patches of good color in the area, notably near the outlet to North Lake, and along the road below Lake Sabrina, but most of the aspens were still green or lime green. It will be another week or so before these groves reach their peak color—if the cold snap from this past weekend didn’t affect the leaves. Sometimes a hard frost will make already-turned leaves fall off, and cause the leaves that are in the process of changing to turn brown. The dark-green leaves are usually not affected.

Overall I’d say the eastern-Sierra color is a little early at the higher elevations. As I noted, the upper part of Parker Bench was yellow when we passed it on Friday. Frequently this area is green when we go to Millpond, but on the other hand I’ve seen the whole bench turning yellow at this time of year. The folks at Parcher’s Resort say it’s the earliest anyone can remember seeing color on some of the canyon walls, but I said, the color around North Lake and Lake Sabrina will probably peak in about a week (if the leaves weren’t adversely affected by the cold), putting the peak right around the end of September, which isn’t really early at all for this area.

Meanwhile, the aspens at middle and lower elevations are still dark green, as they should be in September. Perhaps they’ll start turning early as well, but what happens with the higher-elevation aspens is not necessarily a predictor of what will happen with the lower-elevation trees. If you have your heart set on photographing the color around North Lake or Lake Sabrina then you should definitely go soon, like this weekend, or maybe the next, but the eastern-Sierra aspen show will last for another month as the colors move down the slopes. In areas like the June Lake Loop and Lee Vining Canyon the peak color doesn’t usually arrive until the third or fourth week of October.

In Yosemite Valley, the fall color is usually even later, like around the end of October or beginning of November. An article I wrote several years ago outlines the timing and locations for the typical fall color progression in the central Sierra. My Photographer’s Guide to Yosemite book and iPhone app give more detail about the best locations to photograph colorful leaves in and around Yosemite.

I’ll let you know what I see and hear during the coming weeks, but here are some other resources to help you keep up with the latest fall-color developments:

What a great time of year, and it’s just beginning! 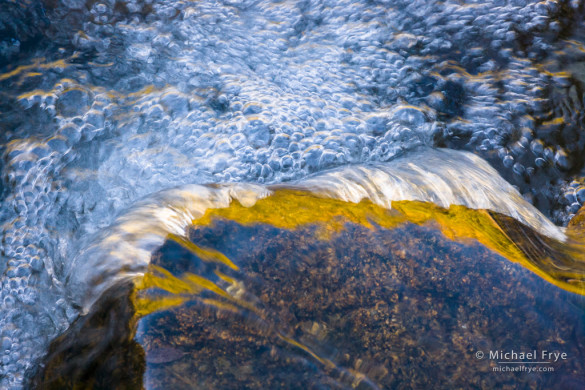