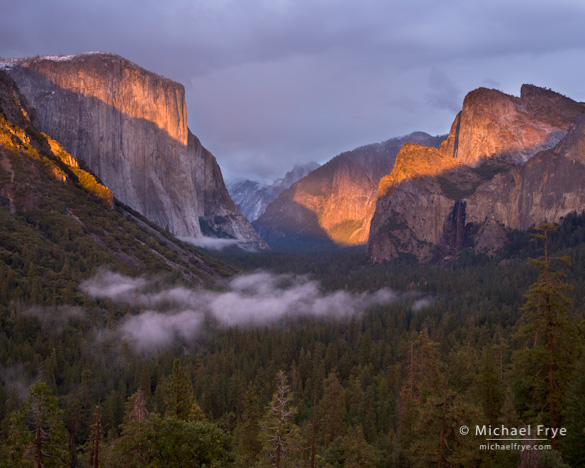 October is such a great month for photography in the Sierra Nevada. The leaves are changing color, and the light is changing too as the sun shifts from it’s high summer position to the lower, more interesting angles of winter.

Early October is a perfect time to photograph two of Yosemite’s classic views—Tunnel View and Gates of the Valley. In summer, from either of these spots, the late-day sun illuminates Cathedral Rocks on the right, but not El Capitan on the left. In winter it’s the opposite—sunset light strikes El Capitan, but not Cathedral Rocks. But for about two weeks in early October and early March both these rock formations get hit by the late-afternoon sun, so the light is evenly balanced. This image from Tunnel View, made on October 4th, 2009, shows that balanced illumination.

Of course the biggest show of the month is put on by all those colorful autumn leaves. The aspens have already started turning on the east side of the mountains, and by the end of October the dogwoods, maples, cottonwoods, and oaks will be changing in Yosemite Valley. Last week I linked to an article that describes the typical progression of fall color in and around Yosemite, but here’s another link in case you missed it.

Happy October! I hope you all have a wonderful month.