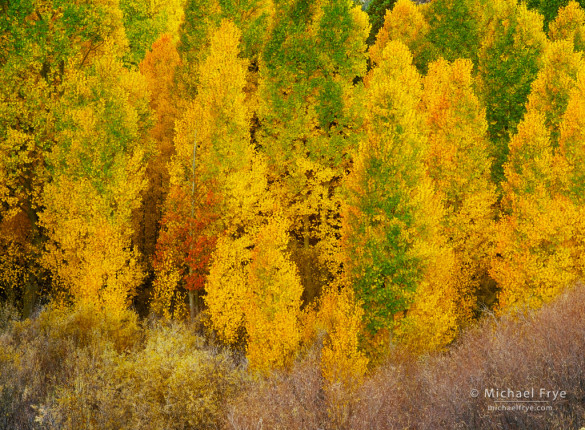 Claudia and I just returned from our annual trip to the Millpond Music Festival and (as Joe Craven puts it) “consciousness-raising event.” We had a wonderful time, as usual. The festival may or may not have raised my consciousness, but it sure was relaxing and fun.

Since the festival takes place in Bishop, on the eastern side of the Sierra Nevada, the trip gives me a chance to check on the early fall color over there. Every year, it seems, some early-changing leaves lead to online predictions that the aspens will turn early. This year I’ve also heard a lot of speculation about the effect the drought will have on the autumn color, and even seen a few actual reports of aspens turning brown and dropping their leaves early.

Driving down to Bishop last Friday, the color didn’t look early at all. There were some yellow and lime-green aspens at the mouth of Warren Canyon (along Highway 120 in upper Lee Vining Canyon), and some lime-green trees on Parker Bench, but everything else looked dark green. Warren Canyon and Parker Bench are both high-elevation, early-changing locations, so that all looked pretty typical for this time of year.

Yesterday I drove up to North Lake and Lake Sabrina, west of Bishop. These are also high-elevation areas, and there was more color up there, but again it all looked right on schedule. The aspens around North Lake were mostly green, with some lime green and yellow on the slope above the north shore of the lake. There was more color among small aspens along the road just before the lake, and along the main road (Highway 168) near the turnoff to North Lake. At Lake Sabrina I saw a lot of orange color among the scrubby aspens above the lake, but although there was more water than last year, there’s still a large, unattractive bathtub ring around the lake (actually a reservoir). The groves between the turnoff to North Lake and Lake Sabrina were still mostly green, as were the trees around Aspendell. Overall the color looked about a week behind last year, which means it’s on a pretty typical schedule, since last year everything turned about a week early.

I also drove up Rock Creek Canyon yesterday. While North Lake and Lake Sabrina are just above 9,000 feet in elevation, the road up this canyon climbs up to over 10,000 feet, so it’s one of the best places to see early fall color on the east side. Once again, there was some color up there, but not as much as last year at around the same time. Here’s a photograph from upper Rock Creek Canyon, made on September 22nd, 2014. Yesterday this same group of aspens was green and lime green, with a bit of yellow (I didn’t take any photos, as it was a quick visit, and the color wasn’t great). So it looks like the color in Rock Creek Canyon is a bit behind last year, which, again, puts it right on the typical schedule. 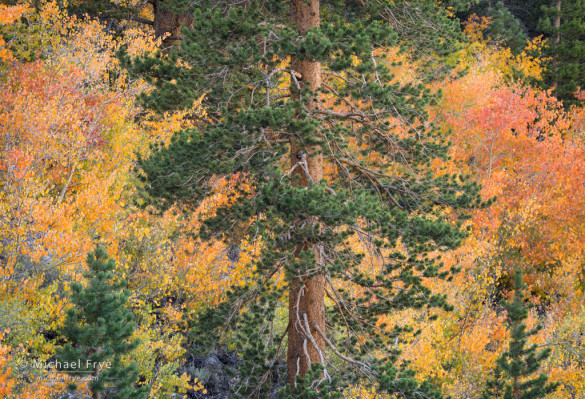 It’s still very early, of course, and the fall color progression can be affected by the weather over the next month. But so far the eastern-Sierra aspens don’t look early or late, just right on time. That means high-elevation groves, like the ones around North Lake, Lake Sabrina, and Rock Creek Canyon, will probably peak in another week or two, right around the end of September and beginning of October. The color will then move down the slopes, typically peaking in the lower-elevation groves around the third week of October.

The high-elevation trees tend to be smaller and scrubbier, and therefore less photogenic for medium- and close-range views. But the areas around North Lake and Lake Sabrina are great for mountain scenics with aspens in the foreground. The lower-elevation aspens are larger, with more of those big, beautiful white trunks these trees are famous for, so they make great subjects for more intimate scenes – and can also work well for larger landscapes with mountains in the background at certain locations. These lower-elevation, late-changing groves include some of my favorite eastern-Sierra aspen spots, like the June Lake Loop, Lee Vining Canyon, Convict Lake, and lower Lundy Canyon.

Signs of drought were hard to find. I saw a few aspens along the road at Crane Flat (in Yosemite) that had brown leaves, but didn’t see any other obvious indications of aspens stressed by the drought. Of course I only visited a few locations, and it’s possible that other groves have been adversely affected by the drought, but it doesn’t look like there’s widespread damage to the aspens.

So far it’s shaping up to be a typically beautiful autumn in the eastern Sierra. I’ll keep you posted about what I see and hear during the coming weeks, but here are some additional resources to help you keep up with the latest fall-color developments:

And also, if you’re hoping to photograph the eastern Sierra this fall, there’s a wonderful new resource available. G Dan Mitchell’s new book, California’s Fall Color: A Photographer’s Guide to Autumn in the Sierra, is full of great information about where and when to photograph the autumn foliage in California, and includes lots of Dan’s beautiful photographs for inspiration.