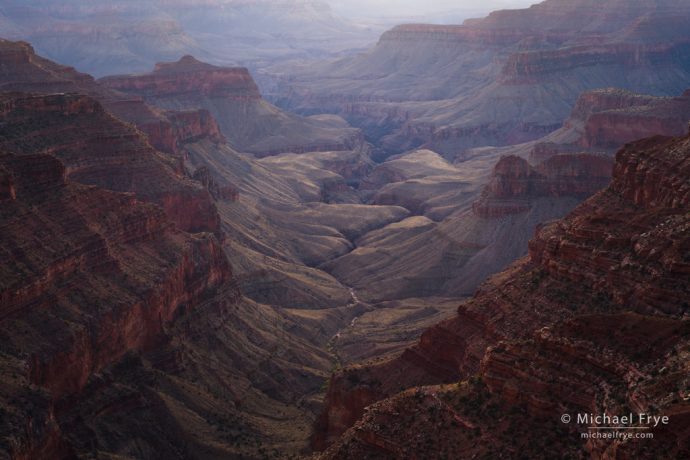 In a recent post I described how Claudia and I made a spur-of-the-moment detour to the North Rim of the Grand Canyon. We arrived in the afternoon, and spent the rest of the day checking out various viewpoints.

As sunset approached we had just enough light to check out one more spot. We made it there just after sunset, and in the gathering dusk I thought the light in the canyon to the west was exquisite: soft, with a beautiful backlit glow, and a slight haze to add atmosphere and depth.

My eye was drawn immediately to the repeating diagonals and V-shapes of the side canyon below me. It looked like a ready-made composition. I didn’t want to include the sky, because it was so much brighter than the land below, and that bright strip would pull the viewer’s eye up and away from what I wanted to emphasize: the land itself.

I made other photographs that evening, and the next morning. But this image remains one of my favorites from the trip. It’s hard to describe the mood of this photo: soft, maybe a little mysterious. But there’s a feeling to it that I like.

And that’s really what I was attracted to. I saw a composition I thought would work, but more importantly, I recognized a combination of elements – light, color, atmosphere, and composition – that could convey a feeling.

Over the years I’ve tried to hone my ability to recognize scenes that could convey a mood or feeling. It starts by looking for combinations of light, weather, and subject that might go beyond showing what a place looks like, and capture a little bit of what it feels like to be there. I also try to look inward as well as outward; to tune in to how I feel, or how the light, weather, and place make me feel at that moment. Then I look for visual elements that might help convey that feeling.

I don’t want to over-analyze this. It’s an intuitive process, not an intellectual one. If something speaks to me I listen.

Sometimes I’ll sense that a scene has the potential to convey a mood, but not see immediately how to do that. Then I keep looking, and exploring, until something clicks. Or not. I don’t always find a solution.

In this case I saw the composition right away. Everything clicked in my mind and imagination immediately, and I instantly visualized how I wanted the image to look. That doesn’t happen often, but it’s nice when it does.