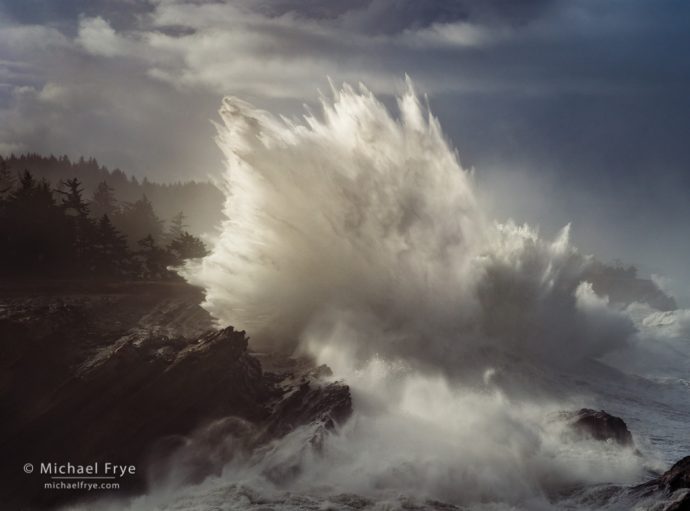 Crashing wave, Oregon Coast. To get a sense of scale, click on the image to view it larger and see if you can spot the person in the frame. He’s just to the left of the wave between some trees. It looks like the wave would have soaked this photographer, but it probably didn’t; the wave is actually between that person and the camera, and the spot he was standing on usually stays dry. This wasn’t the tallest splash we saw that day, but the light at that moment, along with the shape of the wave, made this image the clear winner in my mind. 50mm, 1/500th of a second at f/11, ISO 160.

After spending some time along the Oregon Coast, Claudia and I headed up to Bellingham, Washington, to visit family.

But I kept my eye on the weather forecasts for Oregon. One day stood out in particular, when waves were predicted to reach heights of 20 feet or more. We planned to work our way back to Oregon in time to see those waves.

As the day approached, the wave prediction dropped a bit, to about 15 to 16 feet, but that was still more than big enough. The National Weather Service issued a high surf warning for portions of the Oregon Coast.

Waves like that can be dangerous, so we headed to a familiar spot where we could safely photograph the waves crashing ashore from the top of a 50-foot bluff.

On the morning of the forecasted big-wave day I reached the shore before sunrise. It was cloudy, with off-and-on rain showers lingering from the previous night’s storm. Since it didn’t look like the sun would break through soon I explored a point I hadn’t been to before. Along the way I got caught in a brief downpour, but had good rain gear and stayed nice and dry. After two weeks in the Northwest we were used to the rain and the muddy, slippery trails.

Then I worked my way to another point, an area known for being a good spot to see big waves. We’d been there about 10 days before and watched 13-foot waves crashing against the rocks, which was quite impressive. I could see that the waves were even bigger on this day. 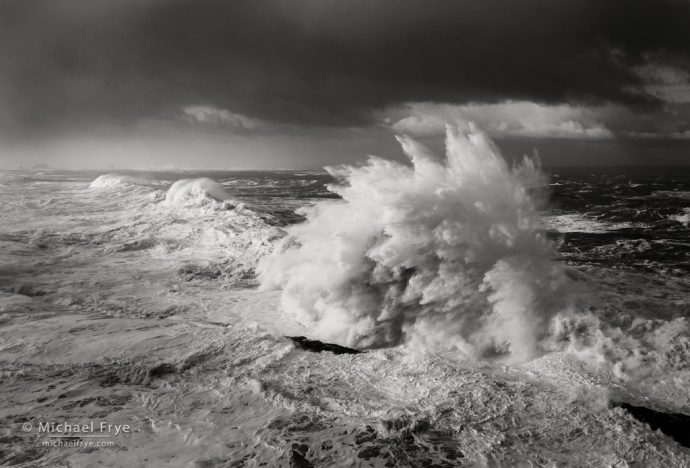 Waves and storm clouds, Oregon Coast. With my big camera pointed at the scene shown above, I used my iPhone to quickly capture this view as a big set of waves approached. 5.1mm (equivalent to about 26mm), 1/3000th/sec. at f/1.6, ISO 32.

I got to my favorite spot just as the sun broke through. Over the next hour the conditions were nearly perfect, with huge waves, and the sun occasionally breaking through the clouds and fog to backlight the water.

Photographing a dynamic landscape like this is similar to photographing sports, or wildlife. You’re trying to capture certain moments, and you have to take – and subsequently throw out – a lot of frames in order to catch those moments. I took around 2,000 photographs that day, but only a handful of those stood out.

I tried to keep my shutter speed up to at least 1/250th of a second to freeze the motion of the water, and used a pretty wide lens (50mm). Previous experience had shown me that with a longer lens the very biggest wave splashes could go off the top of the frame, so I reasoned that it was better to use a wider lens, and crop if necessary, than to cut off the top of the wave.

That’s my philosophy whenever I’m photographing dynamic, fast-changing subjects, including wildlife. My camera has 42 megapixels, so I can crop a bit and still get good resolution. I’d rather go a little too wide, and maybe have to crop, then zoom in too tightly and end up cutting off something important, like an animal’s feet, the tips of a bird’s wings – or the top of a big wave.

Claudia, Rider and I spent the whole day by the shore photographing waves, and stayed for the sunset. Watching those huge waves rolling in off the Pacific was an unforgettable experience. The power and energy was immense, the roar of the surf deafening. We felt simultaneously exhilarated, awestruck, and humbled. What a fantastic day. 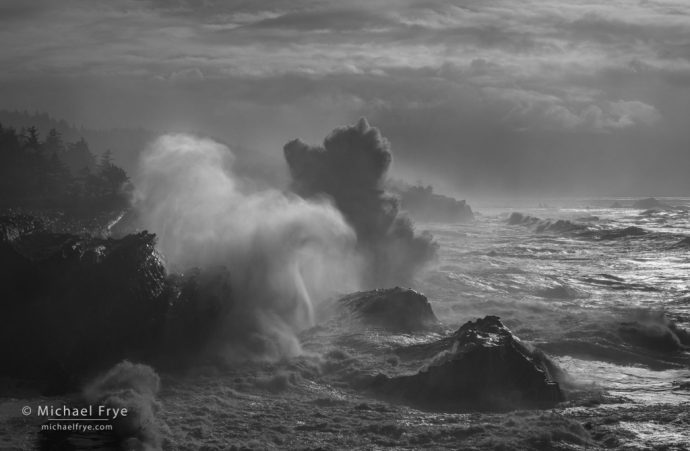 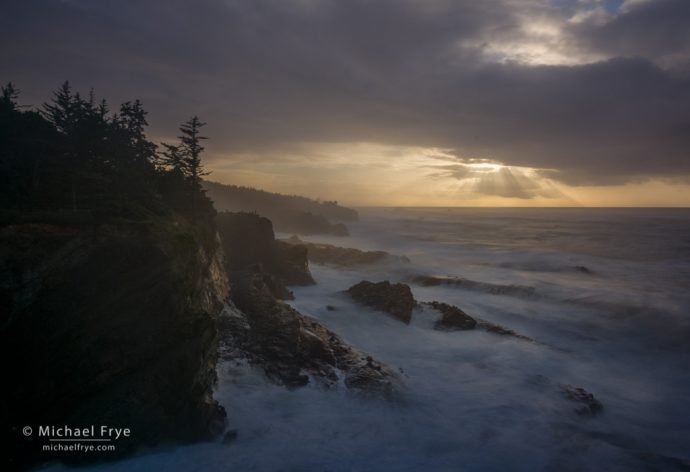 Claudia captured this video of me photographing the waves – while Rider relaxes: