Exploring the Oregon Coast: Part One 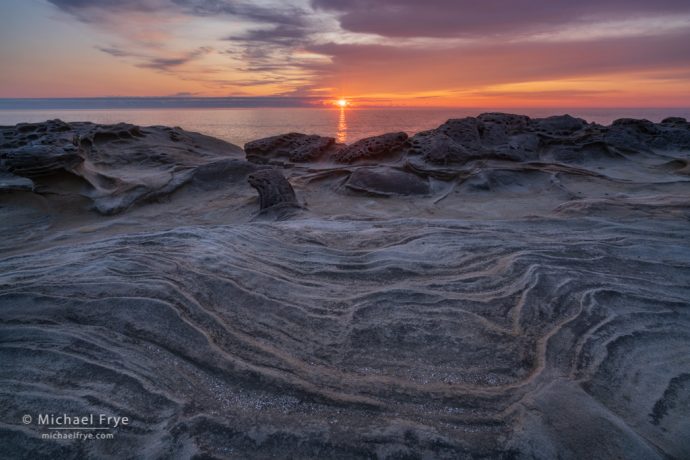 Sunset and sandstone formations, Oregon coast. 16mm, five bracketed exposures at f/16, ISO 100, blended with Lightroom’s HDR Merge, then blended back with one of the original images in Photoshop to eliminate ghosting.

Recently Claudia and I visited our friends Gary and Charlotte Gibb up near Mt. Shasta, where they were renting a house for the week. We had a great time hanging out with them for a couple of days. And then we thought, we’re so close, maybe we should visit the Oregon coast. So we did.

I’ve never spent much time along the Oregon coast, but it’s a beautiful area, and a popular photography destination for a reason, so it’s one of those places that I’ve wanted to explore more thoroughly.

Photographing an area I’m unfamiliar with always presents a challenge. Our friend G Dan Mitchell doesn’t do any research when visiting a new location, because he doesn’t want to be influenced by what other photographers have done, or haven’t done. I understand that, and I might try that approach sometime if I have plenty of time to explore. But in this case we only had a few days, and chances for good sunsets on a couple of them, so I did some online research to find interesting locations to photograph during our short visit.

On our last evening we ended up at a spot known for its unusual sandstone formations. Apparently Minor White used to take students there to practice composition, and I could see why, as the patterns and forms of the rock were striking. We got there a couple of hours before dark, so I had time to photograph just the rocks, while also keeping an eye out for interesting foregrounds in case we got a good sunset.

That last part was a challenge, because the best views of the rocks were looking north and south, parallel to the sandstone strata, rather than west toward the sunset. The foreground I liked best is the one shown at the top of this post, with the curving rock ridges framing the ocean and the setting sun. I used my widest lens (16mm), and got the tripod down low fill up most of the frame with that foreground (but not too low, or the rocks would have merged with the horizon line of the water).

Although I like that photograph, sometimes it’s better to keep things simple and stick to one subject at a time, rather than trying to juxtapose two dissimilar elements (like unusual rocks and a pretty sunset). So I also used a longer lens to capture just the ocean, sun, and clouds: 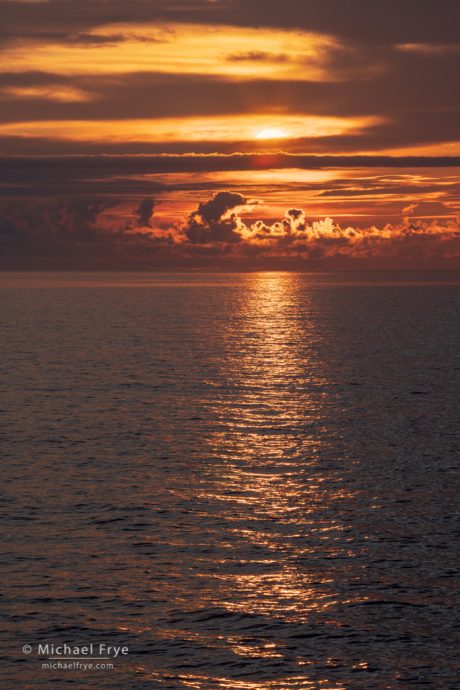 And earlier I concentrated on photographing the patterns in the rocks, as shown in the images below.

It was a quick trip, but lots of fun. I’ll post some more photographs from Oregon soon. 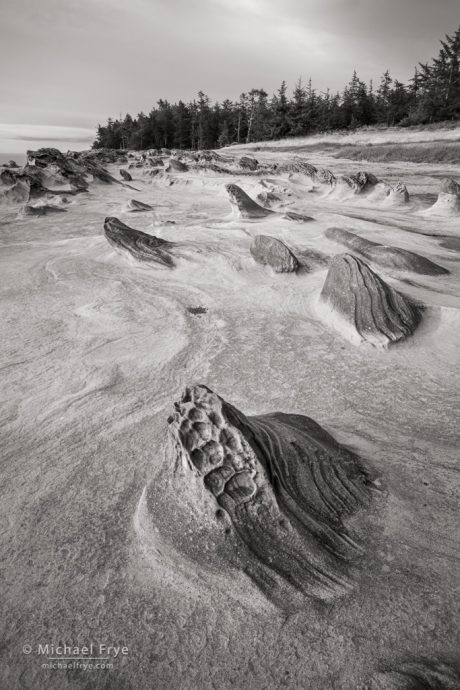 Sandstone formations, Oregon coast. I wanted this photograph to be about forms, patterns, and textures. The color – blue sky and golden rocks – was just a distraction, so it worked much better in black and white. 23mm, 1/8 sec. at f/16, ISO 100. 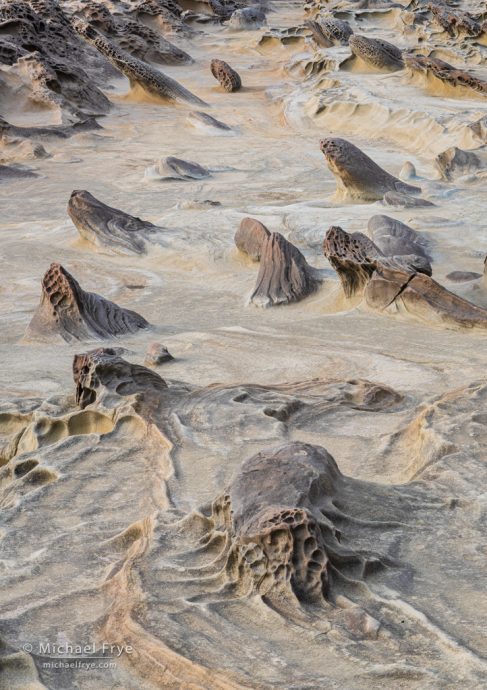 Sandstone formations, Oregon coast. This composition jumped out at me immediately, and was the first image I made at this location. I focus-stacked five frames and blended them with Helicon Focus to get everything in focus. 87mm, 1/15 sec. at f/16, ISO 100.

Related Posts: When a Scene Composes Itself; Stretching