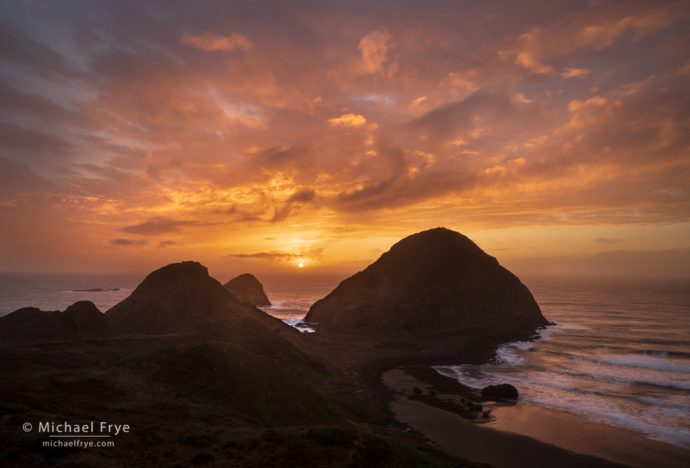 Claudia and I have been on the road again. We made our way up the Oregon Coast, then to Bellingham, Washington, to visit family, then back to Oregon again.

We’ve been enjoying some wild weather along the coast. While California has been mostly dry, we’ve encountered clouds, rain, fog, wind, and big waves – all fun stuff for a landscape photographer, despite sometimes having to dodge sheets of rain blowing sideways.

One afternoon, while driving along the coast, we saw some beautiful, low-lying fog, and then spotted rock formations poking up out of that fog. I loved this scene; it felt like I’d been transported to Scotland, or into the game Myst.

I framed a number of different compositions as the fog shifted, and a bit of color appeared in the clouds. Then I waited to see if the sun might break through at sunset. It never did, but I didn’t mind, as I liked the soft look and feeling with just fog, clouds, and pastel colors: 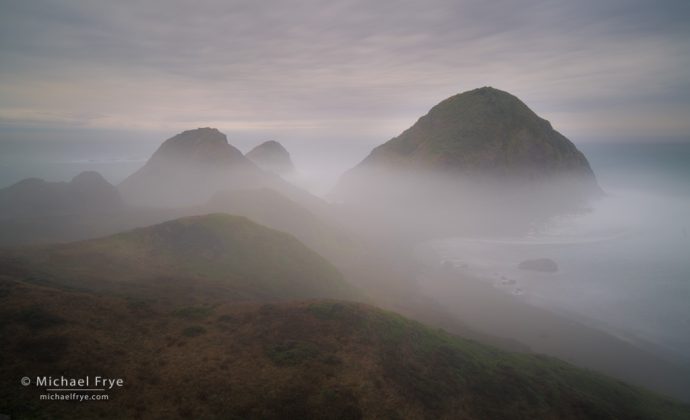 While I was there I had the presence of mind to look at PhotoPills and see where the sun would set in relation to those rock formations – if the sun was visible. As it turned out, at that time of year it sets in a perfect spot, right between the rocks.

A few days later we followed our noses, moving away from some rain squalls. We encountered more fog, and I thought, hmm, maybe that same spot might be worth looking at again.

When we arrived we didn’t find any fog, but there was a thin strip of clear sky out to the west, near the horizon. The left (south) end of that strip lined up between the rocks. Since all the clouds were moving from south to north, I thought that strip of clear sky would soon move off to the north and disappear. But it lingered, and kept lingering, so maybe, just maybe, the sun could slip into that crack in the clouds just before it set. The odds of that happening looked pretty slim, but it seemed worth waiting to find out.

Defying the odds, that strip of clear sky stayed around, and the sun broke through and lit up the clouds (the photo at the top of this post). It’s probably the most brilliant sunset we’ve seen on this trip.

Despite similar compositions, the two photos here have very different moods: one soft and mysterious, the other more dramatic. I like them both, for different reasons, and I thought it was a pretty interesting example of how weather can influence the look and feeling of an image.

Home is beckoning, but we’ve had a great trip, and I’ll share some more images from Oregon soon.