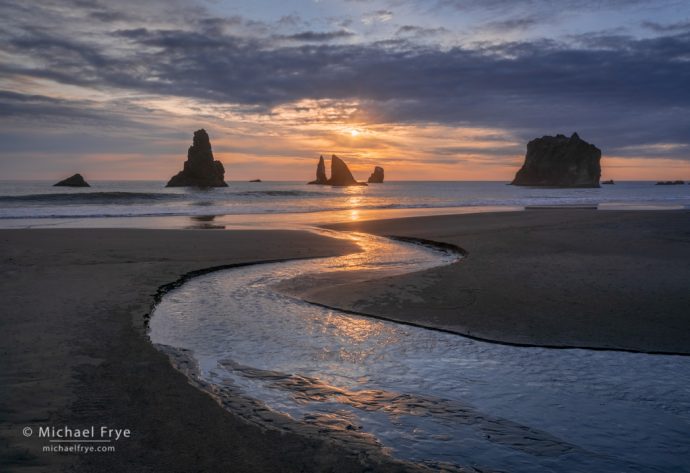 Creek flowing into the Pacific Ocean, Oregon coast. 26mm, five bracketed exposures at f/16, ISO 100, blended with Lightroom’s HDR Merge, then blended back with one of the original images in Photoshop to eliminate ghosting.

Summer is fog season along the west coast. Currents and upwelling bring cool water to the surface near the shore, and when warm, moist air blowing off the Pacific encounters that cold water the air temperature near the surface drops to meet the dew point, creating the right conditions for fog formation.

Usually that fog layer lifts above sea level, so along the shore it looks like a low overcast. That stratus deck might break up late in the morning, but often starts to re-form toward sunset, building back into a solid overcast by morning.

If you can gain some elevation you can get into the fog, which works well for forest scenes like redwoods. But the lingering coastal stratus often mutes the sunrises and sunsets along the coast, which is why fall, winter, and spring are usually better seasons for photographing coastal scenes.

But this hasn’t been a typical summer – at least not in Oregon and Washington. Low-pressure systems have been parading through the region, bringing frequent and unusual (for summer) showers, mixing up the atmosphere, and disrupting the persistent coastal fog.

So even though it was August, we had three good sunsets on our brief journey to the Oregon coast. Our first day featured a typical summer stratus layer, with a featureless overcast stretching from one horizon to the other. But late in the afternoon a gap appeared in that cloud layer along the western horizon, and sunlight poured through that gap for a few brief minutes just before sunset: 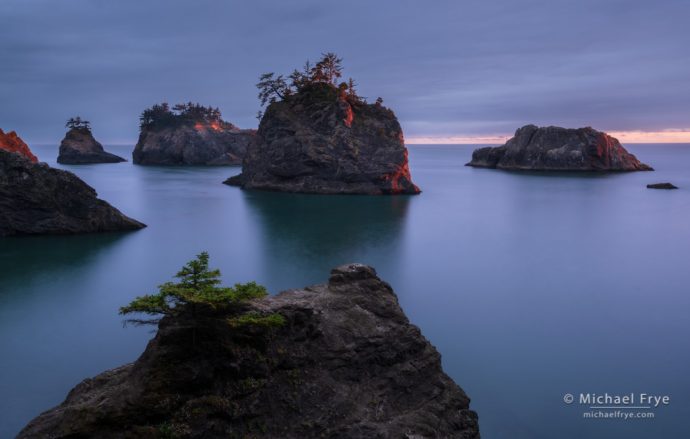 Then one of those low-pressure systems reached the Northwest. This system eventually brought some raucous thunderstorms to northern California and southern Oregon, but before that it broke up the stratus layer, and ushered in an array of patchy, mid- to high-level clouds – just the right kind of clouds for interesting sunsets. I showed photos of one of those sunsets in this previous post, and you can see views of another in this post.

If you have to plan a trip far in advance, it pays to look at the climate and weather data and time your visit for a period that gives you good odds of getting the right weather – whatever that might be. For a particularly rainy place, like the west coast of New Zealand, or the Olympic peninsula, you might want to visit during one of the drier seasons, so you have a chance of seeing the sun. For a dry area, like southern Utah, you could plan your trip for a wetter season, when you might actually find some clouds in the sky. (Unless you’re photographing slot canyons, when you want the sun!) For redwoods the summer fog season is perfect.

But you can also keep an eye on the weather at locations near your home, and make a spur-of-the-moment trip when conditions look promising. And once you’re there, whether on a trip planned in advance, or on a last-minute venture, you have to adapt to the weather you get, even when it’s not what you hoped for.

It’s always a good idea to have a Plan B. The more options and flexibility you can build into your plans the better. If it had been foggy during our visit to Oregon we would have driven south into the northern-California redwoods. But since the cloud forecasts indicated promising conditions for sunsets, we opted for the Oregon coast. It’s nice to have such great choices within a relatively small area.

If you’re in Utah during the monsoon season, hoping for thunderstorms, but you find endless blue skies, you can always head for the canyons, where reflected sunlight is perfect. And I’ll often try to plan a trip around the moon or stars, so if the days are relentlessly sunny then I might be able to photograph a moonrise or moonset, or the Milky Way.

In other words, give yourself options, and be flexible. 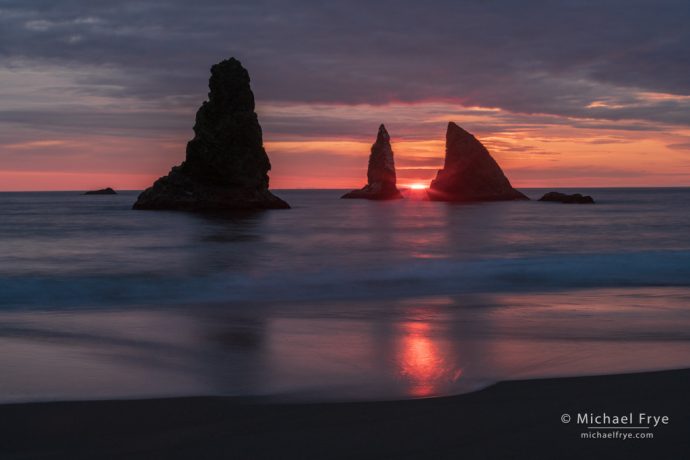 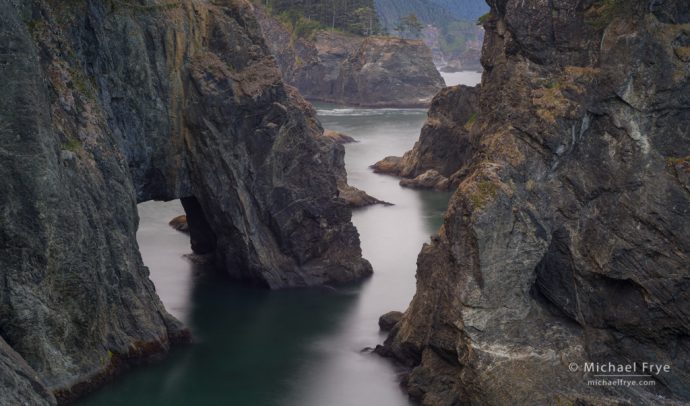