Old truck and shed underneath the Milky Way, Bodie. Nighttime photography can get pretty complex, often requiring multiple frames to reduce noise, or create intricate lighting. Here I captured twelve frames of the Milky Way, and blended them together with Starry Landscape Stacker to reduce noise. Then I took that image into Photoshop, where I blended it with seven light-painting frames – the truck from two sides, the shed from two sides, a frame for the interior lights (small lights placed inside the shed and against the truck windows), and two frames for lighting the headlights.

On Thursday I had an opportunity to photograph Bodie at night. I’ve done that many times before, but always while leading a workshop group. This time I joined a small group of photographers on my friend Rick Whitacre‘s permit, and the five of us had this amazing ghost town to ourselves for an evening.

It’s always fun leading a group in Bodie, but it was nice, for a change, to just concentrate on my own photography. I had a mental checklist of images I hadn’t been able to try yet, and this was the perfect chance to do that. We also had a couple hours of daylight to scout, and I found several new possibilities. The most intriguing of these, to me, was a star-trail image of wagons in an old barn, which I ended up trying – it’s the first image below.

Even though our permit allowed us to be in Bodie from 6:00 p.m. to 1:00 a.m., it didn’t get completely dark until about 9:45. That left slightly more than three hours for night photography, and that time flew by. I had two cameras and two tripods, so I could capture a star-trail sequence with one camera, while simultaneously making Milky Way and pinpoint-star images with the other camera. But even so, night photography is a slow process, and I was only able to make four images.

But I was happy with the images I made. One of the reasons I enjoy photographing Bodie at night so much is that the subjects lend themselves to intricate, imaginative lighting. You can shine lights through windows, or stick them inside open buildings (like barns), to create the appearance of lights shining inside a long-abandoned building or vehicle. You can trace a flashlight over an intricate Bodie subject to highlight its features. Photography is all about light, and we’re usually capturing the light that nature gives us. But with this kind of nighttime photography you can, as a photographer, go from merely capturing images to actually creating them.

I’ll be back in Bodie at the end of this month teaching a nighttime landscape workshop, and assisting Robert Eckhardt’s iPhone workshop, where we’ll photograph Bodie interiors during the daytime. I know both classes will be lots of fun, so I can’t wait! 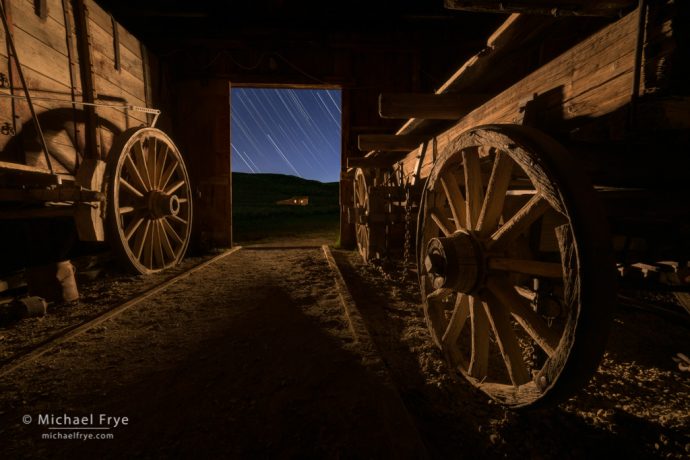 Wagons and star trails, Bodie. A star-trail sequence like this gets even more complicated! The star trails themselves were captured in 31 separate frames, each 4 minutes at f/5.6, ISO 1600. These were assembled in Photoshop with the Lighten blending mode. Then I added the light-painting frames – two for the barn interior, and three for the distant house. 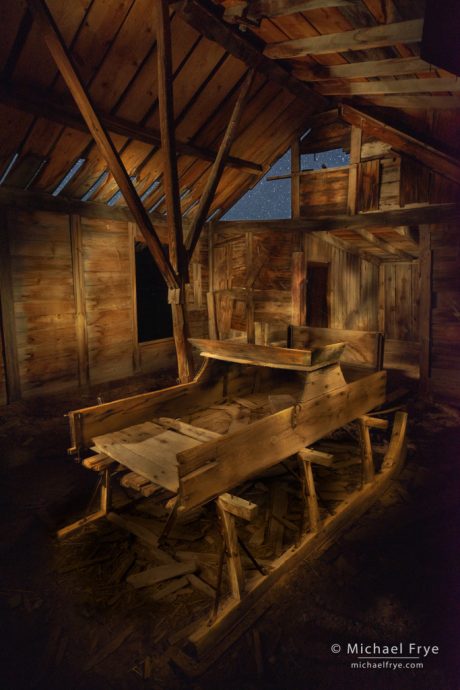 Sleigh, shed, and stars, Bodie. One image for the stars, then three frames for lighting the sleigh and interior of the shed. For the light-painting I used a small flashlight, stepped into the frame, and moved continuously so that my figure wouldn’t be visible, and to create a deliberately uneven, modulated lighting effect. 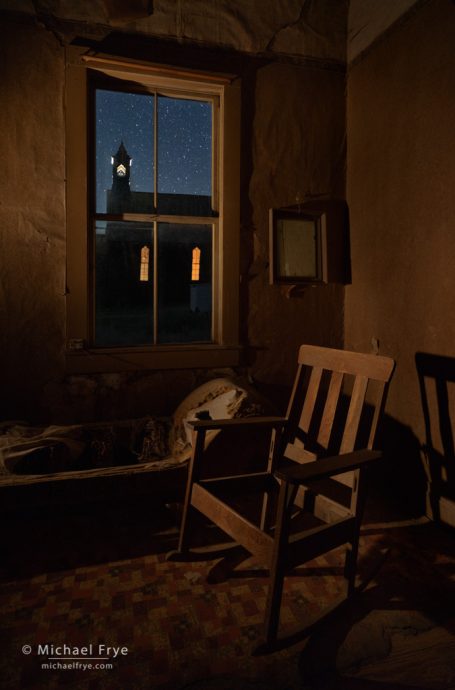 View of the church, Bodie. This image required only two frames – one for the stars and church, and another for the interior lighting. Rick had set up a couple of small lights to illuminate the church windows, and then used a strong flashlight to highlight the steeple.