Wagon wheel behind the Dechambeau Hotel, Bodie. I loved this wagon wheel poking out of the ground, and worked with one of our participants, Jeff, to light this scene. We started with an exposure for the sky, then lit the wagon wheel, getting close with a flashlight outfitted with a homemade snoot to try to light only the rim and spokes. Then Jeff lit the shed on the right from two different angles, and I lit the two-story buildings from both sides.

As promised, here are a few photos from the nighttime sessions during our recent Bodie, Inside and Out workshop.

The lighting for each of these photographs was rather complex, and required blending several exposures together. In each case I started with a frame for the sky (my standard pinpoint-star exposure: 15 seconds at f/2.8, 6400 ISO), then used separate frames (at lower ISOs and smaller apertures) to light different aspects of the scene. As I’ve described before, the individual exposures were blended together in Photoshop using the Lighten blending mode, and sometimes adding layer masks to hide stray light.

Often in a nighttime workshop like this several people work on a group project at the same time, exchanging ideas about how to light the subject, and taking turns doing some of the lighting. That group synergy can be helpful, as those ideas can add a lot to the final image; for example, with the photograph below of the blue truck (a 1927 Dodge Graham), before we started I asked the group how they might light it, and someone suggested putting a light behind the two glass tanks at the top of the gas pumps. Great idea!

I’ve included extended captions to give more details about how each image was made. Making these photographs was complex, but also tremendous fun. Adding your own light to a nighttime scene can completely transform it, and when it works can be very creatively satisfying. 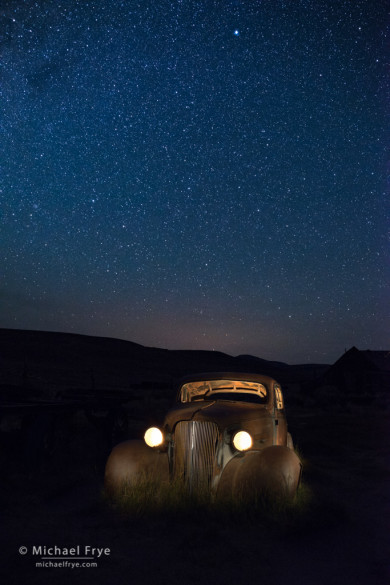 1937 Chevy at night, Bodie. The rusting shell of this Chevy makes a great subject. Photographing this was another group project, with lots of creative input from everyone. We lit the exterior from several angles, then lit the headlights and interior. We also stuck a flashlight behind the grill, but I didn’t end up using that frame in my final image. Finally I painted the exterior of the car continuously with a flashlight to create modulated lighting, which I used for the main lighting on the car in this final version.

1927 Dodge Graham with gas pumps at night, Bodie. Several of us took turns lighting this scene. As I said above, one of the participants had the idea of putting a light behind the glass containers at the top of the gas pumps. We also lit the inside of the cab, and illuminated the truck from several different angles, but the main light in my final version here was from a continuously-moving flashlight close to the truck. A thick afternoon cloud cover dissipated quickly after sunset that night, but a few lingering clouds added some interest to the sky.

Related Posts: Inside Bodie; Under the Stars