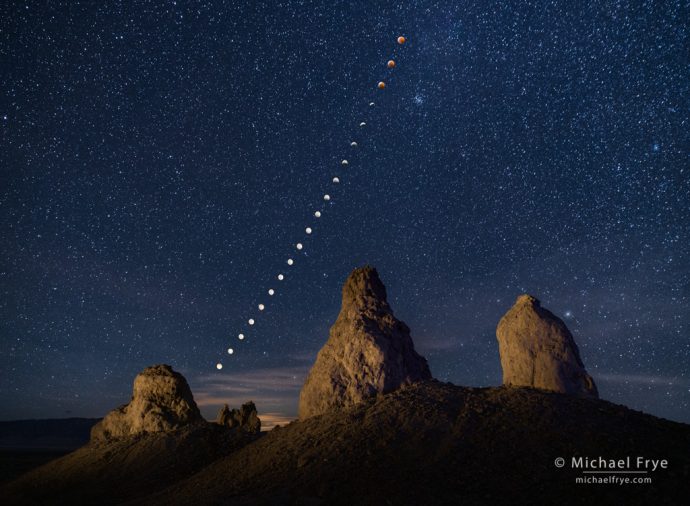 The weather forecasts prior to last Sunday’s lunar eclipse showed lots of clouds over the western U.S. Lots of clouds. On Thursday before the eclipse it looked like we might possibly find clear skies in southern Arizona, or around Death Valley, but the chances for either location looked slim.

By Saturday it appeared that southern Arizona would probably be covered in clouds at eclipse time. Yet computer models for the evening of the eclipse kept showing a small slot of clear sky extending from about Lancaster, California (in the desert north of Los Angeles) northeast through the Trona Pinnacles, Death Valley, and continuing into Nevada and Utah. I couldn’t think of anything in Nevada to use as a foreground, but Death Valley or the Trona Pinnacles could certainly work.

Claudia and I headed in that direction, and spent Saturday night in Independence, on the eastern side of the Sierra near Lone Pine. After photographing sunrise at the Alabama Hills the next morning I looked at the weather forecasts one more time, and had to make a decision. In the end I opted for the Trona Pinnacles, as there appeared to be a slightly higher chance of clouds in Death Valley, and good foregrounds abound at Trona.

The weather didn’t look very promising that afternoon. The wind was picking up, and as I scouted for suitable locations among the pinnacles the skies were covered with high clouds: 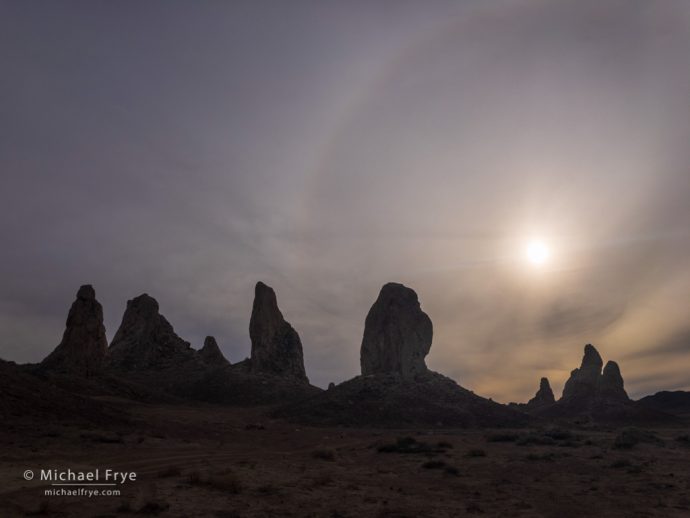 But I could see blue sky off to the north, moving our way. Some lingering clouds created a nice sunset, and by the time I started my eclipse sequence we could see only a few strands of high clouds overhead.

I had found a spot where I could look east, toward where the eclipsed moon would be, with three nicely-spaced pinnacles in the foreground. Somehow my daytime calculations about the position of the moon were a little off, but it was easy to adjust my camera position slightly in order to put the rising moon between the first and second pinnacles.

I made my first exposure for the moon at 5:45 p.m., and continued capturing images of the moon every ten minutes as it rose high above the pinnacles. I kept this sequence going until 8:55, when the moon was totally eclipsed. The wind blew pretty hard the whole time, but luckily my camera position was somewhat sheltered by another pinnacle, so I stayed reasonably warm and didn’t have to worry about my tripod blowing over.

After completing the moon sequence I made some exposures for the stars, and finally, with Claudia’s help, light-painted the pinnacles. All 23 frames – 20 for the moons, one for the stars, and two light-painting images – were combined in Photoshop using the Lighten blending mode. And although this is obviously a composite, I never changed lenses or moved the camera during the sequence in an attempt to make the moons larger, or create a juxtaposition between the moon and pinnacles that didn’t really exist.

Here’s a video showing a satellite view of the clouds over the western U.S. during the eclipse last Sunday. The mouse cursor shows our approximate location in the Trona Pinnacles. The time frame shown in these satellite images extends from 3:00 p.m. to 9:00 p.m. Pacific Time:

As you can see, the skies cleared over Trona during the exact window of time required to photograph the eclipse sequence. The large band of high clouds that covered the sky that afternoon glided off to the southeast toward Arizona, while another batch of clouds moving in from the northwest didn’t reach us until after totality. We could see those approaching clouds as we drove away from the Pinnacles and headed toward Lone Pine.

Thin clouds made the moon slightly hazy in a couple of the early frames of the sequence, but you can hardly tell in the final image. In short, I was really, really lucky that I was able to capture this image.

More importantly, Claudia and I got to view the eclipse. I’ve seen about half a dozen total lunar eclipses now, and each time is a special experience. At first it’s just a bright, moonlit night. Then the moon dims slightly. Then it dims a little more. Then it gets really dark, and thousands of stars pop out. Where earlier it was easy to walk around with just the moonlight for illumination, it’s suddenly pitch dark and you have to fish out your headlamp. And last Sunday the other-worldly, lunar landscape of the Trona Pinnacles added just the right mood to the occasion.

Despite the cold wind, we really enjoyed this eclipse. We won’t get to see another total lunar eclipse until May of 2021, so I’ll have to savor the memories of this one for awhile.