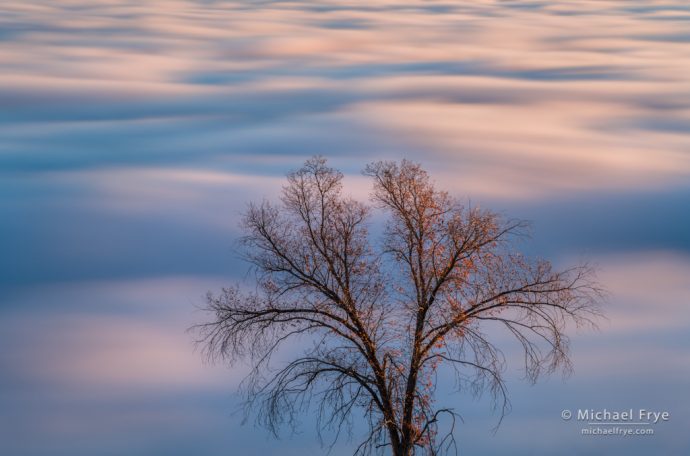 Fog in California’s Central Valley will occasionally lift into what meteorologists call a stratus deck, where fog rises above the valley floor and settles into a low layer of clouds. From the floor of the Central Valley it looks like a low overcast, but if you drive into the Sierra foothills you’ll climb into the fog, and then above it.

If you’ve been reading this blog for awhile you know that I love fog. It’s highly photogenic stuff. Fog here in the foothills is much less common than in the Central Valley, so it always piques my interest, giving me a rare opportunity to photograph some of the numerous, beautiful, foothill oaks in the fog, and even better, a chance to get above the fog. If conditions are right, I can sometimes climb a peak or ridge where I can look out over a sea of fog, with the peaks of the Sierra to the east, and nothing visible in any other direction except the cloud tops.

We had the right conditions for that about ten days ago. The stratus deck was high, above our house at 2,800 feet. I rose before dawn and headed up one of the taller mountains in the area, hoping to get above the clouds. I drove through a thin layer of fog and then emerged above the clouds, with a sea of fog spread out below.

Those of you who live in the San Francisco Bay Area (and many other places along the California coast) know this sight well. But if you’ve never looked out over a fog layer it’s hard to describe how cool it is. It’s like being in a plane, except that you’re standing on the ground, on an island in the sky. You feel a little sorry for all the poor folks who are trapped underneath the fog, while you’re high above them in this hidden, magical realm above the clouds.

After some brief scouting I made several compositions in the pre-dawn light. Then, just as the sun crested the mountains to the east, I found the oak tree shown in the photograph above. The tree had a beautiful shape, and if I positioned myself in just the right spot I could frame the oak with nothing but cloud-tops behind it, making a simple, clean composition. I could have included some of the mountains that were just beyond the top of the frame, but they didn’t look very interesting by then – just forested hills with blue sky above. Besides, I liked the simplicity of showing just the oak against the clouds, and the slightly disorienting feeling of seeing a tree floating above fog, with no other frame of reference.

I already had my seven-stop ND filter on the camera because I wanted to blur the movement of the clouds and make them look softer. They were actually moving quite quickly, marching by in a stately procession. I experimented with several different shutter speeds – 15 seconds, 20 seconds, 30 seconds – to find the right balance of softness and texture. For the composition above I settled on 20 seconds, and made a series of exposures at that shutter speed to capture different patterns of clouds.

I’ve made several more early-morning trips around the foothills recently, hoping to get above the stratus deck, or find trees in the fog. You can see some images from those trips below. Whether in it or above it, fog is really fun to photograph. 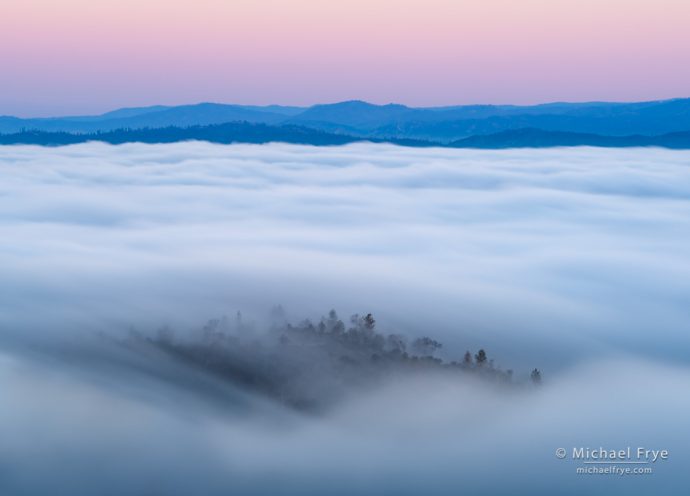 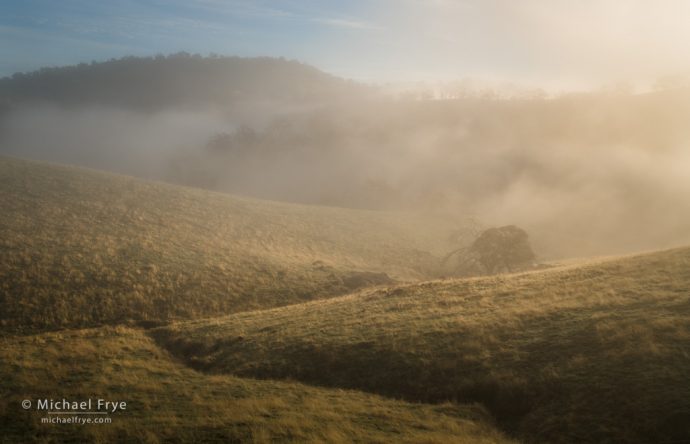 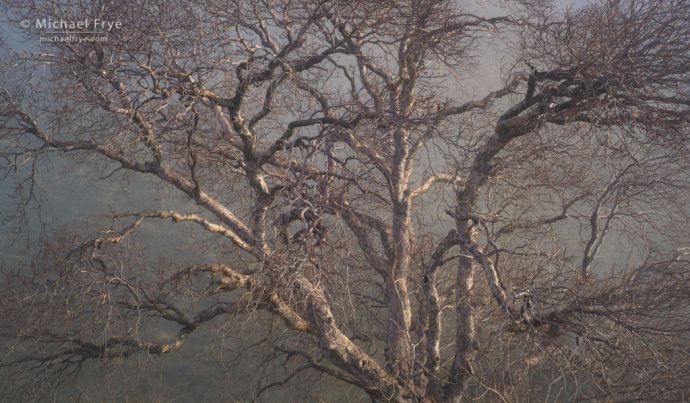 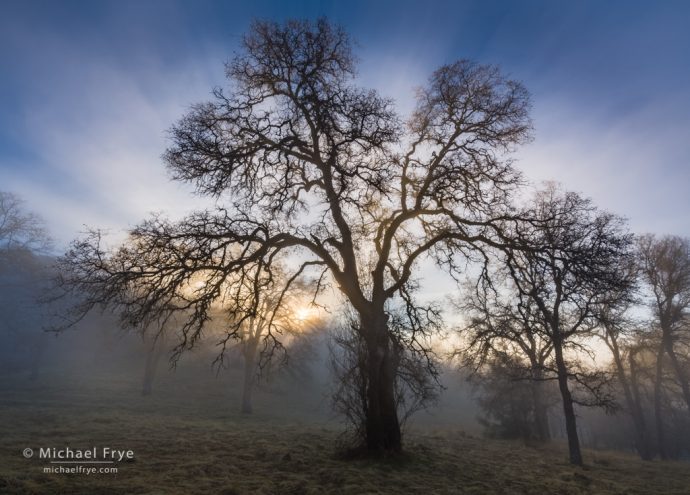