Death Valley under the Moon and Stars

Milky Way over sand dunes, Death Valley. This is a six-image panorama, lit with low-level continuous lighting from two LED light panels on stands, and stitched together with Lightroom’s Panorama Merge. See the main text for more details.

It’s been a busy spring, so I have a backlog of images that I haven’t been able to post yet. Among those images are most of the nighttime photos I made during our two Death Valley workshops (as well as beforehand, while scouting). We encountered a lot of wind, which made things challenging. You just don’t want to be out in the dunes when it’s windy, because you and your gear will get sand-blasted. But the wind helped wipe footprints off the sand, and somehow, during both workshops, we managed to get out into the footprint-free dunes on calm, clear, beautiful nights.

The panorama above was created by stitching together six separate frames. I turned the camera to a vertical orientation, with my 20mm Rokinon lens, to make sure I had enough vertical spacing to include the top of the Milky Way as well as the dunes below. When making panoramas, day or night, I always make sure I have at least a 50-percent overlap between frames. How do you see that in the dark? By picking out a bright star near the middle or edge of the frame. If, for example, I’m capturing the panorama sequence from left to right, I could find a star on the right edge of the frame in the first shot, then move that star to the middle of the frame for the next image. Or, I could find a star in the middle of the first frame, then move that star to the left edge for the second exposure.

We set up continuous, low-level lighting for this scene. I used two LED light panels with amber filters, and placed them on cheap, lightweight tripods. The main light was just out of the frame to the left, raking across the dunes. The second was actually behind the dune on the right, adding a bit of fill light to the right side of the dunes in the middle and on the left. I adjusted the light output of the LED panels to expose the dunes properly with typical Milky-Way settings on the camera – that is, 15 or 20 seconds at f/2.8 and 6400 ISO, or any equivalent exposure. (I actually used 20 seconds at f/2.5 at 5000 ISO for each image in my panorama.)

This kind of low-level lighting for nighttime photos has become increasingly popular over the last few years. Advocates point out that the light levels are low enough to allow people to keep their night vision, and don’t interfere with other people’s enjoyment of dark skies in popular places. On the other hand, “traditional” light painting with a hand-held flashlight has many practical and creative advantages over continuous, low-level lighting. There’s less equipment to buy and carry (just a flashlight, rather than multiple LED panels and stands). Light-painting also allows you to have more control over exactly what the light hits, and doesn’t hit. In addition, with a brighter light you can overpower the ambient light and do the lighting on separate frames, which gives you more control over the intensity and color of the lighting, and also makes it possible to light a scene from many different angles with just one light. And with a moving, hand-held flashlight you can actually step into the scene while lighting it, yet keep yourself and the flashlight invisible in the photograph, making many interesting creative effects possible. This image, for example, would never have been possible with light panels on stands – nor would I have been able to make this one.

But it’s very difficult to light the foreground of a panorama with a hand-held flashlight. You’d have to light the scene the same way for each frame that you intend to stitch together, which is pretty impractical if you want to get the light off-camera (which you usually should), and virtually impossible if you want light coming from more than one direction. So for panoramas, continuous, low-level lighting offers a great solution. Once the lights are set up the lighting will stay consistent from frame to frame, allowing you to move the camera and capture a panorama sequence. The biggest challenge is figuring out how to light a broad area in an interesting way, while keeping the lights themselves out of the picture.

So which is better: light-painting with a hand-held flashlight, or continuous, low-level lighting with LED panels on stands? Neither. They both have advantages and disadvantages, and both have their place. It’s nice to have choices, and anyone serious about lighting landscapes at night should learn how to do both. (For more information about low-level lighting you can start with this article. For light-painting, I recommend my friend Lance Keimig’s book Night Photography and Light Painting. Also, at the bottom of this page, under “Related Posts,” I’ll link to some of my posts that give detailed descriptions of how I lit certain images.)

Below you’ll find a few more images I made at night in Death Valley this past spring, with extended captions to explain how they were made. In one I used a hand-held flashlight; in two others I set up continuous lights on stands. The rest were made with natural moonlight.

In each of our workshops we pulled virtual all-nighters. We headed out to the dunes before the moon rose to capture images with the Milky Way, then photographed the moon rising, then made images of the dunes lit by moonlight. And when the dawn started to brighten the sky, and wash out the moonlight, we thought what the heck, we may as well stay for sunrise.

Being out in the dunes for hours under the stars and moon was peaceful, serene, and beautiful. I love the dunes at any time, but at night they’re just magical. 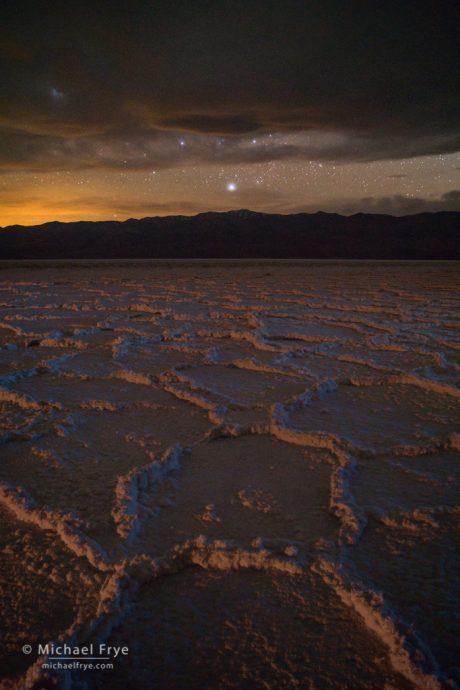 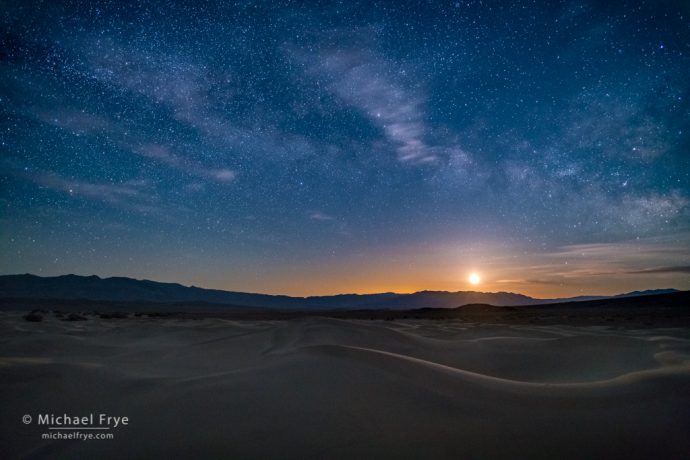 Moon rising over the Mesquite Flat Dunes, Death Valley. A brighter moon would have washed out the stars, but here the moon was only about 30-percent full, allowing the stars to show clearly. (20mm Rokinon lens, 15 seconds at f/2.8, 5000 ISO). 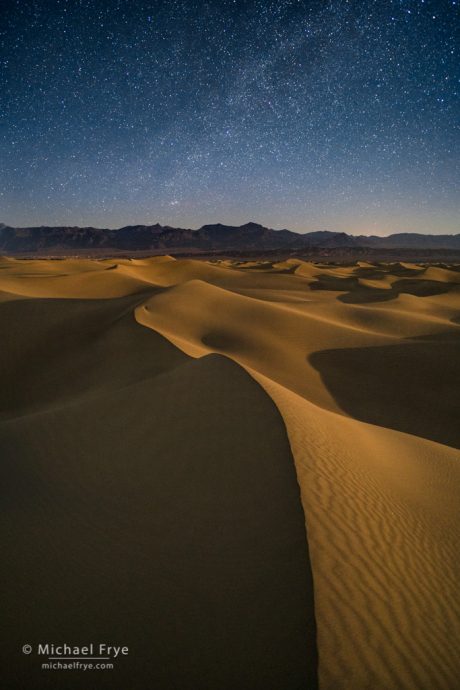 Moonlight on sand dunes underneath the Milky Way, Death Valley. After the moon rose we photographed the dunes lit by low-angle moonlight. This was just like photographing the dunes under low-angle sunlight, but with longer exposures, and stars above. (20mm Rokinon lens, 20 seconds at f/2.5, 5000 ISO) 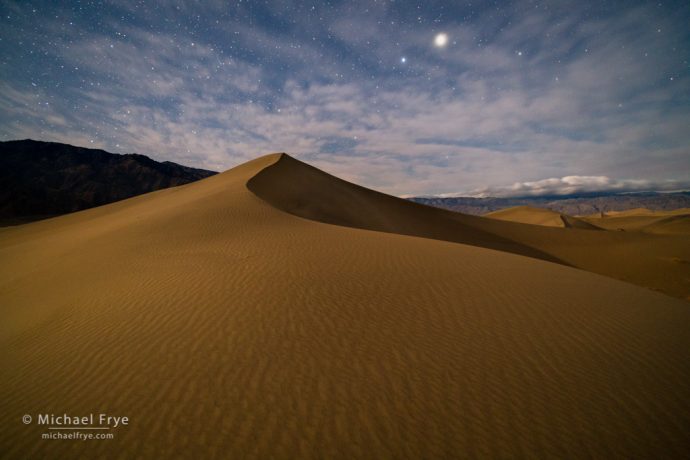 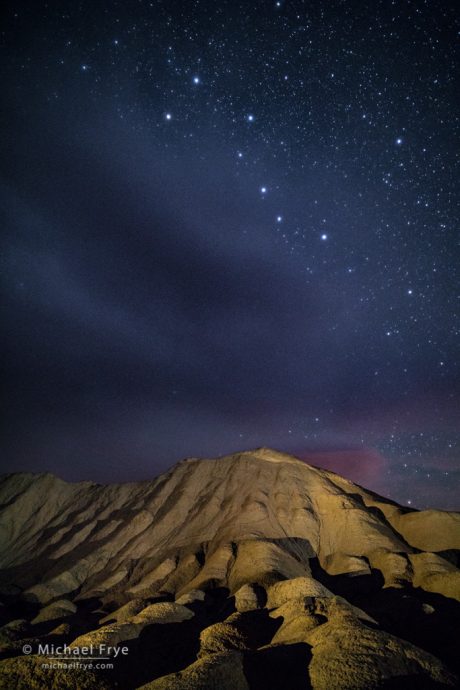 Twenty Mule Team Canyon with the Big Dipper, Death Valley. We set up continuous, low-level lighting for this scene too, so that our workshop group could photograph this view without coordinating exposures for light-painting. (Rokinon 20mms lens, 20 seconds at f/2.5, 5000 ISO.) 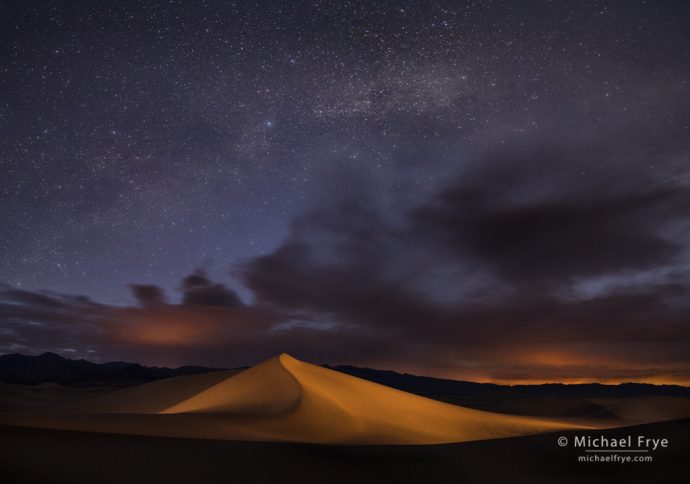 Sand dune and Milky Way, Death Valley. I made this image on a scouting trip before our workshops. My original intention was to make a panorama, so I set up continuous, low-level lighting on this dune. This time, however, I used two Fenix FD40 flashlights, rather than LED panels. The Fenix lights have five different brightness settings, with an adjustable beam, and the light is beautifully even when the beam is at its widest. They even have a tripod thread. These lights are expensive, however (about $100 each), and their native color is cool and slightly greenish, so you have to filter them. Here I used orange gels over each light, and set them to light the central dune from each side, and highlight the dune’s curving ridge. This final image is actually only part of a stitched panorama, as I ended up liking this section of the panorama better than the whole thing. (Rokinon 20mm lens, each frame 20 seconds at f/2.8, 3200 ISO.) When I returned to this spot less than two weeks later, this dune was completely gone! Some big wind storms had thoroughly reshaped the dunes.