Stars, Orion, and zodiacal light over an eroded gully, Death Valley. Robert Eckhardt, Claudia, and I found this twisting gully while scouting for the workshop, and I thought it might line up well with Orion and the zodiacal light just after dark. It was actually Robert’s idea to light-paint the gully, though he didn’t join me on the night I photographed it. The focal length had to be very wide (16mm) in order to fit everything in the frame. I made eight exposures for the sky, each at 15 seconds, f/4, ISO 12,800, and blended those together with Starry Landscape Stacker. I made another longer exposure to record more detail in the landscape (4 minutes at f/4, ISO 6400). Then I captured four light-painting frames, adding a little light from the right and left, and tracing the gully with a flashlight as I walked beside it. All these images were blended together in Photoshop.

Death Valley has been used as the setting for many Hollywood movies. Not surprisingly, some of these films use the austere, other-worldly landscapes of Death Valley as a stand in for another planet. (This includes two titles from the original Star Wars series – Episode IV: A New Hope, and Episode VI: Return of the Jedi.)

This same other-worldly feeling works beautifully for night photography. I’ve made many nighttime images in Death Valley, and had a chance to capture a few more both before and during our recent workshop there. We had some challenging conditions at times, with wind, and plenty of clouds. But we also had one clear, calm night out in the dunes.

Night photography can get quite complex. All four of the images shown here involved multiple exposures, for various reasons. With the dune panorama I stitched five images together in order to fit the entire arc of the Milky Way in the frame. With the other images the camera stayed locked on the tripod, but multiple frames were used to blend exposures for the sky (either pinpoint stars or star trails) with light-painting images. I’ve included detailed captions to explain how each photograph was made. 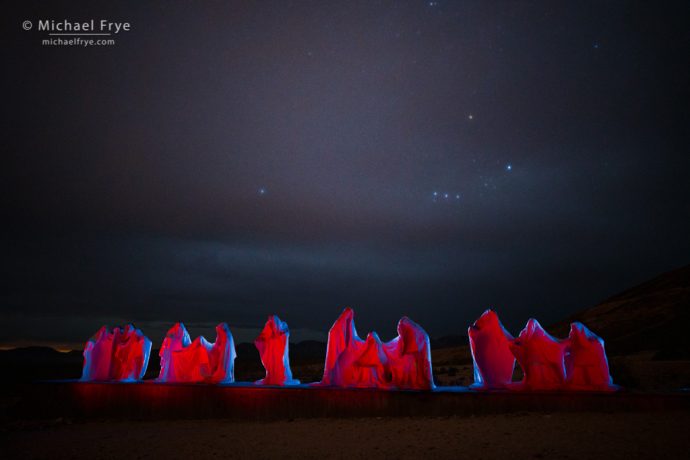 “Last Supper” sculpture at night, Rhyolite, Nevada. We had lots of clouds on the first night of the workshop, so I decided to take the group to Rhyolite, which I thought would work even without many stars in the sky. We photographed one of the old buildings, then tried lighting this sculpture of the Last Supper by Belgian artist Albert Szukalski. At one point Orion poked out the clouds, adding a few stars to the scene. This image is a blend of five exposures: one for the sky, and four light-painting frames. One of our participants, Al, tried using his red headlamp to light the front of the figures, and that worked really well. 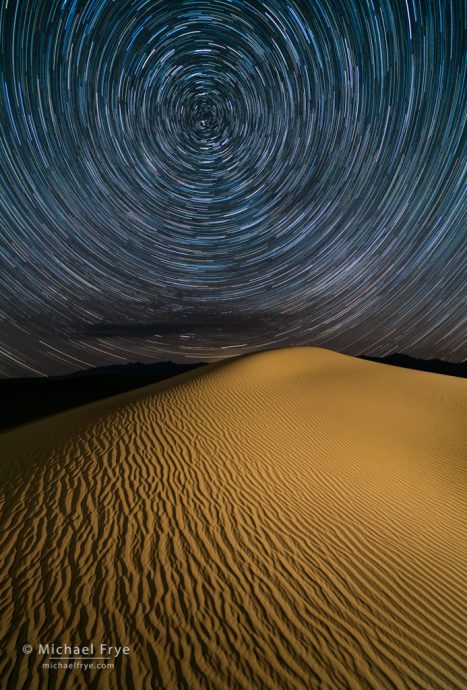 Sand dune and star trails, Death Valley. On our night in the dunes we found this beautifully-rippled dune that aligned with the North Star. My star-trail sequence consisted of 15 frames, each 4 minutes at f/4, ISO 800. These were blended together in Photoshop, along with two frames where we light-painted the dune from the left and right.

Milky Way over sand dunes, Death Valley. We captured panoramas of the Milky Way during the wee hours of the morning. This image consists of five frames stitched together with Lightroom’s Panorama Merge. I used my 16-35mm zoom at 16mm, and each frame was 30 seconds at f/4, ISO 6400. We set up three continuous, low-level lights to illuminate the dunes.