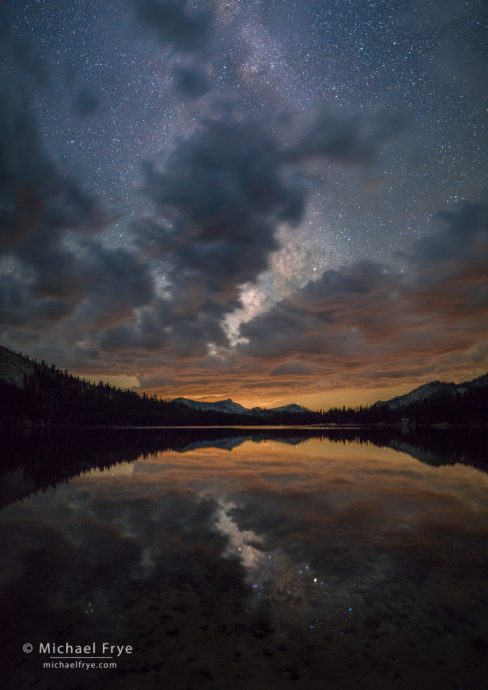 Clouds and Milky Way reflected in Tenaya Lake, Yosemite. A four-frame vertical panorama stitched together with Lightroom’s Panorama Merge; each frame was 20 seconds at f/2.5, ISO 6400.

On the first night of our recent Starry Skies Adventure workshop we started at Olmsted Point in the Yosemite high country. We had beautifully clear skies at first, despite our proximity to the Detwiler Fire. And the early-evening winds died down, making our group feel warmer, and also creating a chance to photograph reflections in nearby Tenaya Lake.

Before we headed to the lake some clouds started moving in from the east, but I didn’t mind. I love photographing nighttime skies with a mixture of stars and clouds. And that’s what we found when we got to the lake, with the underside of the clouds catching an orange glow from the lights of the Central Valley. Better yet, the wind was calm and the water still, creating beautiful reflections.

We spent the next 45 minutes or so photographing this scene as the clouds flowed by. I encouraged students to try capturing and stitching together a panorama to show a wider view of the scene. This can be challenging at night. I like to have at least a 50% overlap between frames when capturing a panorama sequence, but on a moonless night you can’t see much through the viewfinder, so it’s hard to pick out landmarks and figure out where that overlap occurs. The solution is to find a bright star near the middle or edge of the frame. If, for example, you’re capturing the panorama sequence from left to right, you could find a star on the right edge of the frame in the first shot, then move that star to the middle of the frame for the next image. Or, you could find a star in the middle of the first frame, then move that star to the left edge for the second exposure.

The photograph above, which turned out to me my favorite image from that evening, is actually a vertical panorama. It doesn’t have panoramic proportions; in this case I stitched frames together to achieve a wider field of view than would have been possible with one frame. Using my 20mm Rokinon lens, I turned the camera to a horizontal orientation, and started at the bottom, with the camera pointed at the water and the horizon near the top of the frame. For the second frame I pointed the camera up further until the horizon was near the middle of the photo (again, a 50% overlap). For the third image I put the horizon near the bottom of the picture, and then picked a bright star near the top of that photo and moved it to near the middle for the fourth frame.

Then I used Lightroom’s Panorama Merge to stitch these four frames together. Stitching a vertical pano can be tricky. When Adobe first added the Panorama Merge to Lightroom it would routinely fail at this task, creating all kinds of weird distortions. It seems to have gotten better over time, and now usually does a pretty good job with vertical panos, but it still often works better to turn the images 90 degrees before stitching them together. That’s what I did here: I rotated all four frames 90 degrees to the right (clockwise) in Lightroom, selected them all, and then chose Photo > Photo Merge > Panorama from the menu. I tried both the Spherical and Cylindrical projection methods, but chose Spherical in this case because it seemed less distorted. I also avoided using the Boundary Warp, as it bent the horizon.

One of the best things about Lightroom’s Panorama Merge is that it creates a fully-editable DNG Raw file. So I processed the merged panorama in Lightroom just like any other Raw image.

As I mentioned previously, we were really lucky to avoid the smoke from the Detwiler Fire, and had great conditions for the workshop – especially those beautiful, glowing clouds reflected in the calm waters of Tenaya Lake. It was a fun night.

Related Posts: Lightning at Mono Lake; Death Valley under the Moon and Stars