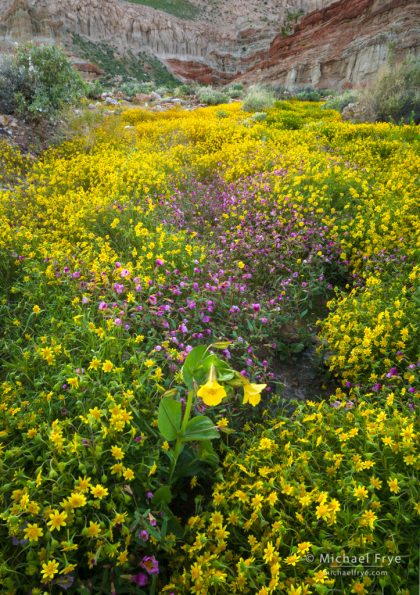 We just spent a week in Death Valley teaching a workshop, and had a great time, despite some windy conditions. On our way home last Thursday Claudia and I stopped at Red Rock Canyon State Park (just north of Mojave), and found some beautiful patches of flowers. I’ve included my favorite image of the afternoon here, with goldfields and two species of monkeyflowers underneath the rock formations the park is famous for.

This composition is built around the two yellow monkeyflowers about a third of the way up from the bottom of the frame. When I spotted these two flowers I knew they would provide a great focal point – something for the viewer’s eyes to latch onto before roaming through the colorful mass of blossoms behind them to the red rocks beyond.

Including those red rocks required using a very wide lens (20mm). That, in turn, meant getting the lens really close to those two monkeyflowers, otherwise the wide lens would make them look tiny. I also had to get the camera down low enough to make the “face” of the left-hand monkeyflower visible. I ended up with the lens about a foot away from those two flowers, and about a foot off the ground. This required stretching both my legs and the tripod legs out to the sides of this little wash to avoid crushing dozens of flowers.

With the foreground flowers so close to the camera I needed to focus-stack to get enough depth of field to render everything sharp. This procedure was complicated by some gusty winds, but eventually the winds died long enough to capture three frames focused at different distances. (The first was focused on the two monkeyflowers, the second at about three feet, and the third at about ten feet. The settings for all three were 1/8 sec. at f/16, 400 ISO.) I blended these three exposures by hand in Photoshop using layer masks. (For more about focus-stacking, see this post.)

The low camera position and wide-angle lens make this patch of flowers look bigger than it was. The flower-filled section of a wash visible in this photograph is only perhaps five feet wide and twenty feet long. But there were patches of flowers throughout the park, and it was fun seeing such lush blooms in this desert environment. There was even water still running through the washes in spots.

But the copious rains in California over the last few months should create even more extensive blooms in other desert and semi-desert areas of the state. We’ve been seeing reports of a great bloom in Anza-Borrego Desert State Park, attracting large crowds and generating traffic jams. While the flowers in Anza Borrego are mostly past peak now, the bloom is spreading further north, and there should be some excellent wildflower displays in other areas of California over the next few weeks. You can check the DesertUSA and Theodore Payne sites for updates on the latest conditions.

But despite all the rain, I don’t expect a good poppy bloom in the Merced River Canyon west of Yosemite. The best poppy blooms in this area occur in dry years with a few well-timed storms. In wet years the poppies get crowded out by grasses. I haven’t been up that way since we got home, but I hear there are redbuds blooming, and a variety of other flowers, but no big patches of poppies. This year you’ll have to look elsewhere for large swaths of poppies (like Antelope Valley and Gorman).

Claudia and I plan to go wildflower hunting soon, and are looking forward to a great spring. There’s nothing like a little flower therapy.