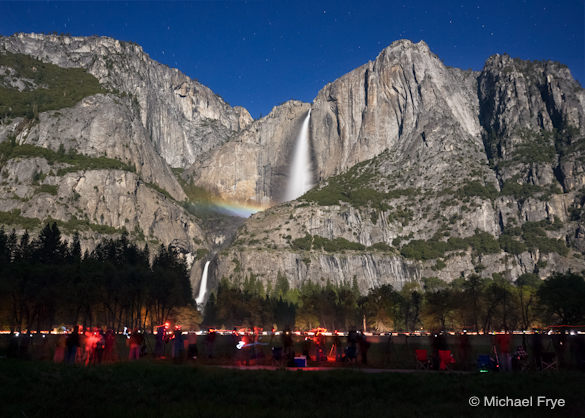 Photographers under the lunar rainbow in Cook's Meadow, May 5th

I hope that saying, “Better late than never” is true—at least this time! I’ve been really busy the since the full moon, but here, finally, are some photos of the lunar rainbow from May 4th and 5th.

The previous night my friend Jon McCormack and I grunted up the Yosemite Falls trail to a spot with a profile view of the upper fall. I’d photographed a lunar rainbow from this spot in 1996, but back then I didn’t have a wide enough lens on my Mamiya 645 to include Half Dome and the whole waterfall, so I thought it was time to try it again. 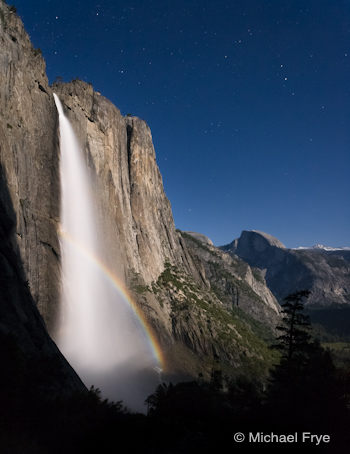 Half Dome and Upper Yosemite Fall with a lunar rainbow, the night of May 4th

I wasn’t sure there would be enough mist for a good lunar rainbow from this location, but just when the rainbow appeared the wind kicked up. This made it really cold, but also blew the spray around and made the waterfall look bigger, and the rainbow last longer. It turned out to be almost ideal conditions for this photograph.

It was a long night; I got home as dawn was breaking and birds were starting to sing outside my house in Mariposa. But Jon and I had a great time. It was wonderful hearing and seeing this huge waterfall from up close on a beautiful moonlit night.

Another celestial event is coming up this Sunday: an annular solar eclipse will be visible over parts of northern California, Nevada, Utah, Arizona, New Mexico, and Texas, as well as many other parts of the world. If the weather cooperates the eclipse could be photographed fromd some beautiful locations, including Redwood, Lassen, Zion, Bryce, and Grand Canyon national parks, Monument Valley, Canyon de Chelly, and Chaco Canyon.

An annular eclipse differs from a total solar eclipse in that the moon isn’t quite big enough to block out the whole sun, so the outer ring of the sun still appears. You can see photos, maps, and a video on NASA’s site, and a video animation showing the path and timing of the eclipse here.

I wish I could give you some advice about photographing this eclipse, but I’ve never photographed a solar eclipse before, so I’m just gleaning information off the internet like everyone else. I found some useful articles here, here, and here.

The usual caution about solar eclipses applies: don’t look directly at the sun unless you’re wearing protective glasses. From descriptions I’ve read the sun might be bright enough, even during the darkest part of the eclipse, to cause lens flare—but I don’t know. The eclipse will occur near sunset in New Mexico and Texas, which will make the sun dimmer and help avoid potential flare.

I’m planning to head north for the eclipse, though I’m not sure where yet. Maybe Lassen, but I’ll check the weather reports first. If you try photographing the eclipse let me know how you make out! 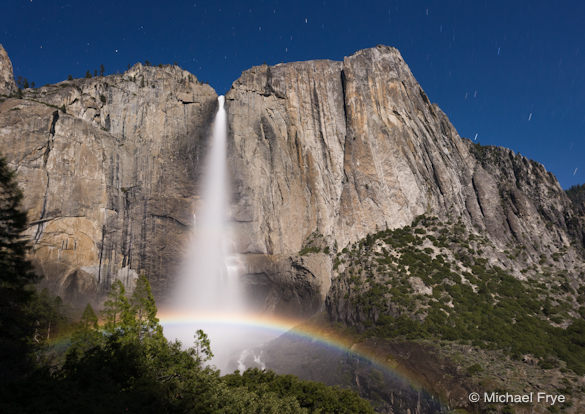 Lunar Rainbow, Upper Yosemite Fall, the night of May 4th