Light and Mood With Intimate Landscapes 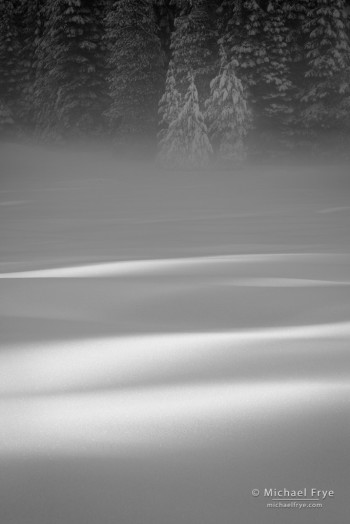 A Trip to Crane Flat

Yosemite got some much-needed precipitation last week – over an inch total. I kept checking the radar and satellite images online, looking for an opportunity to photograph a clearing storm. Friday morning seemed promising, so I drove up to Yosemite Valley early, but found no snow. It looked like the snow level had been around 5,000 feet, higher than forecast. Worse, from a photographic perspective, the skies were clear and there was no mist.

Shortly after sunrise I noticed light striking a ridge near the tunnels on Highway 120, and on a whim decided to drive up to Crane Flat. I thought Crane Flat would at least have some fresh snow, since it’s at 6,000 feet.

Indeed there was fresh snow – over a foot of it. I parked at the Tuolumne Grove trailhead and walked along the plowed road. The sun had just reached parts of the main meadow, and I found some interesting small subjects to photograph, like tree-shadows on the snow.

Some shafts of sunlight slanting across the snow caught my attention, and then some mist began rising near the edge of the meadow, behind the shafts of light. I immediately recognized the potential to make an image that went beyond an abstract study of shadows – a photograph that had a mood.

But to get the composition I envisioned required leaving the road and wading out into the snow beyond some scrubby aspens. At first this was easy. The new snow was light and fluffy, and the older snow beneath held my weight. But after about ten steps I broke through the crust of that older snow and sank in up to my thigh. The same thing happened with the next step, and the next. It quickly became apparent that I wouldn’t get very far; even going 50 feet would be exhausting. But I managed to move beyond the scrubby aspens and get a clear view of the meadow.

The light and mist were still there, but the composition needed another focal point, something besides the streaks of light, so I included a clump of small firs near the top of the frame. I made a number of different compositions, both horizontal and vertical, some with more trees, some with less, some with no trees. But I like this tight vertical best. The image works better in black and white; color is just a distraction here.

After I made these images I tried to move around a stand of trees to my right, but at one point my left leg broke through the snow more deeply than before, and got stuck. It felt like my boot was set in cement, and it wouldn’t budge. I had to set down my tripod, take off my pack, and dig out the snow around my leg with my fingers to free myself.

At that point the mist was dissipating anyway, so I gave up and headed back to my vehicle. Note to self: keep a pair of snowshoes in the car.

Landscape photographers often pay attention to how the sun strikes mountains, and shorelines, and other large features. But we often don’t notice small-scale lighting events, like the light and mist at Crane Flat, because we’re focused on the big landscapes, and because these intimate light shows are hard to predict. You can’t see them from a distance; you have to be in the right place at the right time, and be alert, to even realize the possibilities.

I actually anticipated the light at Crane Flat – sort of. I knew that early and late in the day you often see shafts of sunlight shining through gaps in the surrounding forest, and slanting across the meadow. What I didn’t anticipate was the fleeting appearance of mist, and that element made all the difference. Having seen that, I’d guess that mist appears regularly in this meadow in the winter around dawn and dusk. When air settles down in the meadow and meets snow, the air cools, and water vapor condenses and creates fog.

I’ve photographed many small-scale lighting events over the years. Some of these I anticipated, some I didn’t. This next image is one I didn’t anticipate. My friend Mike Osborne and I spent an hour or so photographing a lupine field near El Portal, then decided to drive along the Merced River just to see what we might find. Some thin clouds overhead were catching the light of the late-afternoon sun, and Mike and I noticed the gold reflections these clouds created in the water. We decided to stop at a bend in the river, and thrashed through some brush out to rocks at the water’s edge, where I immediately noticed the bush in the middle of the river, surrounded by water.

It’s great to find interesting light – in this case, the gold reflections – but that’s not enough. You need to create a coherent composition to complement that light, and the bush provided a perfect focal point, something for the eye to rest on before exploring the textures and colors of the water. The bush surrounded by rushing water also told a story about springtime floods. 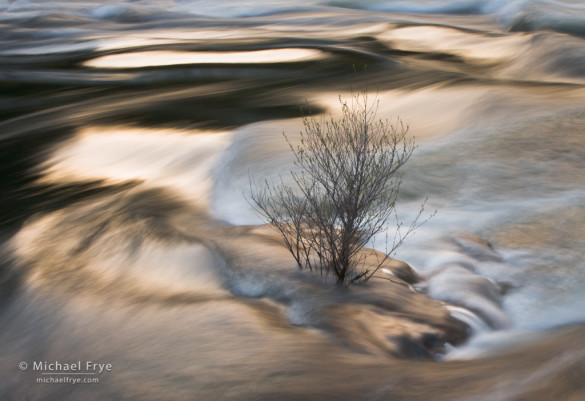 The next photograph had an element of planning. I had photographed this high-country meadow in Yosemite many times, and knew that late in the day shadows fell across it, created intriguing juxtapositions of light against dark. But this light is fleeting. I would see a possible composition, but by the time I reached the right spot the light would be gone. So I kept coming back, trying to be in the right place at the right time.

On the afternoon I made this photograph I positioned myself along the edge of the meadow as the shadows moved across, and made the image I anticipated. But, as sometimes happens, it didn’t look as good as I’d hoped. So I kept looking for something better, and practically sprinted up a hill to get ahead of the moving shadow, where I found these backlit lupine and cow parsnip perfectly juxtaposed against a dark background. 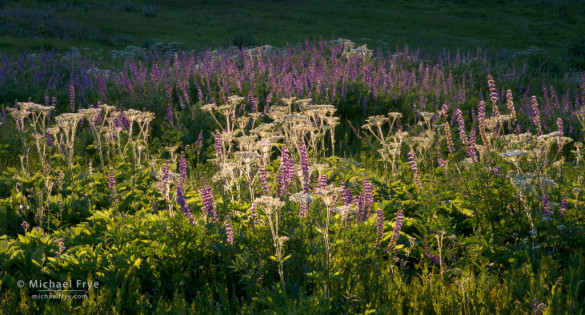 I made the next photograph during a trip to South Carolina in November of 2011. Some former students and their friends brought me out there to lead a workshop, and one morning we visited this waterfall, Twin Falls (this is the left-hand fall). After photographing a variety of different compositions in the shade, the sun started to move around the hillside and hit the water, and suddenly I noticed shafts of light slanting through trees and raking across the waterfall. Again, there was immediate recognition of the potential of this scene, and I started yelling at everyone within earshot to come over and look at the waterfall from this angle. 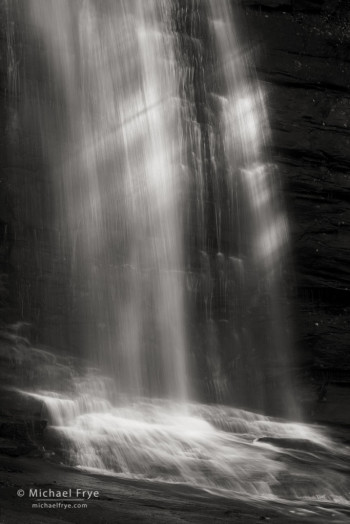 I have a lot of examples of these small-scale lighting events, but I’ll limit myself to one more. This was made last fall over on the eastern side of the Sierra. Two private workshop students and I were photographing misty scenes with fall color along a creek, in the shade. We were thinking of getting some breakfast when we noticed that the sun was about to hit us, and I remembered a nearby spot that I’d photographed the year before, where the aspens were beautifully backlit when the sun first hit them.

So we went to that spot, and saw that same beautiful light. But one of my students, Bryan, also noticed something else. I came over to look, and found sunbeams bouncing off water and reflecting upward into the mist. Small waves caused the light rays to move rapidly across the mist from left to right, like strobes. I’d never seen anything like it before. 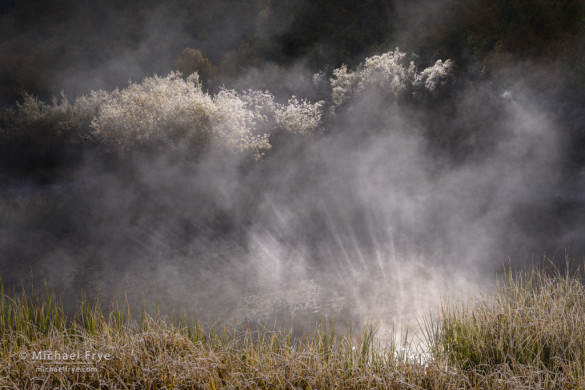 Sometimes these events are once-in-a-lifetime, unrepeatable moments. But usually they’re not. What are the odds that my students and I stumbled upon that strobe-light show the only time it ever happened? Slim. In fact, those sunbeams probably appear on many autumn mornings at that spot. All it takes is sun and mist, and mist is common along that creek on cold October mornings.

So if you see one of these lighting events, think about the circumstances that created it, and whether the same conditions might recur. Even if you miss the photograph the first time you might have an opportunity to come back.

I love photographs that capture a mood, that convey the feeling of a particular time and place. When we think of mood in landscape photographs we usually think of big, sweeping scenes with spectacular light and weather: a clearing storm, a rainbow, sunbeams shining through mist, etc.

But small, intimate scenes can capture a mood too, and convey just as much emotional power. Sometimes all it takes is one special ingredient: mist, or sun hitting the right spot, or an interesting reflection. Finding these moody small scenes requires alertness and mental flexibility. You have to be willing to drop your preconceived plans and accept the gifts that you’re given. And keep snowshoes in your car just in case.