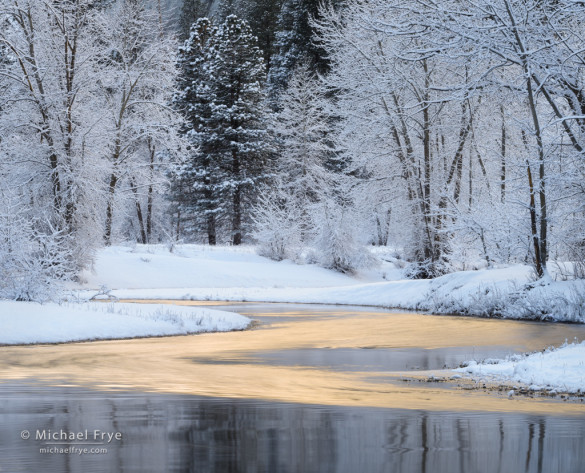 Reflections along the Merced River, winter, Yosemite. I tried several different versions of this photograph. I initially wanted to include a wider view, with more trees on the sides, but a distracting log just out of the frame on the right bothered me. In the end I liked this tighter, simpler, distraction-free version better.

Yosemite Valley received two doses of snow this past weekend, first on Friday night, and then again on Sunday night. I wasn’t able to make it up there on Saturday, but Claudia and I drove up early Monday morning after the second snowfall.

The storm had cleared around midnight, and temperatures then dropped down to 25 degrees. Below-freezing temperatures inhibit the development of fog and mist, so the skies were clear when we arrived in the valley. But we found three to four inches of fresh, fluffy snow coating all the trees.

Without mist I decided to concentrate on more intimate scenes, especially trees, and reflections along the Merced River. Situations like that are an exercise in seeing – or at least they are for me. Beautiful little scenes were catching my eye everywhere, but when I tried to frame them it was hard to find compositions that worked. There was often something distracting that disrupted the flow, or some other issue that wrecked an otherwise promising prospect. So I had to look more deeply to find something that would make a clear, cohesive statement.

Often the version that worked best was the simplest. That is, I had to pare the idea down, and include only the elements that were absolutely essential to communicating that idea. And sometimes I had to compromise. Perfect compositions are rare, and sometimes you have to be willing to exclude something you’d like to have in the frame, but that just doesn’t fit with everything else. Or sometimes you have to live with a minor distraction or imperfection, trusting that the strength of the other elements will make up for it.

On Monday morning I spent a lot of time along a stretch of the river with lacy alders and golden reflections. Again, it was beautiful, but I kept reaching compositional dead ends. I’d find some pretty little scene, with obvious potential, only to be stymied by an intervening trunk or branch, or a distracting log. But I kept looking, exploring virtually every possible vantage point, and eventually found some compositions I liked, that seemed to convey a little bit of the feeling of that snowy morning. I’ve included some of those here, as well as a snow-covered oak image, with extended captions to explain my thought processes.

There are times when photography seems easy, and everywhere you look images seem to compose themselves. There are other times when good compositions seem elusive. But either way, I always enjoy the process of looking, of visually exploring the world around me. When I don’t find a perfect composition right away I’m forced to look more closely, notice things that I hadn’t seen before, and engage with my surroundings on a deeper level. That process, that experience of looking at the world more deeply, is, to me, perhaps the most rewarding part of photography. 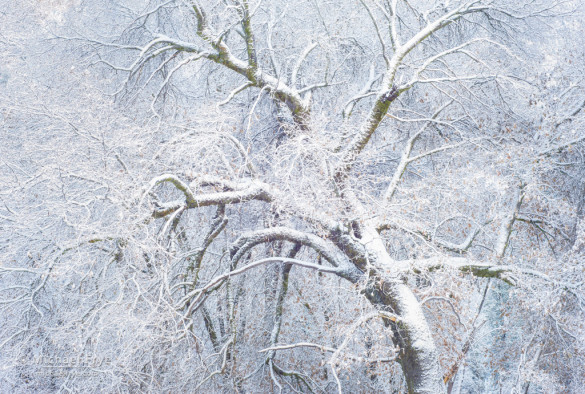 California black oak in snow, Yosemite. I’ve photographed this oak before, but it looked particularly nice Monday morning, so I couldn’t resist trying again. To me, the shapes of the trunk and branches are the most interesting part of this tree. Including the snow-covered meadow below, or the cliffs above, would have pulled attention away from the essentials. 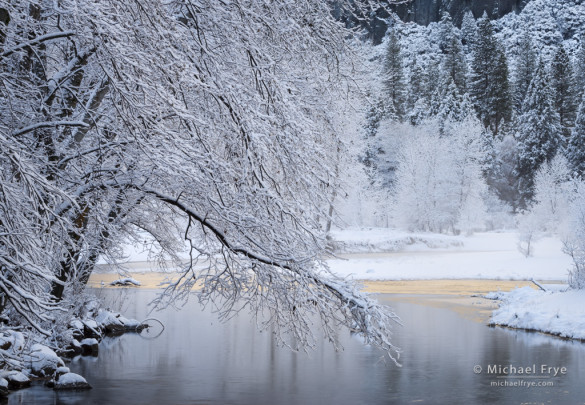 Alders along the bank of the Merced River after a snowstorm, Yosemite. I loved this scene, with the delicate, snow-covered branches hanging over the water. But the composition was a challenge, as intervening branches or rocks kept getting in the way. Eventually I found this distraction-free view, with gold reflections behind the alder to add color, and the river and trees in the background to convey a sense of the place. 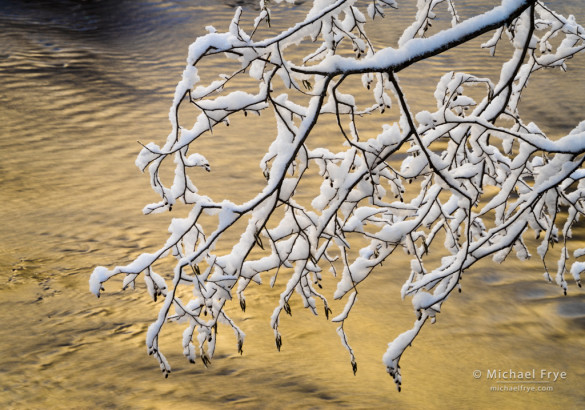 Snow-covered alder branches hanging over the Merced River, Yosemite. This photograph is a distillation of ideas from the previous image, filling the frame with delicate alder branches, golden reflections, and nothing else. It’s clean and simple, but more abstract.